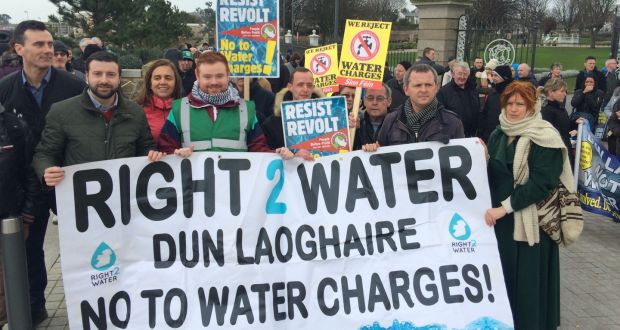 People Before Profit are opposed to paying twice for our domestic water service. For this reason, among others, we are opposed to paying an extra water charge. Water has traditionally been paid for through central taxation and it should continue to be funded in this manner. Historically, governments have underfunded the water network, but during the economic crisis the funding shortfall increased substantially. The political establishment used a hypocritical rhetoric about conservation, but they really saw water charges as a revenue raising device. People Before Profit rejects this logic.

The Right 2 Water movement defeated the proposed water charges. They forced the government to stop collecting the charge and even had to hand back money to those who had paid. This showed just how effective ‘people power’ can be.

However, we should remain on our guard, as the Fine Gael-Fianna Fail alliance will try to introduce water charges through the back door, in the form of ’excess charges’.

Irish Water was set up on a ‘Public Utility Model’, 51% state owned, with the balance coming from private funds.

It is run as a commercial concern with shareholders seeking maximum returns and lenders demanding commercial interest rates. PricewaterhouseCoopers (PwC) who proposed the model for Irish Water stated that, ‘The public utility model is the most attractive proposition to lenders and is understood by investors who lend to water sectors in other countries.’

People Before Profit favours the abolition of Irish Water. It has been set up as a Trojan horse for commercial interests.

A central body to manage our water and wastewater services is not necessarily a bad idea in itself. Ireland is a small country and water supplies don’t match up, or stop at, county, town or city boundaries. Major investment is required to fix a leaking system and to ensure clean water supplies for the future.

However, this can be done by a public agency that is not beholden to private interests. For this reason People Before Profit support the idea of a National Water Body under public control and working alongside local authorities.

People Before Profit rejects the argument that public money should be spent on metering, rather than fixing the piping infrastructure. Metering of water will cost an estimated €1 billion, but this money would be better spent on fixing leaking pipes.

Countries with the highest level of metering, such as the US and Canada, also have the highest consumption. Around 61% of Canadian homes are metered, yet consumption per person is 300 litres a day. In the US where metering is nearly universal, consumption is 425 litres per person per day, almost twice and three times respectively the Irish consumption of 160 litres.

Investment in the infrastructure and its maintenance would be more cost efficient in conserving water than metering.

The EU and Water Charges

The EU has a Water Framework Directive which is used to pressurise member states into introducing water charges. The Lisbon Treaty also states that ‘services of general economic interest’ are subject to the laws of competition – meaning, opening up a market to private corporations. If there is a charge for water, these articles can be invoked to open the way to privatisation.

Privatisation of water provision would be a disaster as the experience in Britain shows. Water prices increased and there was a sharp rise in the number of households being disconnected. The situation was so bad that the Daily Mail, a staunch Tory Party supporter, was driven to run a feature in 1994 titled ‘The Great Water Robbery’. In order to prevent this, People Before Profit advocate:

People Before Profit favours a strategy of real water conservation.

A major proportion of our expensively treated water is used for applications that do not require water refined to a high standard.

On mainland Europe it has long been the practice for homes to have two separate plumbing systems. The main treated water supply is fed to sinks and baths and appliances that require it. The run-off is then recovered, filtered and pumped to areas where the same level of quality is not needed, like toilets and gardens. This practice is known as ‘Grey Water Recovery’ and could do a lot to decrease our dependence on treated water and conserve our stocks. Grey water would be suitable for almost 40% of the average household demand.

Ireland has a relatively high rainfall (over 1,250 mm per year) spread over the entire year. Most of the water that falls from the sky in this country comes in from the Atlantic and is therefore relatively clean. It is also extremely ‘soft’ and has none of the lime scale problems associated with water from river, spring or well sources.

Given these conditions, People Before Profit advocates harvesting rainwater. Some of it will have to be retro-fitted to existing buildings. But it should also be a requirement for all new buildings, both in rural and urban areas.

Another advantage to this kind of approach is that the retro-fitting work could create around 5,000 jobs for about three years, giving a much needed boost to construction sector employment.

It would also go a long way toward addressing the projected shortages for the greater Dublin area where one of the ‘solutions’ being considered is to bring water across the country from the Shannon with a huge potential environmental impact and a cost of up to and beyond €800 million.

Siteserv is a conglomerate of Irish building-related companies pulled together during the Celtic Tiger boom. The Irish Bank Resolution Corporation (IBRC), the former Anglo Irish Bank gave Siteserv a loan for €150 million, but got back just €50 million, writing off the remaining debt of €100 million.

Siteserv then went on to win a contract to install water meters and made handsome profits.

The manner which this company was favoured by state agencies requires serious investigation.