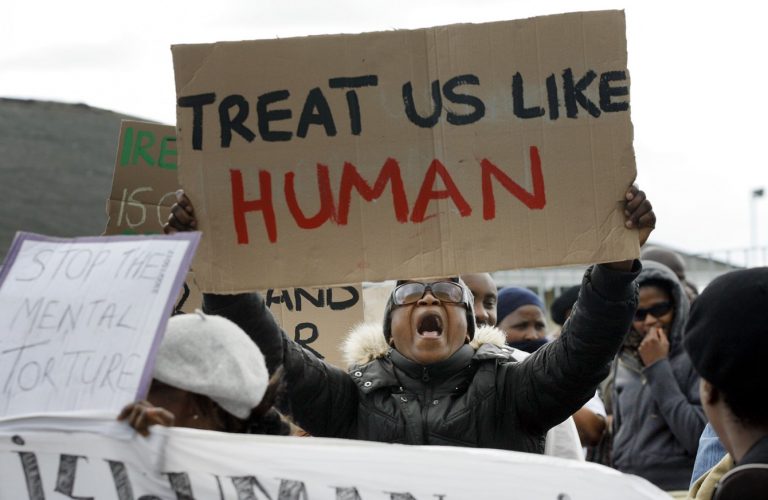 People Before Profit stands against racism in all its forms, including Islamophobia, anti-Semitism, and anti-Traveller racism.

Racism became a major force in the modern world as a justification for slavery and empire. Later, it was used by the rulers of capitalism to divide and conquer, setting ordinary people against each other to the advantage of the elites and their rotten governments. Racism is based on a reactionary myth.

People have been moving across the world in large numbers since the dawn of history. With the exception of the Native Americans, for example, who arrived about 20,000 years ago, the entire population of North and South America have arrived at various points in the last 500 years. Without migration, human development would have been impossible. The Irish have been forced, by poverty and unemployment, to emigrate to many parts of the world where they have made a huge contribution to the culture and economy of their destinations as well as playing a crucial role in the development of the international labour and socialist movement.

Just think of James Connolly as one example. We absolutely reject the view that immigration causes unemployment, that immigrants ‘take our jobs’ or that immigrants are responsible for the housing shortage or the state of the HSE. These social problems derive from an economic system based on production for profit and capitalist governments that serve the interests of the rich. Where unscrupulous employers try to use migrants as ‘cheap labour’ our answer is to fight alongside those migrant workers for decent wages for all, not to object to the presence or employment of ‘foreigners’.

Immigrants are welcome here. Their presence enriches our society and brings both economic and cultural benefits. We seek to unite with them in the struggle for a better Ireland and a better world. We are completely opposed to the politics of scapegoating minorities and expect all our public representatives and spokespersons to combat it.

People Before Profit is opposed to the policy of ‘Fortress Europe’ which is designed to keep out migrants, asylum seekers and refugees. This policy has already led to the deaths of thousands of people with many more being trafficked into slavery due to their vulnerable positions. We believe that

Travellers are Ireland’s indigenous minority who have lived as a distinct ethnic group. They have long been subject to massive racist discrimination and bigotry, resulting in major economic, social and political deprivation and disadvantage.

Statistics on life expectancy, health, employment, educational attainment and poverty all confirm that Travellers are one of the most oppressed groups in Irish society. This oppression has been added to in recent years by huge cuts in services to Travellers. This racism and oppression must be fought and reversed.

One symptom of decaying capitalism is the rise of racist and fascist organisations. Typically these organisations use racism as the principle lever for dividing the working class, attacking the left and building support for themselves. In so far as they succeed, they pull the whole political climate to the right.

Up to now, the far-right has not gained any significant electoral in Ireland (with the exception of right-wing loyalism in the North) but there is no room for complacency. It is clear from everyday experience, there is also a significant form of racism in our society, particularly with the cry ‘we should look after our own first’. Luckily United Against Racism and Le Cheile have emerged as key anti-racism and anti-fascist organisations. People Before Profit supports both and works alongside its members in their key initiatives.

In terms of the far-right, the following are our key objectives.