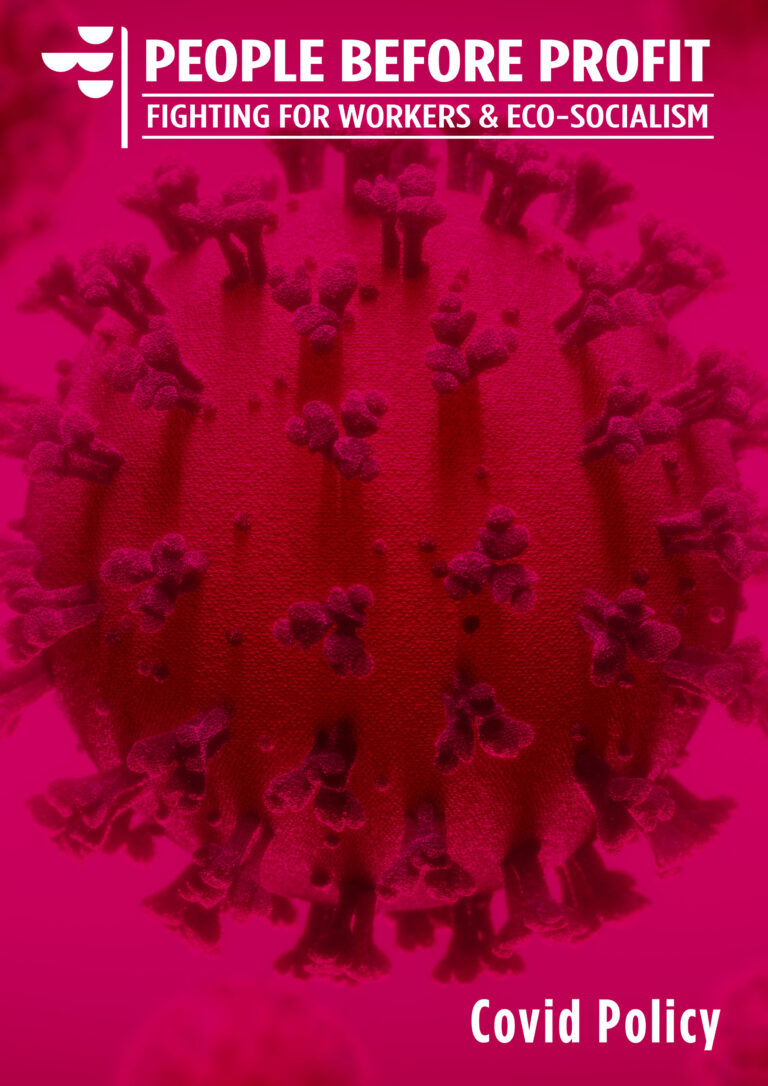 Covid Surge: This Government Has Failed

In March 2020, Leo Varadkar gave a Saint Patrick’s Day address on the dangers of Covid and called for solidarity in the face of the virus. People responded with admirable discipline, respecting lockdowns and achieving uptake of over 90% on vaccines.

Yet as we approach Christmas, these sacrifices appear to have been largely squandered by the government. Once again, they are having to introduce new restrictions. This time, they are blaming the Omicron variant.

But while Omicron is a major global concern, it has been widely accepted in the scientific community that if Covid-19 continues to circulate, new variants will continue to emerge. This government has refused to push for a waiver on vaccine patents so that these could be produced on a massive scale to protect the global population. Meanwhile, they have failed to implement the measures that would provide better protection for the population from new variants or from new waves of the virus.

The emergence of more variants is not just the result of a biological evolutionary process. It also results from the private ownership of the pharmaceutical industry and its drive for profits at all costs.

Despite the fact that a number of countries led by South Africa and Costa Rica have repeatedly asked the World Trade Organisation to lift patents on these vaccines, the industrialised countries have backed Big Pharma in their refusal to release vaccines or the technical know-how to enable producers across the developing world to make vaccines. The US and the EU have played a leading role in this opposition, attempting  to cover their tracks with talk of voluntary arrangements. Tragically, the Irish government supported the  EU’s backing of the global pharmaceutical industry in their refusal to remove patents, release scientific knowledge and technical know-how. It was a brutal case of profit before people’s health.

In June,  the South African president Cyril Ramaphosa told G7 leaders that a temporary lifting of Covid-19 vaccine patents was essential to save lives among Africa’s 1.2 billion people. Since then, South Africa has been the first country to discover Omicron. This does not mean that the variant originated there – a collaborative network of laboratories and scientists engaged in genomic sequencing research and the strategic sequencing of samples meant that Omicron was discovered there earlier than anywhere else. The fact is that these scientists have done the world a favour in sounding the alarm, but South Africa and surrounding countries were then punished with travel bans, when the variant had already undoubtedly spread elsewhere.

To compound matters, just 7% of people across the African continent had been vaccinated at the end of November. Across the Global South the landscape is similar. The fact that the poorest people in the world are being left unprotected is first and foremost a moral outrage. It also creates a space for new strains of the virus to emerge as the virus is given far more scope to mutate.

Months ago, People Before Profit warned that if intellectual property rules were not lifted and scientific knowledge on vaccine production made freely available, variants would spread quickly and come back to haunt us. Today only 40% of the global population has been vaccinated and so there is a large remaining pool for the virus to spread more easily and to mutate. This has now created the conditions for new variants to come back to affect those of us living  wealthier countries like Ireland.

Even though everyone knew that a fourth wave was coming, the FF-FG-Green government did nothing to prepare. Here are some basic mistakes they made.

Hospital Capacity: Ireland has a low number of ICU beds, just over half the OECD average. The government has also treated nurses terribly, forcing them to work longer hours for free, under the terms of a Croke Park agreement. The disillusionment of our health workers is summed up by the surveys of student nurses, which show that 90% of them plan to emigrate.

It did none of this and so today the health service is now at breaking point. Huge numbers of non-covid operations have been cancelled – even though there are already 900,000 people on hospital waiting lists.

Antigen Tests: These should have been made freely available from the start but instead this government dithered because it was worried about costs.

Now it wants parents to administer them to children. This is their substitute for maintaining a proper contact tracing system. Yet an antigen test costs about €6, or €30 for a box of five.

In Britain, people can receive two boxes of seven self-test kits for free from any pharmacy. In Spain, free antigen kits are available from test centres in some regions, while in Finland antigen tests are free to anyone who thinks they may have Covid-19.

Booster Shots: Christine Loscher is a professor of Immunology at Dublin City University. She said ‘It’s quite clear we should have been doing boosters weeks, if not months ago, to some of our population and this may have prevented some of the hospitalisations’. Yet the government is only now preparing a mass rollout.

Ventilation & Filtration: People Before Profit has had to introduce a special Workplace Ventilation Bill to force the government to act on this airborne disease. In September 2020, it was revealed that five out of six schools had inadequate ventilation. The government should have installed C02 monitors in every classroom because such monitors act as a useful proxy for air quality and ventilation in general.

In Belgium, if CO2 emissions exceed a certain level, the health and safety authority can give a workplace 24 hours to rectify the situation. We need similar measures in Ireland to protect workers – but this government has failed to act.

The €62 million being made available now for minor works in schools comes far too late. Moreover, the government should be supplying HEPA filters directly for every classroom, instead of the current proposals which will require schools to find their own HEPA filters. At the time of writing, 10% of COVID-19 hospitalisations are children.

Lies: The government repeatedly told the population that schools were safe. More than anything they wanted the political kudos gained from opening the schools. But they did nothing to prepare for these schools to be opened in a safe way. Instead, they dismantled the contact tracing system in school as a deliberate policy to hide the number of cases.

Covid brings into sharp focus the utter failure of right-wing politics in Ireland. It shows that we need to end the hundred year Fianna Fáil and Fine Gael rule. We must replace them with a real left government that is willing to defy the rules of capitalism and take whatever measures are necessary to protect people’s health.

Here are the policies which People Before Profit believe are urgently necessary to tackle the virus.