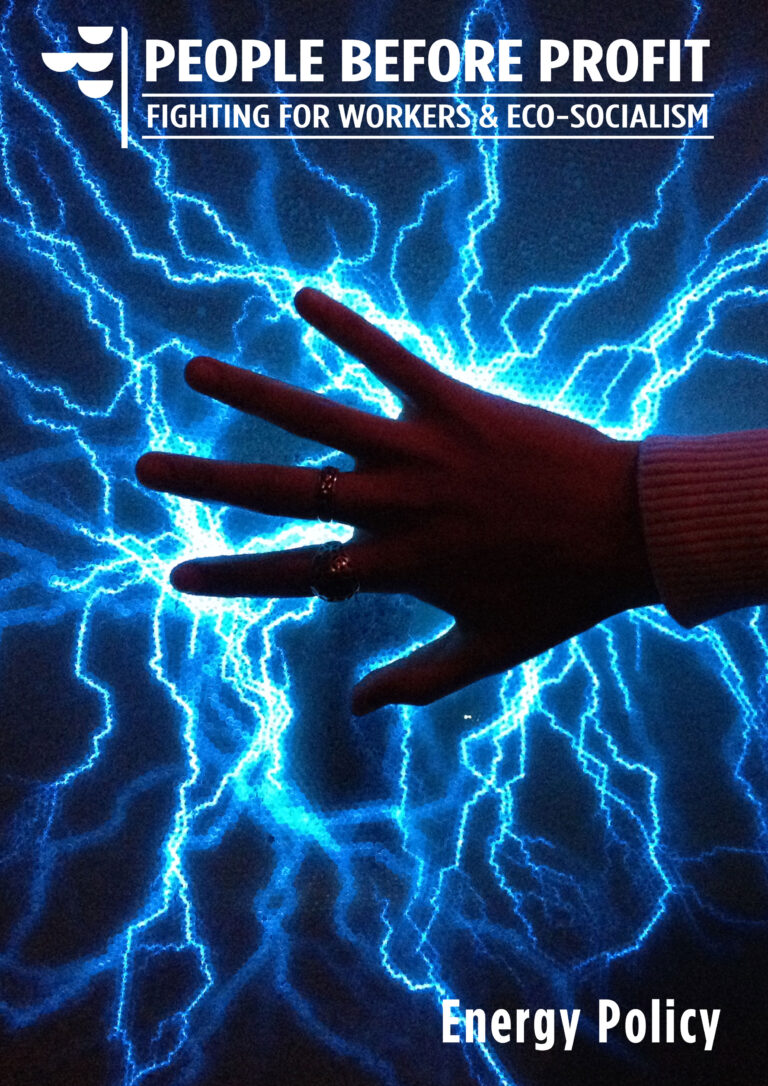 Ireland is a wealthy country, with an energy system that was once world-renowned for its speed, efficiency and competence from the 1920s onwards. Ireland can afford to take leadership on climate action in a just and fair way that leaves carbon space for the poorest and developing countries. We have the technology, we have the expertise; the only barrier is the focus on profit over people and planet.

Energy prices are rising across the global economy in ways that reflect how the capitalist energy markets are becoming increasingly dysfunctional and preventing our energy systems from being used as they should; ending energy poverty, fighting climate change and enhancing national energy security to avoid blackouts.

Global leaders have talked about a switch to renewables to stop climate change, but this is not happening in practice. Renewables are not replacing fossil fuel-powered energy worldwide, but only adding to overall energy use. This is a result of the system being focused on profit and not public good.

One example of this is the decline in gas prices in 2015, for example, led to the construction Liquified Natural Gas terminals rather than a prioritisation of energy efficiency or renewables.

Growing tensions in international politics also have a role in energy production with Russia being accused of refusing to increase gas supplies to Europe, or the US applying pressure on Germany to scrap the Nord Stream 2 pipeline. This is accompanied by promotion of US fracked and LNG gas.

However, blaming the broader global situation is a means for Irish politicians to wring their hands and act as though they are powerless to change anything. Socialists understand the anarchy of the global market leads firstly to a failure to reduce carbon emissions and secondly rising prices that hit ordinary people. But we also have policies to deal with the specific problems that confront the Irish energy sector.

People in the North spend 32% more on Gas and Electricity than the average household in the UK.

These high energy prices hit those that are already struggling. Ireland has one of the highest rates of deaths from cold-related diseases – 2,800 per year.[1] To put this in context, 2,300 excess deaths were recorded during the worst of the Covid pandemic between March 2020 and February 2021.[2] Those worst affected are the elderly, single parents and their children as well as Travellers.

Both electricity and gas bills in the South are composed of unit rates, standing charges and VAT calculated at a rate of 13.5% . Electricity bills include a Public Service Obligation levy (PSO) while gas bills also include a carbon tax. This carbon tax amounts to €41 a ton and this will rise to €100 a ton by 2030. The average household pays €73 a year in carbon tax and this will increase to €93 a year as early as May 2022.

While these indirect taxes are inherently unfair because they are applied to everyone regardless of their income, they are not the sole reason for Ireland’s unusually high energy prices. Even if these taxes were removed from the equation, Irish consumers would still be paying 53% above the EU average for their electricity. Irish consumers pay more because of the way in which energy is produced in Ireland.

The roots of this specifically Irish problem lie in the move to privatise energy production and treat it as a market for profit, rather than a natural monopoly to be run for public value or public good.

In the 1990s the EU sought to break up state-run energy companies across Europe, including as the ESB and Bord Gáis. In 1996 and 1998, the European Union introduced Electricity and Gas Directives, forcing member states to open their energy systems up to investors and sell off power plants and infrastructure to private capitalists.

Fianna Fáil did not seek an Irish derogation for this directive, even though the small size of the Irish market would exacerbate the worst effects of privatisation.

In 1999, Fianna Fail introduced the Electricity Regulation Bill which opened the market to competition. Two years later, they removed the ‘not for profit’ mandate of the ESB. Public companies that formerly operated on a not-for-profit basis are now forced into a market, requiring them to behave instead like private capitalists by seeking higher rates of profit.

Between 1986 and 2002, there were no price increases because the ESB did not operate on a for profit basis.. But these moves to privatisation alongside a failure to transition to renewable sources of energy have since led to price hikes for domestic consumers and black outs have started to occur in parts of Dublin. Here are the reasons why:

The government proposal to give energy companies €100 per consumer to cut energy bills is too little and too late.  Companies will pocket this subsidy while pushing up prices.