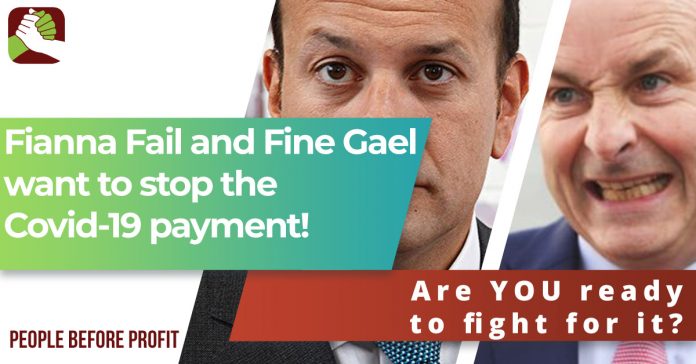 Fianna Fáil and Fine Gael are getting ready to cut the €350 payment. Their tactic is simple – pick an exceptional case and say we cannot subsidise people who don’t need it.

‘What about the student who worked part time and is now back at home with their rich parents’ house’ scream the media mouthpieces of the establishment.

They don’t say that tens of thousands of precarious workers are not getting the €350 payment because they were not working on a specific date.

The bosses want to cut the €350 payment to conscript people back into an ultra-low pay economy. The Supermacs owner, Pat McDonagh, gave the game away when he said, ‘Why would part-timers come back to work for €200, when they can get €350.’ He also said that the Covid-19 payment was ‘like winning the lotto’ for some people.

We are organising to keep the payment – and we are starting now.

ARE YOU WILLING TO FIGHT FOR IT? WILL YOU HELP THE CAMPAIGN?

It will take ONE minute to do TWO things to join the fight.

2- Join us in the fight by filling in the form. All information provided is in strict confidence and complies with GDPR.

Why is this important?

The Pandemic Universal Payment of €350 per week for all those who lost their income as a result of the Covid19 crisis was a welcome move by the caretaker government and an admission that the current social welfare rates and their previously proposed €203 payment were wholly inadequate.

Currently the payment is set to run until 19 June. The payment needs to stay in place until the end of the current health emergency and until the full recovery of employment lost as a result of the pandemic. Any attempt to “taper off” the payment, as recently suggested by Minister Paschal Donohoe, may result in people being pushed back into a workplace before it is safe and financially punish them for a loss of income that was completely out of their control.

The current payment does not cover all those who lost income as a result of the crisis. Many of those who work in the gig economy or in precarious employment were deemed ineligible because they were not working on or after 6 March. Both Over 66s and Under 18s who were working prior to the crisis were also deemed ineligible. The payment should be expanded to include these workers.The rate of €350 is an unofficial admission by the caretaker government that the current social welfare rates are wholly inadequate and rates for all social welfare payments including those on state pensions, disability and job seeker payments should now be increased to €350 per week. These measures should be taken as a first step towards creating a Universal Basic Minimum Payment to eradicate poverty in Irish society.