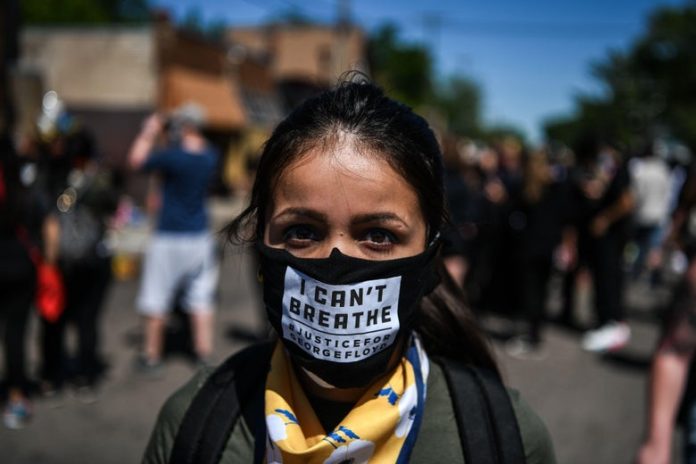 America is experiencing its biggest uprising since 1968 – the year Martin Luther King was assassinated.  Despite the threats of more shootings, tens of thousands have joined in protests in scores of cities.  The racist bully, Donald Trump, was forced to go into a  White House bunker as hundreds gathered outside his residence.

The uprising is being fueled by two  causes which are now intertwining.

The first is the open racism of US police forces. The public lynching of George Floyd, who was murdered in broad day light as he shouted ‘I can’t breathe’, has brought home the reality of that racism. Black people are nearly four times as likely to be killed by police officer as white people.

This arises because there is a  deep structural racism  at the heart of US society that stretches back to the era of slavery. Even after the slave owning states of the Southern confederacy were defeated in a civil war, their ruling class came back by using open terror. They resorted to lynchings and the Ku Klux Klan to drive black people back into a subordinate position. The poison of that racism has spread throughout US society and is typified by the remarks of Trump.

The second cause of the anger is the death of 100,000 people from Covid-19. Trump’s insanity in telling people to drink bleach symbolises the total ineptitude of the US state. The wealthist country in the world could not mobilise its resources to protect the poor, because it cares far more about profit. As a result, black people and poor people have been disproportionately affected by Covid-19.

In order to stop the uprising, Trump has taken to denouncing the radical left and Antifa as terrorists. But the real terrorists are racist police officers with guns who seek to intimidate and promote white supremacy.

Nor should anybody be taken in by the constant media focus on ‘looting’. The reality is that tens of thousands are taking part in peaceful demonstration and looting arises because there is deep inequality and poverty in the US.

The only reason why a white police officer has been charged – albeit with third degree murder- has been because militant action led to the burning of police stations. The US ruling class are frightened -and they need to be.

People Before Profit in Ireland  extends its full solidarity to the US protestors and the Black Lives Matter movement.

We want to build a world that is cleansed of racism, Trumpism and white supremacy.

In the meantime, please join the many protest that are being organised rapidly: