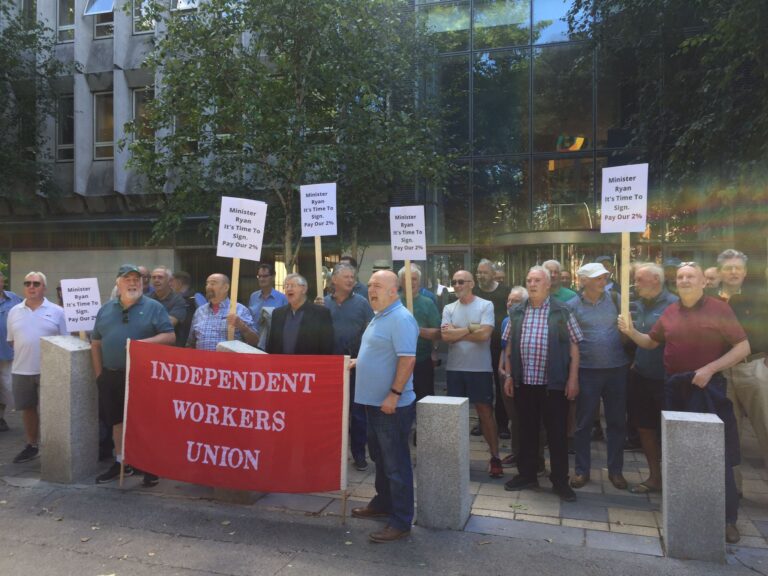 On Wednesday 3 August at lunch time 50-60 mostly retired workers from An Post gathered to protest Green Party leader Eamon Ryan’s continued resistance to signing the 2% increase on their workers’ pensions which are paid through the Department of the Environment, Climate and Communications where Eamon Ryan works as minister.

Bernard Clarke an An Post staff representative with the Independent Workers Union, the union which organised the protest for pensioners from An Post, explained:
We’re here today because the minister failed to sign off on a 2% pay increase which was agreed with An Post earlier on this year to be back dated to January. The minister is sitting there with the agreement on his desk… In the meantime, staff in An Post have received their 2.5% and back money since June.

NO REPRESENTATION FOR RETIRED WORKERS

Derek Keenan who helped organise the protest said, ‘We’ll be back next week on Wednesday again at the same time, 1 o’clock. Come down. Support these workers who have given tremendous public service over the years. It’s a shame that they are being forced into this but it serves as a lesson as to what happens when retired workers lose representation.’

People Before Profit’s Bríd Smith brought a Provisions in Respect of Pension Entitlements of Retired Workers bill on this topic in 2021. Workers retired staff associations have little to no real power over how their pensions are administered even when deals have been struck. Keenan noted that currently in many many cases workers pension rights can be used as bargaining chips Workplace Relations Commission negotiating tables. The An Post Retired Workers provides a stark lesson.

A WARNING ON WORKER PENSIONS
‘The retired workers didn’t get a right to vote on deals made on their pensions. The current staff had a vote but they were told if they didn’t vote for – what was a very unfair – deal, that there would be no pension contributions in the future from the company. No fund.’

Keenan issued a clear warning. ‘Regular pay has gone up by 13% in the past few years but in the same time, because of the dreadful Pension Accord deal at An Post, Pensionable Pay has only gone up 4.5%. The problem is that Pension Accord.’

In the context of the lack of democracy around the administration of their pension, the lack of effective rights vested by law in an accountable retired workers association, the dwindling value of the payments in compared to currently active An Post workers, and the weakening worth of pension payments because Cost of Living Crisis, it’s clear why this seemingly small slight has set off protests.

And they are right to fight. Their story presents a warning but also an example of how workers can unite and fight in solidarity to draw attention to how business and government are failing vulnerable working people on a regular basis.

We stand with the workers in their demands that Eamon Ryan sign off on the agreement today.

An Post Retired Workers are protesting again at 1pm on Wednesday 10 August 2022 at the Department of the Environment, Climate and Communications on Adelaide Road.