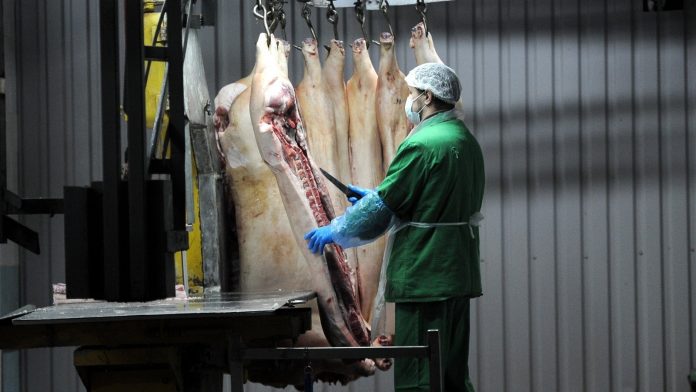 The government have known for months that there was a danger of Covid-19 spreading in meat plants but did not act. People of Kildare, Laois and Offaly are paying the price with another lock down.

The first case came to the attention of the meat plants on 17 March but safety protocols were not introduced to meat plants until 19 May. That was two months in which there was a spike in the outbreak of coronavirus in the meat plants.

In early April. Richard Boyd Barrett TD sent an e-mail to the then Minister for Health reporting a suspected outbreak of Covid-19 at a Cavan factory. Three weeks later there was no news of the investigation which the Minister said was ‘urgent’.

On 30th April, the then Minister for Agriculture Michael Creed was asked about cases of Covid 19 in the Dail. He said ‘Our primary concern was to make sure that as we approach peak production, we keep processing capacity functioning’. He claimed that unsafe practices were not taking place when Paul Murphy TD pointed to examples. He said this was a smear tactic.

On 20th May, Paul Murphy pointed out that there had been 200 complaints about conditions in meat plants – but the Health and Safety Authority had not inspected the workplaces concerned.

On 21st May, Brid Smith TD pointed to a study in the US where those living within 15 miles radius of a meat plant were twice as likely to contract Covid-19. But again, nothing was done.

On July 9th, the British Medical Journal ran an article about the international crisis in meat plants. They produced a set of guidelines to keep workers safe. These included:

These measures were not imposed in Ireland – and this is why more than 1,000 meat plant workers have contacted Covid 19.

The meat barons are a powerful lobby and are key players in Irish capitalism. Instead of imposing regulations on business, the right-wing parties of Fianna Fail and Fine Gael prefer to issue voluntary protocols.

The Irish government is fully aware of the terrible conditions of workers but they have turned a blind eye.

Many workers are employed by sub-contracting firms and have no sick pay schemes. Some of the payments are even routed through Poland- so that the workers do not even accumulate stamps to claim illness benefit.

In the aftermath of a meat plant scandal in Germany, a special law was introduced to ban sub-contracting and enforce direct employment. But nothing like this is occurring in Ireland where there is a crude philosophy, that profit comes before workers’ health.

Covid-19 shows it is time for change.  All meat plants should be closed for two weeks to ensure that they are Covid free. Workers should be put on full pay while this emergency last. We need to move to a system of public ownership of meat plants because the existing owners have shown a reckless attitude to human health.

IF you are a meat plant worker or know someone who is, get in touch with People Before Profit. Text us on 087 283 9964 or e mail [email protected]