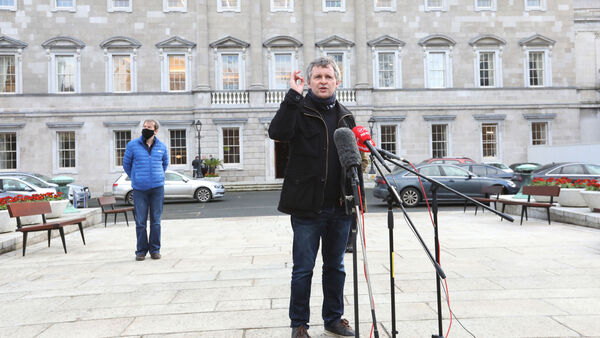 In a statement this afternoon, Richard Boyd Barrett TD said he will be outlining People Before Profit’s complete opposition to the government’s Land Development Agency Bill which will be debated in the Dáil this afternoon and tomorrow.

Richard Boyd Barrett TD said today that the passing of this Bill would herald the “wholesale pillaging” of the public land banks by “profit hungry developers and investors.”

The Bill will allow for the new agency to take over public land from local authorities and all other public bodies in the state – land that should be used wholly for social and genuinely affordable housing, and instead develop 50 per cent or more of each site for private housing, with no minimum percentage requirement for affordable housing or social housing.

Hundreds of previously publicly owned sites will all be parceled up as Designated Activity Companies (DAC’s), allowed to enter into arrangements with “investment vehicles” and “third parties.” The DAC’s will not be subject to any democratic oversight, will not be subject to Freedom of Information (FOI) and certainly will be insulated from detailed scrutiny by “commercial sensitivity” provisions.

The Bill explicitly links the undefined proportion of “affordable” housing on each site to market prices and conditions, guaranteeing that the housing will remain completely unaffordable for those on low and middle incomes in many parts of the country, particularly those areas where the housing crisis is most severe.

The Bill allows the LDA to dispose of lands without any democratic input and to take over the currently democratic local authority function of drafting planning schemes.

The Bill instead refers to “cost rental” provision but again states explicitly that rents, alongside house prices on the sites, will be linked to market conditions with “different prices ….. relating to different geographical or administrative areas.”

The only hope of social housing offered in the Bill on LDA on sites will be through Part V, (10% obligation) which currently applies to private developments but even this obligation can be avoided by the developer paying a sum to the council in lieu.

This Bill is the state effectively abandoning traditional council housing and washing its hands of any responsibility for the delivery of housing that is accessible and affordable both to those on the housing list and those that cannot afford their own home at market prices.

“This legislation will actively facilitate a heist of huge swathes of the public land bank – another NAMA just waiting to happen. It is quite clearly the government giving carte blanche to developers and property investors to pillage the state’s land banks while pretending to facilitate the provision of housing for the public good.

“Shockingly, the Bill puts no requirement at all for social housing on these public lands, as the LDA will be able to buy out even the Part V requirement.

“In the course of the debate we will be outlining our complete opposition to this Bill which represents a land grab by the private sector of state lands which should be used for genuine council housing and affordable housing delivered by the state.”

Another NAMA Scandal waiting to happen People Before Profit have said that the Land Development Agency (LDA) Bill, commencing second stage in the Dáil tomorrow,

People Before Profit cllr Adrienne Wallace is leading the call for a revamp of Carlow council’s social housing allocation policy. She said it is time