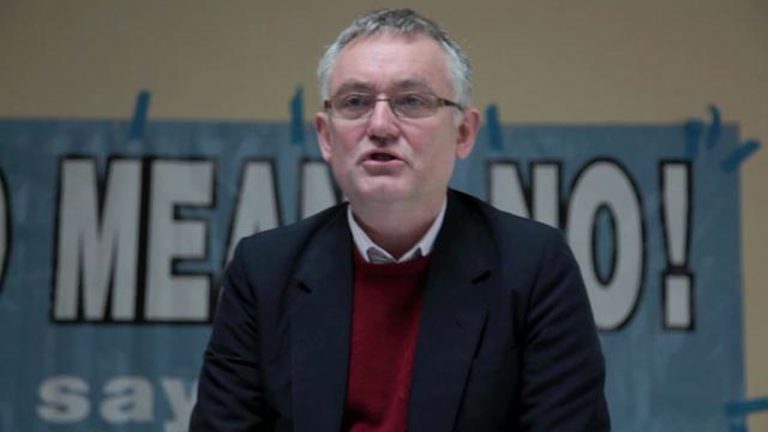 Sinn Féin invited a number of parties to attend a conference on an ‘Agreed Ireland’ at the Waterfont in Belfast last weekend. People Before Profit sent along Kieran Allen as its representative. Here is a prepared speech he wrote for the event.

People Before Profit is a 32 county organisation. As socialists we oppose the partition of Ireland.

Why? Because it was imposed on Ireland by British imperialism in order to stunt and crush a revolutionary movement that engulfed Ireland between 1916-1923.

Because it also led to two failed states:

James Connolly said that partition would bring a ‘carnival of reaction’ where rival Green and Orange bigots wave their flags to bolster their lives of privilege. He was absolutely correct.

It is because we are against partition that we totally oppose a ‘hard border’ between the North and South of this country. Now of course every political party – even the DUP – say they are against a hard border.

People Before Profit, however, have also outlined concrete steps to prevent it.

Now let’s return to the question: Can a referendum on Irish unity be successful? Let’s start with some positive reasons to say yes.

We are living in an age of great instability. More specifically, British imperialism is riven with conflict. Brexit started out as a game among public school boys about how best to whip up chauvinism and racism but it has ended up causing serious difficulties for British capitalism. Over the next period, it is possible to imagine the break-up of the UK.

But instability in Britain will not, in itself, create the conditions for Irish unity. It also depends on the strategy being pursued by those who wish to see unity. In this regard, I want to challenge two aspects of the current Sinn Féin strategy and advocate a positive alternative.

The first is, why is the question of Irish unity being tied to support for the EU? I am not trying to rerun a debate here. But let’s put it like this?  56% of the electorate in the North voted to remain in EU but that does not mean that this majority will be so anxious to remain, that they will vote for a united Ireland.

Do you really think that the upper professionals who live on Antrim’s gold coast are so enthusiastic about the Brussels bureaucracy that they will vote to be ruled by Dáil Éireann?

And let’s also get real about the EU. It is a bosses club that locks into its very structures a default option of privatisation and neoliberalism.

Let me give you an example. The European Central Bank forced the Irish people to bail out banks to the tune of €64 billion. Now one of those banks, Allied Irish Bank, is to be partially sold off for €3.5 billion. We are against the sell-off. Note that not one cent of the proceeds can be used to build social housing – because of EU rules.

Northern Ireland has highest number of public sector employees per head of population – twice that of Britain. Within Northern Ireland, West Belfast has a higher proportion again. Yet EU rules prevent state investment that ‘distorts’ the market.

The EU is an undemocratic institution. MEPs cannot even propose laws without the say so of the unelected EU Commission.

People Before Profit are absolutely against a Tory Brexit that hooks us all up with Donald Trump and fantasises about recreating an empire built on tax dodging and bargain basement wages.

But the position of People Before Profit is also: neither London nor Brussels but a socialist Ireland.

This is the second question I want to raise:  Is Irish unity to be established though harmonising arrangements between the current Irish states or through a revolutionary challenge to both. Some advocates for Irish unity, including Sinn Féin spokespersons, use a piece of research undertaken by a Canadian academic, Karl Hubner, entitled Modelling Irish Unification. This purports to provide an economic case for unity.

One of Hubner’s main arguments is that if the North adopts a similar tax code to the South, it will attract more Foreign Direct Investment.

Unfortunately, Sinn Féin has gone along with this by endorsing a policy of cutting the rate of corporation tax in North to 12.5%.

It indicates that you want to extend the Southern tax haven to the North. But let’s spell out what that means.

If the rich and the corporate elite are not forced to cough up more in taxes, there is less money for public services. There are longer waits in hospitals, higher student fees, more people on housing lists. That is not a vision that will attract many to a new Ireland.

More broadly, the Southern state is a corrupt state whose primary purpose is to protect the rich.

The reason that Fine Gael and the DUP got on so well on the Cerebrus deal was that both want to sell off property at knock down prices to vulture funds who will jack up rents and evict people – as long as there are kick backs.

The road to Irish unity will not come through SF going into government with FF in the South and DUP in the North with a view to harmonising legal structures.

The Southern state offers no inducement to Protestants whose current loyalty is to queen and country. It has been a sectarian state – where 95% of primary schools are run by the Catholic Church; where the state indemnifies the Catholic Church against compensation for sexual assault to the tune of over €1 billion.

It is a state that can only promise more low wages, more zero hour contracts, more homelessness – and, of course, three year waits for surgeries, that is if you have no private health insurance.

I cannot imagine how a united Ireland is remotely possible without a challenge to the 26 county state that, it should be remembered, did not arise from the 1916 rebellion but rather from a counter-revolution that grew out of  a civil war – ably, I might add, encouraged by British guns and credit supplied to the former IRA leader, Michael Collins.

So lets spell out an alternative. A united Ireland will come about only if we can promise working people a better life – not a perfect utopia, just a better life.

This means advancing a social programme that tackles inequalities in wealth and a failed Irish capitalism that periodically forces its people to emigrate. Jeremy Corbyn was right – we have to re-distribute wealth. We want to see an Ireland where:

Words, of course are cheap – and the real process of change comes from action, from mobilisation of people power.

The recent mobilisation of the Southern population in defeating water charges (although not totally) though mass civil disobedience and good old fashioned boycott – this is the type of mobilisation that should happen to make this programme a reality.

Let me finish with a point made by the great socialist, James Connolly:

But the current Sinn Féin should also heed these words and pull back from an embrace of low taxes for corporations and frame its moves to a united Ireland differently.