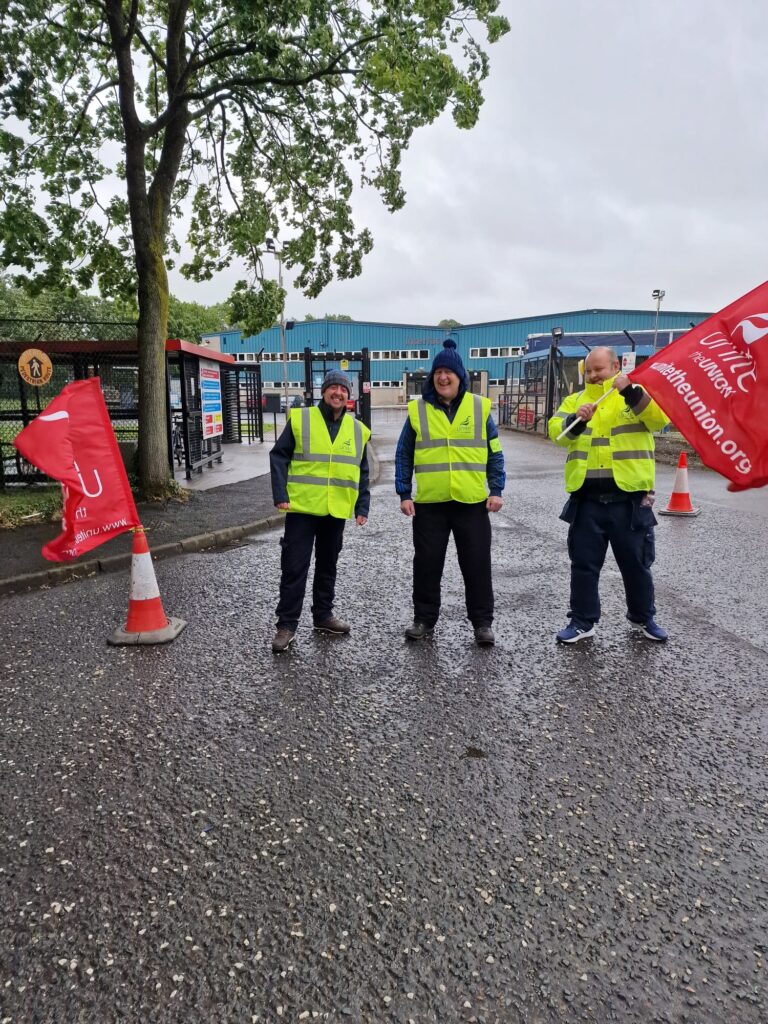 People Before Profit spoke to the trade unionists behind the all-out Interface strike in Craigavon which won an inflation-beating pay increase in early July: 15.25%.

There are about 150 workers in the factory in Craigavon, 94 of which went out on strike. This was the overwhelming majority of the production floor staff. Mostly these were local men in their 40s and 50s who had never been on strike at the company in its 40 year history.

The picket support gazebo went up on Sunday 26 June just as the sun went down. After week of pickets, the united workforce were looking over their new pay offer of 15.25%. There are lessons to be learned from failures but also from overwhelming successes like this one.

The Interface strike had three features that put the workers’ pay claim over the edge: a fighting union, strong support, and careful workplace organisation.

A fighting union to organise in

Interface is an international manufacturer specialising in flooring, like carpet tiles. Atlanta is the Interface global HQ and their European head office is in the Netherlands. The facility in Craigavon is the only production facility remaining in the UK or Ireland.  The company recognises Unite as their workers’ union.

To face off against a big corporate structure, it can help to have a big union. Unite is big. But Unite is also a decidedly fighting union, especially since last summer’s election of Sharon Graham. She’s Unite’s former head of organising and the first female leader of the second largest union in Ireland and the UK. She promised to ‘get back to the workplace’ and she has been fairly constant in her support of fighting workers in a fighting union, and that means being willing to put the pressure on.

How much did the strike cost Interface? ‘At least a million’ estimates Interface worker and Unite’s elected Craigavon Branch Secretary Dwyer McKerr. ‘The sustainable company face was lost during the strike,’ he added. The pickets he helped organise were ‘boisterous, but civil- with lots of music to keep things going’. He said other workers who work nearby approached the picket to find out how to join Unite. Workers who are outside of unions want a union who will fight on their side with them.

So the strike was a success because more workers at Interface agency staff and non-production staff joined Unite. But the strike also helped grow their union beyond their workplace, because workers from nearby facilities visited the pickets, wanted be a part of a fight back, and learn how Unite could help them.

The Interface strike is connected to something bigger locally too. Less than a 15-minute drive from Interface, in November 2021, workers at Glen Dimplex facility in Portadown went on strike and won. Both were represented by the same union: Unite, but specifically the local Craigavon branch. Unite is building reputation for winning through the Craigavon Branch. That’s due to being a part of a big fighting union, but also constantly cultivating organizing inside the workplace and cultivating links around around the workplace for the support you need when the fightback starts.

Strong support in the community

People in the local community supported them, visiting and bringing food platters or opening their doors for whatever was needed.

Much of what was needed to run the picket successfully with the ability to go the distance was learned from the recent experience of the strikers fellow Unite Branch members on the Glen Dimplex strike. Other ideas and resources came from the many strikes Unite’s visiting staffers brought.

He talked about how workers who might not have known each other because they were generally on opposite shifts were together on the picket and learning for the first time the power they had together when they united as workers with good self-organisation.

Good organisation on the ground

Union density in the private sector in the north is higher than anywhere else in the Britain or Ireland. But simple ratios of members to non-members in your workplace won’t get you out on the picket to get you your chance to win. But McKerr reminds us that ‘high density of union membership in the work force is fundamental. It brings what you need: good workplace organisation and on-the-ground knowledge of the people and the issues.’

There was no shortcut to success for these workers. They consistently built their workplace organization and nurtured the support they needed to win what they deserved for themselves and their fellow workers. This doesn’t happen overnight. They built up links and good relations long before the strike and maintained them throughout.  Instead of looking to stoke up conflict with them, strikers chose to actively engage with agency workers inside the facility in constructive friendly ways. Some agency workers privately joined the union because of the strike. This gave the strikers eyes and ears on the factory floor and built the numbers of Unite members.

One of the major company decisions which led to the workers decision to finally strike after decades was the move away from local-based personnel management and HR when the company restructured. ‘The company stopped listening and being responsive to workers,’ Dwyer said. As the workers took the reins during the strike, they were not going to make the same mistake. They resolved to keep open communications going with everyone involved.

As one of the lead stewards for over 20 years, McKerr has done his bit to keep union membership inclusive on the production floor.  In helping plan the strike, he kept the composition of the committee in mind. It had to be representative to be responsive. It had to be deep and wide and keeping the new task of running the picket feasible. Despite the overwhelmingly ‘long-term and local’ workforce, migrant, newer and younger workers are welcomed in the union and valued on the pickets.

…which led to good organisation on the pickets.

McKerr helped build a separate 6-person subcommittee to run every aspect of the picket. This allowed people allowed the reps’ committee to focus on planning for negotiations and liaising with the office, without getting swamped with new tasks and the issues which come when looking after 100 people on pickets. It meant no one got overwhelmed and equal representation was allowed from each of the three shifts.  This was needed. These folks didn’t usually work together and often only knew little more about each other than a name or face.

Going out on strike itself is unfamiliar. How do you to manage life at home without pay? There could have been a danger that workers from different shifts could have factionalised around minor differences like picket line management or strike pay. Instead the committee anticipated and planned for these issues. McKerr said, ‘Shifts 100% united through it.’ The strike committee arranged for strike pay to available early if where needed and communicated early and often that you had to be on the pickets (not on a picnic) to get strike pay. They made sure that each striker had representation from people who worked on their shift with them on the picket committee.

This meant first-time strikers felt safe. So the pickets were ‘civil, but boisterous’. Communications were frequent. Coordination was strong. They had good advice from Unite and the activists in the Craigavon branch committee. They maintained and built up strong support from the community and family- as well as latent support from agency staff , office staff and workers from facilities in the same business park. ‘We actually gained 31 new members for Unite in the week’ Dwyer boasted.

This is one of the largest pay wins in Ireland since inflation began rising to its historic 21st century high of 9.6%. Workers said this deal corrected years of pay suppression and historic pay injustices.

Was it all up? No, some of it was lateral: the deal reclassifies a 5% of the pay away from a ‘tax-free’ scheme that had kept that 5% of their pay separate from holiday and sick pay calculations. The deal did win a new 5.25% increase with 2% more for shift allowance (won into the base rate) and £600 ‘time and attendance’ (also won over into the base rate) to add up to 10.25% this year. Add that to the 5% recovered from the ‘tax-free’ amount and you get 15.25%.

2% increase to shift allowance eventually added to the base rate

£600 ‘time and attendance’ allowance also incorporated to the base rate

5% reclassified as pay from tax-free scheme

The recent WRC deal in the south which management got Ianród Éireann’s staff to sign was worth more at 15.9%, but it won’t actually get to that 15.9% until 2026. The deal also hopes to lock their group of unions into its four-year ‘no-strike’ clause. The intention is to nominally prevent any workers from mounting a fightback à la Mick Lynch.
Unite’s Interface workers secured the whole 15.25% increase deal starting right now in 2022.

This strike set an example of self-organisation. From 87% balloting to strike and 95% voting yes, to overturning historic pay injustices and wage suppression for a 15.2% increase to base pay the workers in Interface showed how to unite and fight and win.

The July win at Interface builds on the November win at Glen Dimplex. These wins show why we need fighting trade unions in our workplaces, how supporters in the communities can help, and how good organisation is ultimately what wins the strikes that win for workers.