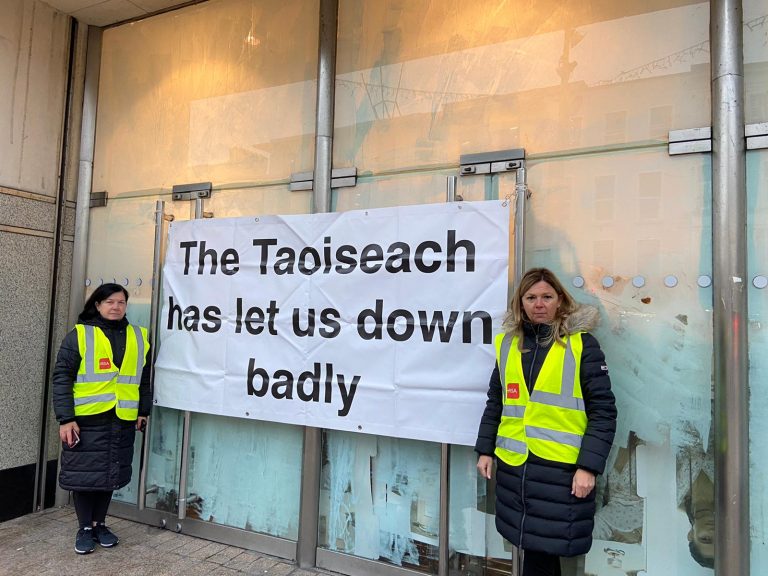 The Debenhams workers have been a shining light in a terrible year. They have waged a brilliant struggle against a heartless corporation, a ruthless liquidator, and a government who clearly puts the needs and interests of employers before workers’ rights.

In the context of Covid-19 the government has pumped billions into subsidising employers, some of whom remain very profitable, but has refused to acknowledge that the Debenhams workers were a victim of Covid-19 and should have emergency funding to fund the payment of their collective redundancy rights. The strikers have highlighted the plight of workers made redundant during liquidations. Real pressure is on now to bring in legislation that will protect them.

After huge pressure the government appointed a mediator to the dispute. He produced his proposals this the week before Christmas. He made no recommendation for additional redundancy payments. Instead proposed a €3m fund to “support career guidance/ training/ education/ business start-ups”.

Eddie Conlon spoke to three workers, Suzanne, Pauline, and Anne-Marie, on the Henry Street picket about the deal on Saturday.

They are “insulted”.  Anne-Marie says the deal is “shocking” and takes a completely patronising approach to them as shop workers. They say they have lots of “expertise and skill”. Pauline says she is already doing a computer course and asked why would she need this fund as there are many courses available to her already. Many of the workers have engaged in training courses. Others are near retirement and “will get nothing from this”.

“Imagine”, they said, “telling us to set up businesses when all around us businesses are collapsing due to Covid-19”. The workers were enraged that Micheál Martin tried to suggest that they were looking for what the banks got.  He is now claiming the banks weren’t bailed out and at the same time saying the Debenhams workers statutory redundancy is costing the state €13m.

Suzanne said “I have paid taxes for 24 years. I pay PRSI into the social fund which will cover this €13m. Anyway the state is the main preferential creditor of Debenhams. The state is owed €18m which includes the €13m. The €13m is recoverable in a liquidation. What is he on about? The banks got €64 billion! The state needs to step aside and mandate KPMG to pay us. Our 2 + 2 would cost about €10 m, but we have made it clear we would examine any reasonable offer”.

The mediator’s report clearly says that the state will not mandate the liquidator to make any financial contribution to the resolution of this dispute.

The strikers say they will be voting NO. Pauline says they can “stuff it”. Anne-Marie says the “stock should have been used to sort us out. We believed the talks would lead to this”.

There is no doubt that this issue was the initial focus of the talks. In September the workers were offered €1m from the stock. Now nothing is being offered. The workers says “there is little chance of this being accepted”.

People Before Profit remains fully behind the Debenhams workers. With some exceptions, they have been completely betrayed and let down by the wider trade union movement. Mandate has not done nearly enough. A letter from the workers to the ICTU Executive in October was effectively ignored.

We have argued all through the dispute that the wider movement needed to be mobilised behind the workers. This has taken an added urgency with further mass redundancies coming in retail.

On December 11, Mandate demanded TDs institute a “contingency fund that ensures any collective redundancy agreement terms are met in full”. While coming a bit late in the Debenhams dispute, this demand should be a focus for a wider mobilisation. This mobilisation for a contingency fund should include the demands to 1) pay the Debenhams workers and 2) bring in legislation as a matter of urgency for the future.

In August I said that we should build for a huge mobilisation. The mobilisation should take the huge 2005 march to support the Irish Ferries workers as a model: “Then, workers were asked to take a half day off work to support a work time march. The strikers should demand that ICTU support this. While there are significant concerns about Covid-19 at the moment it is possible to organise a safe social distanced demonstration as long as we start planning for it now.”

This remains valid now as it did then. While the mood amongst the workers is a combination of “despondency” and “anger” they clearly take the view that this offer is not worth the paper is written on.

Carroll: “Executive Would Be A Laughing Stock If The Situation Weren’t So Grievously Serious”

Covid: This Government Has Made A Right Mess

In March 2020, Leo Varadkar gave a Saint Patrick’s Day address on the dangers of Covid and called for solidarity in the face of the

In Dublin yesterday Debenhams workers launched ‘Tales from the Debenhams Picket Line’ Our members attended and elected representatives were presented with copies of the book. The fight against the bosses and the state goes on whenever we tell the story of this massive 406-day fight.