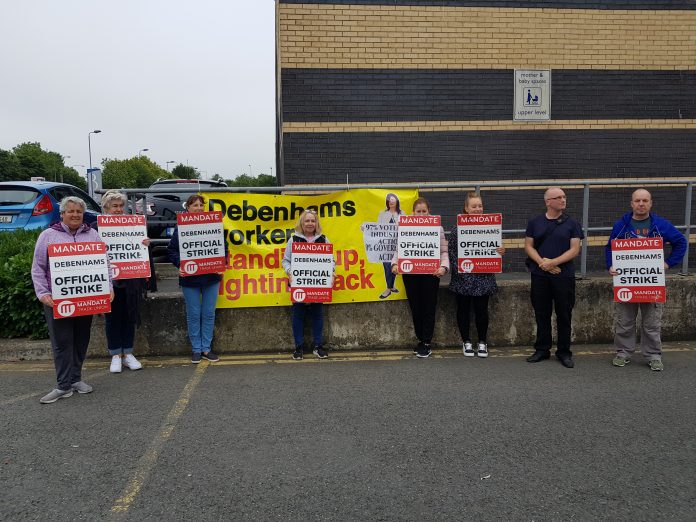 The Debenhams dispute continues. Eddie Conlon sets out what needs to be done to win.

Spirits are high on the Debenhams pickets. PBP members have been on picket lines this week where the workers are still feeling positive after their great rally last Saturday. They remain determined to fight for a just settlement to their dispute and stop all stock leaving the stores.

Unfortunately, their determination is not match by their union leaders who refused to back the rally and are now sowing defeatism. In an interview on radio today the new incoming General Secretary of MANDATE said the workers have “Little chance of them securing more than their statutory entitlements”.

This is despite the fact that the liquidators have made it clear that if instructed he can use the monies owed to the state to sort out the workers. The reality is not enough political pressure has been put on the government. And not just by MANDATE. Throughout the dispute the ICTU has remained silent. It has not issued one statement in support of the workers. The campaign has been lead from the ground with the workers and their shop stewards taking the lead in sustaining the pickets and applying pressure on the establishment.

This dispute has dragged on now for too long. The workers have been left waiting too long for justice. Its time now time to double our efforts and apply intense pressure on the government parties to deliver a settlement.

This requires in the first instance that a mass meeting of workers be organised to refocus the fight, draw in those who may have fallen away and to send a clear message to the union leadership that the workers are not giving up. It is quite incredible that up to this point MANDATE has not organised a mass meeting to report back to workers on developments and progress (or lack of it) in negotiations. The shop stewards should be part of the negotiations.

Along with this open support groups involving all those who have supported the workers must be established in each locality. Their work should be coordinated across the country.

Other members of MANDATE must be drawn into the dispute with delegations of strikers going to all the major shops to meet with shop stewards and call on them to join the picket and raise funds to support the campaign.

The strikers should demand an immediate meeting with Patricia King, ICTU General Secretary.

Pickets should be placed on the headquarters of all the government parties and the Bank of Ireland.

All workers must be called on to join the pickets. A general call must go out for workers to join the roster and sustain the 24 hour pickets. As long as the stock remains in the shops the workers will still hold a trump card.

As more and more retail redundancies are announced this dispute takes on greater significance. A victory for the Debenhams workers will provide all workers with the confidence to fightback.

Therefore, a huge mobilisation should take place at the end of the month when the holiday season is over. This should take the huge march to support the Irish Ferries workers in 2005 as a model. Then works where asked to take a half day off work to support a worktime march. The strikers should demand that ICTU support this. While there are significant concerns about Covid 19 at the moment it is possible to organise social distancing and a safe demonstration as long as we start planning for it now.