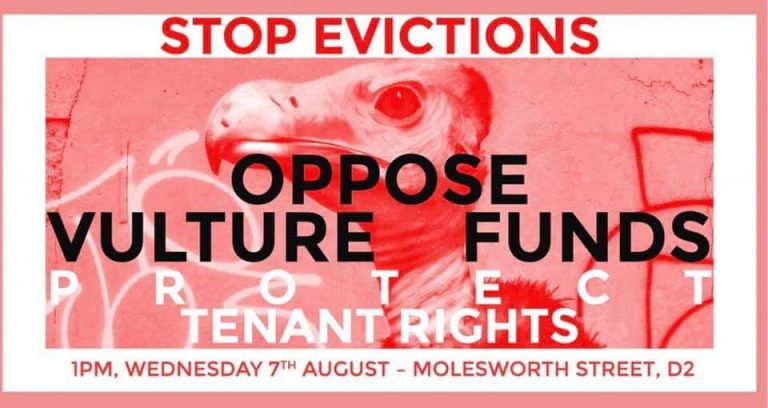 In a statement this morning, People Before Profit announced that there will be a protest tomorrow outtside head office of vulture fund, Val Issuer Dac, against the mass eviction of tenants in Portobello.
People Before Profit rep, Siomha ní Aonghusa, is working with the tenants and the Dublin Renters Union to protect the over 50 tenancies at Sth Richmond Street and Rosedale Terrace that are threatened with eviction.

Siomha ní Aonghusa said: “32 Molesworth St looks like any other building, but its where Vulture fund Val Issuer Dac conducts its business. These days, that business involves evicting over 50 families(including a newborn baby and children with disabilities) from their homes.

In November 2018, the tenants of Sth Richmond Street and Rosedale Terrace received letters from Ronan Mc Cormack of Belgrave Property Management company, saying that their apartment buildings had been sold, to vulture fund Val Issuer Dac.
A few months later, they received eviction notices.
These are 50 families, mostly migrants, most of whom who have been living there for years, and do not want to leave their homes. They say the landlord is using ”renovation” as an excuse to jack up the rents, and furthermore, does not have the court order required to legally evict them.
There is video footage of the tenants beeing harassed and intimidated by Ronan Mc Cormack’s property management company acting on behalf of the vulture fund.
The tenants have reached out to the Dublin Renters Union and People Before Profit and formed a tenants action group to resist the eviction. They have already held several protests. This Wedensday, August 7th, they have organised a protest at 1pm outside the vulture company head office, at 32 Molesworth Street.