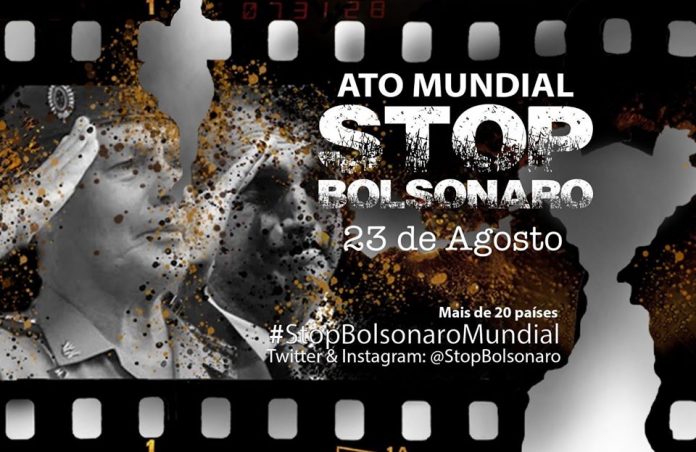 Brazilians all over the world, unite! Let’s Stop Bolsonaro!

The Brazilian President, Jair Bolsonaro, is a combination of fascism, homophobia, prejudice, bullets, and genocide. Since Bolsonaro’s election in 2018, Brazil has been ruled by a terrible regime, represented by bullets, bulls and the bible.

His election was a successful result of junk news and a judicial movement against the former president, Lula da Silva. Lula was arrested six months before the general elections. By that time, the beginning of 2018, all opinion polls showed that Lula was the favourite to win the dispute. There was no possible scenario for Lula to lose the election. No other candidate could beat him.

Some people argue that Lula didn’t do as much as he could when he was the president. We have some criticisms about his actions and his politics. But Lula is now repeatedly declaring that he could have a radical left government, compared to his first one. We hope he had his lesson.

The right wing invoked the power of the former federal judge Sergio Moro to send Lula to jail in April 2018. Lula was convicted and arrested, even though there was not enough proof of his crimes. As a prize, Sergio Moro became the Minister of Justice of Bolsonaro.

Bolsonaro’s first year as a president was a complete shame for Brazil. He was never welcomed in any country around the world, and his travels were a disaster. In June 2019, one of the officers of his delegation travelling to the G20 meeting was arrested having 39 kilos of cocaine in Spain.

Traditionally, Brazil does the opening speech for the UN Assembly. Bolsonaro’s speech was nonsense and lies about the Brazilian economy and human rights. He also attacks press freedom.

The year of 2019 will also be remembered as the year when Amazonia was under attack, and farmers were setting fire in the forest.

Education was never so bad for students and workers.

Bolsarano managed to reduce the annual salary readjustment for the minimum wage, after years and years of increases. His family relations to the militia and Marielle’s Franco murder is a scandal. His sons are all involved with some type of crime and problems with justice.

Now, 2020, the pandemic arrives. Brazil quickly became a centre for death and the spread of the disease. On the day we are writing this, over 100,000 people died from the Coronavirus in Brazil.

What is his reaction? None. The president didn’t manage to nominate a Health Minister after he sacked the previous one that was following WHO directions for the disease. “It’s only a cold” is what he said.

Fascism is rising around the world. Ireland cannot be silent, and we must shout together with Brazilians: “Stop Bolsonaro! And stop now!”

Fernanda Otero is a People Before Profit member and journalist, one of the organisers of Stop Bolsonaro