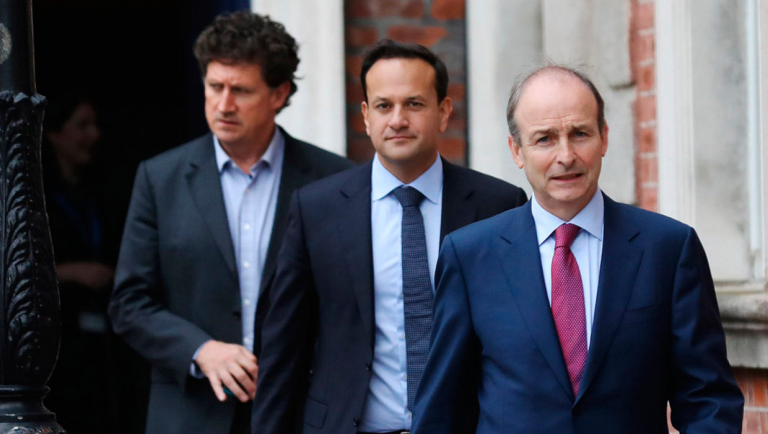 The new restrictions announced by the Fianna Fáil-Fine Gael-Green government yesterday are the culmination of months of shambolic mismanagement and spineless kowtowing to major business interests. As a result of their strategy of “living with” and managing Covid-19 rather than eliminating it, we are now facing the very real possibility of a second wave of the virus.

It is now 8 weeks since the virus was at its lowest ebb after the first wave, with just over 300 active cases in the South. Today that number stands at 2,360 and is likely to rise further in the coming weeks.

How did this happen?

Throughout this pandemic, the issue safety in meat factories and direct provision have been highlighted repeatedly. Meat plant workers have been forced to work in terrible conditions, without sick pay, and often living in cramped housing where workers rotate the use of beds in accordance to their shift in the factory.

Again and again, outbreaks have occurred, and there have been calls for an end to subcontracting, for sick pay, for decent accommodation for workers, for unannounced inspections at plants, and for factories who are putting workers at risk to be closed down.

Yet nothing has been done.

Similarly in direct provision, asylum seekers continue to be forced to share rooms with strangers. There have been scandalous incidents of asylum seekers being bullied into eating in communal spaces even if they feel unsafe, substandard food is served, and in one centre asylum seekers have gone on hunger strike because their water was being rationed to a litre a day. At the beginning of the pandemic, hundreds of doctors signed a letter highlighting the flaws in the government’s response and demanding that asylum seekers be moved to safe accommodation.

Yet still nothing has been done.

Now we are faced with a situation where an estimated 400-500 of 1,250 cases in the last two weeks are either directly or closely related to meat plants or direct provision. These hot spots have put asylum seekers and low paid workers at risk and have created the conditions where Covid-19 has been brought back into the community.

So what has the government done now?

In these two key areas: nothing. Meat plant workers will now be forced to take an uncomfortable test every week, but the conditions for the proliferation of the virus remain the same. Asylum seekers remain in cramped direct provision centres and will not be moved into own-door accommodation.

Instead, the government has attempted to shift their failures onto the general population and appear to be gearing up to grant new police powers that would allow Gardaí to raid houses.

Some of the additional restrictions introduced by the government may at this point be necessary. However, without concrete action on meat plants or direct provision, this government has lost the trust of the public.

Moreover, the new advice is utterly contradictory. No more than 15 people are allowed to gather at outdoor sporting events, yet plans remain in place to bring hundreds of school students into the same building in a few short weeks.

It is also now emerging that despite being 6 months into this pandemic, we still do not have the capacity to turn around test results in 24 hours. Temporary infrastructure that was set up during the first wave of Covid-19 has been dismantled. This is utterly unacceptable.

The public played an exceptional part in suppressing the first wave of Covid-19 by adhering to social distancing guidelines and minimising their contacts. Now, with lockdown fatigue very much set in, government inaction has allowed the disease to spread once again.

We must fight for a strategy that will eliminate Covid-19 for once and for all. This will require:

These measures would move us towards zero Covid and would ensure we could begin clearing the backlog on our hospital waiting lists, but they must be fought for. Workers will need to fight for safe working conditions by joining trade unions and getting organised. We will need to challenge the government through protests on the streets – which must be safe and socially distant.

The reality is that without pressure on the government from below, we are heading for a second wave of Covid-19 which, coupled with the winter flu and the massive waiting lists in our public hospitals, could overwhelm our health services entirely.

Social organising and social distancing are therefore both required in equal measure.

Join the fightback! Get involved with People Before Profit.

How Greed For Profit Is Slowing Vaccine Production

Pfizer has already made a $975 million profit on their vaccine and expect to make $19 billion more in 2021. The world needs Covid-19 vaccines