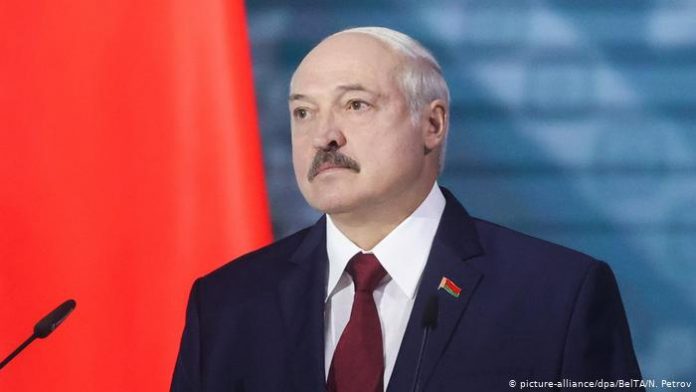 The Belarusian president Aleksander Lukashenko was fighting for the survival of his regime on Monday.

Around 300,000 people turned the capital Minsk into a sea of red and white, the colours of the ­opposition flag, on Sunday. Tens of thousands more joined protests across the country, including in areas that have previously supported Lukashenko.

Lukashenko tried to hold a  a “meeting with the people” at the MZKT heavy goods vehicle company in Minsk. He told workers, ““We held elections, and as long as you don’t kill me, there won’t be any other elections. But as soon he finished, workers chanted, “Go away!”

Outside the capital, there were reports of stoppages at the Belaruskali potash ore mines. And workers at the Navapolatsk refinery, one of the regime’s most important companies, rallied in the morning.

Lukashenko has claimed victory over liberal challenger Sviatlana Tikhanovskaya, with 81 percent of the vote compared to her tally of just 11 percent. Tikhanovskaya fled to Lithuania but has since released a new statement saying she could be an interim leader.

Various Western leaders are posing as supporters of the fight for freedom in Belarus, hypocritically denouncing police violence. French president Emmanuel Macron urged the European Union to support the Belarus protesters. But his own police force regularly attacks demonstrators

The Western powers should keep out of Belarus. The workers can topple the dictatorship and there is no need for an imperialist competition between the EU and Russia.

A genuine alternative to Lukashenko’s authoritarianism is not more free market capitalism.

It lies in the streets and with workers fighting for democracy, social justice and a society where they are in charge.