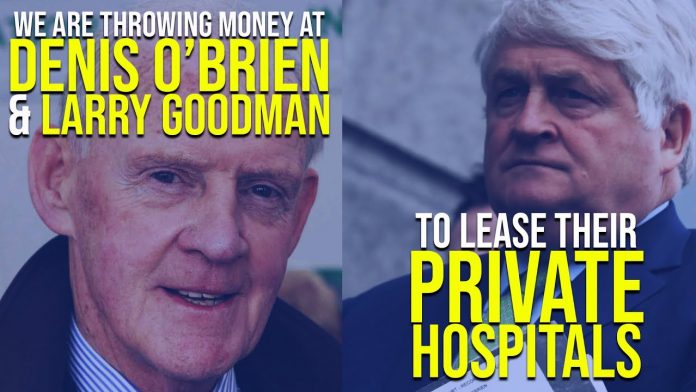 The Irish times have published a profile of each of the private hospital groups that stand to benefit from the secret deal that sees the Irish state paying €115 million per month for the use of private hospitals during the Covid 19 crisis.

How is it that even during a pandemic, we still somehow end up forking out cash to the very last people who need it?

A cursory look at the list of private hospital owners reveal a familiar role call of rich- list regulars and tax dodgers, including Irish billionaires like Larry Goodman and Denis O’Brien, as well as former AIB chief executive Michael Buckley, and former PwC partner Peter Lacy – to name a few.

Larry Goodman is a major investor in three private hospitals, The Blackrock Clinic, Hermitage, and the Galway Clinic.

Blackrock hospital had revenues in 2018 of €123 million, Galway Clinic had  €96 million, and Hermitage Clinic in Lucan had revenues of €74 million.

Others include various global investment companies, and Catholic orders such as the Bon Secours who – despite an incredibly lucrative turnover of €286 million in 2018  – has not been made to pay a penny of compensation for the Tuam babies scandal.

The government has said that their deal with the private hospitals will operate on a not for profit basis. This seems to be a very loose definition of not for profit, because Varadkar’s government is paying roughly 4 times as much per bed as the UK government is paying for their deal on private hospital capacity. Simon Harris might say we “can’t have public versus private in a pandemic”, but this arrangement continues to prop up a deeply unethical two-tier health system, where rich people can become richer by ‘investing’ in healthcare, and profit off people who become ill.

Fine Gael should not be lining the pockets of the profiteers – the private hospitals should be requisitioned without compensation.

Like housing, healthcare is a basic human need. Decent healthcare should not be a commodity, available only to those who can afford to pay into a system that profits a few. Nor should a crisis situation like this result in the further enrichment of the billionaires.

We need to begin building a fully funded, 32 county NHS – and we won’t get there by shoring up the status quo.