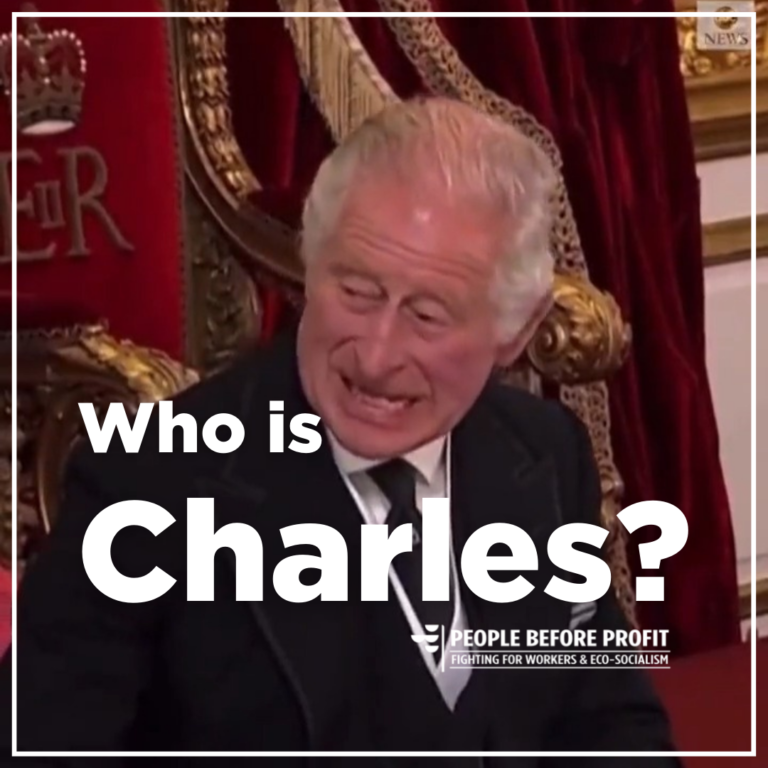 As the establishment in Belfast prepares to welcome and celebrate King Charles today, it’s worth examining who the new monarch really is.

With his succession, Charles inherits an estate worth over £652 million. Unlike everyone else, he won’t pay a penny in inheritance tax because of a law designed to protect the wealth of the Royals. His coronation is likely to cost millions more, at a time when we’re told there is no money for workers forced to strike for fair pay.

Exorbitance isn’t a new phenomenon for Charles who once received millions of pounds in shopping bags for his charity from a Qatari Prime Minister and also chartered a private jet to the tune of £32,000 to watch a screening of James Bond. Despite his pleas for ordinary people to fly less to aid the environment, Charles racked up almost £3million and 150,000 air miles on private jets since 2015.

Indeed, the Monarch is now exempt from being investigated for environmental offences on his recently inherited Balmoral and Sandringham estates and is also granted sweeping immunity from laws protecting workers rights, animal welfare, and more.

These controversial legal loopholes will ban the King’s employees from pursuing sexual and racial discrimination complaints, proving that the Royals are the finest example of one law for the rich and another for the rest of us, especially given the recent scandals which have rocked the family.

Speaking of scandal, the new King has had his fair share. In 2014, he was accused of being used as an arms dealer by the UK government and BAE systems when the day after he joined Saudi princes in a sword dance in Riyadh, the arms company announced the sale of 72 Typhoon fighters sold to the Gulf kingdom.

As the head of the parachute regiment, he has championed the force which took the lives of innocent people in Derry, Ballymurphy, the Shankill Road, not to speak of international atrocities. On a visit to Derry he once responded to a letter supporting families of the Bloody Sunday victims to say that ‘we all need to learn not to hold grudges’ despite justice being denied by the British state.

In the ‘Black Spider Memos’ he was found to have lobbied politicians, including asking former Prime Minister Blair to give more resources to  British soldiers in Iraq, after the lives of many Iraqi innocents had already been taken.

And in 2018 his estate was caught up in the Paradise Papers, which exposed how the rich and powerful stash their wealth offshore.

This list is far from exhaustive but beyond the very basic principled reasons to oppose a monarchy which institutionalises social division, justifies exorbitant wealth, and whitewashes the bloody legacy of colonialism around the world, there is good enough reason to say Charles isn’t worthy of the fawning that politicians and the media in Belfast will be elbowing each other out of the way to partake in.

Working class people from all backgrounds, in Britain and across the North, have nothing in common with Charles, and the entire monarchy he represents. We stand with those people refusing to eulogise him today.