What Now For Football At The Top Level? 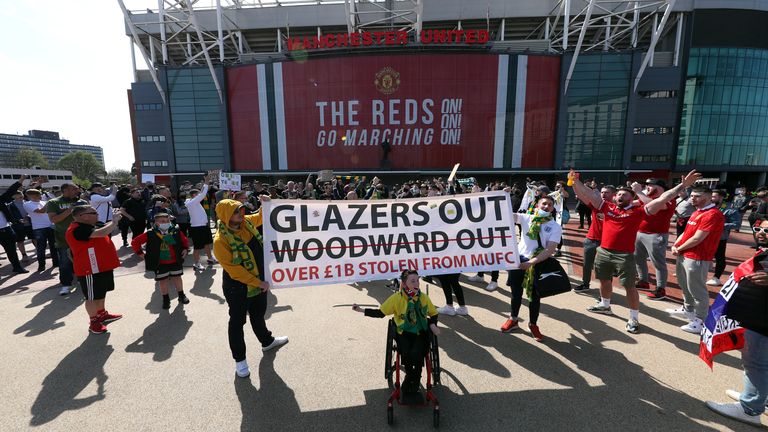 One of the biggest games in world football was due to take place on Sunday May 2nd at Old Trafford between global powerhouses Manchester United and Liverpool. This rivalry between two cities at the heart of northern industrial Britain dates back to the building of the Manchester ship canal in 1893. In more modern times this rivalry is one, not of capitalist supremacy, but of supremacy on the football pitch. This is one of the most passionate games in world football and it is watched by millions.

However, as we now know, this game didn’t take place as planned on Sunday. It was called off due to a large scale protest by aggrieved Manchester United supporters. The well publicised protest was in relation to the ownership of Manchester United. Like many Premier League clubs, they’re owned by foreign billionaires who don’t particularly have an interest in football but have an interest in a global branding, in marketing and in accumulating as much capital as possible.

The Glazer family, American billionaires who own the NFL franchise the Tampa Bay Buccaneers, own Manchester United. They took control of the club in 2005 and immediately saddled the club with £525m in debt. Using a leveraged takeover, an aggressive strategy used regularly in the US, the Glazer’s had burdened the club with the capital they borrowed to fund their takeover.

This was, unsurprisingly, met with a huge amount of anger. Manchester United fans immediately started “Love United, Hate Glazer’s” protests which lasted years. A group of supporters even set up a Phoenix club in the lower leagues of English football, FC United of Manchester, in 2005. In 2010 many supporters ditched their club’s famous red, white black scarves for the original colours of yellow and green. These were colours of the club’s forerunner, Newton Heath, in protest at the clubs owners and a nostalgic look back that their humble beginnings. Protests at games were commonplace, inside and outside the stadium. Boycott’s and walk outs were frequent. While this was ongoing the Glazer’s were still increasing the club’s debt and were extracting millions from the club in the form of “management and administration fees”.

In more recent years these protests became less frequent but the anger and dislike of the Glazer’s is still apparent. The flames of this new wave of protest was fanned by the recent proposal of a European Super League (ESL). A league where 20 of the best clubs in Europe (read most marketable and potentially the most profitable clubs), including United, would join a closed league where prize money would increase for all it’s members without interference from European football’s governing body UEFA. This was met with almost universal anger. Due to supporters pressure and large protests, clubs were forced to backtrack on this proposal within 48 hours of the plans coming to light . As an aside, this proposal may be on hold but it won’t be going away for good.

This leads us on to Sunday’s protest. Sky Sports were due to show this game. They’re owned by media billionaire Rupert Murdoch. Sky are one of the main reasons why the Premier League, which was a breakaway league itself, was set up in the first place and why it’s such a massive global brand. They have pumped billions in to the Premier League since it’s inception in 1992. Obscene money beyond the wildest dreams of founding members. This has changed the landscape of football entirely. Interestingly when supporters were on the streets during the ESL protests just a few weeks ago, Sky were speaking of how “football had been saved”, ad nauseum.

A slightly different tune was presented on Sunday, at least from the Sky presenter Dave Jones and well known Tory and former Rangers and Liverpool player Graeme Souness. It was apparent that the line from Sky is that they’ll support these protests from afar but won’t support it when it affects games they’re showing. Sky did not have broadcasting rights to the new Super League, coincidentally.

Of the numerous demands from protesting United supporters, one of the most prominent (besides a call for the Glazer’s to sell the club) was a call for a 50+1 rule. The 50+1 rule is where a minimum of 50% of the club plus 1 share is owned by supporters. This is based on the German model in the Bundesliga. Outsiders can own as much as 49% of any club but the majority of the club must be owned by the fans through club membership. This membership is kept at a relatively low cost. While this rule can be twisted, just as Red Bull have done with RB Leipzig, for the most part in Germany this has led to a much more democratic running of football clubs. Supporters have a say in the structures of their club.

Membership, as already stated, is affordable. Finances are also more transparent meaning clubs are less likely live beyond their means, thus money is spent on youth development and infrastructure. Ticket prices and travel to away games are much cheaper than in England which leads to a much better terrace culture. This is simply because working class supporters are not priced out of games in Germany. This encourages a better match day atmosphere, something lacking in England since the beginning of the Premier League and all-seater stadiums.

The ownership model in Spain’s La Liga is similar to England. Wealthy individuals tend to owns clubs, with the exception of just four clubs: Real Madrid, Barcelona, Athletic Bilbao and Osasuna. These clubs are entirely members owned. The membership structure differs from Germany slightly. Members get benefits such as priority tickets and votes on club’s Presidential elections but the board of these clubs, particularly in the case of Madrid and Barça, is made up entirely of very rich men and they make decisions, along with a very powerful president, on the running of the club. Fan ownership is very limited at the top end of Spanish football.

In the wake of the ESL debacle British Prime Minister Boris Johnson, a man who has no interest in football, let alone anything related to the interests of the lower classes, has started exploring the introduction of a 50+1 rule for English football. Johnson may not actually care about the sport but he knows this is popular amongst supporters. This would completely revolutionise the game in England.

This shift has not happened in a vacuum. Without supporters protesting en masse the “Big 6” clubs of English football would have joined the ESL and the Tories would not have suggested even exploring the idea of 50+1. After almost 30 years of unashamed corporate greed from clubs in the Premier League; working class supporters, who’ve been marginalised and brushed aside, are finally getting their voices back. They see now that they have the power to change things. After years of disillusionment supporters are energised for a fightback. We know change won’t be handed down on high to us. The powerful forces who rule football, and wider society, will only give concessions when they’re fought for by supporters.

These protests are just the beginning. Once the elite begin to cave in on smaller demands, like safe standing or a cap on tickets prices for example, supporters will grow in confidence. There can sometimes be a snobbery towards football and working class football supporters from leftist and even socialist quarters but it is absolutely vital that socialists are at the forefront of the fight for the heart of football. These are exciting times for the game.