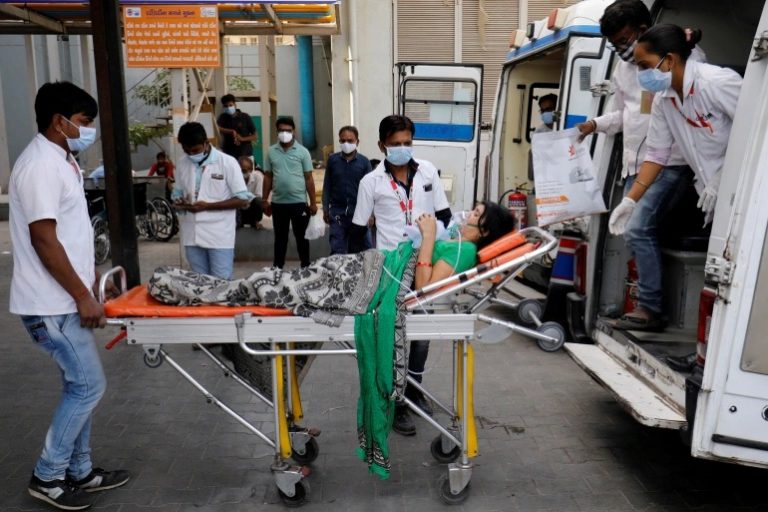 India is experiencing its worst pandemic in one hundred years. Every day, more than 200 people are dying –  according to official figures. Health officials believe this is a gross underestimate and that the daily death rate has crossed 10,000.

On Friday, Delhi’s leading Gangaram Hospital issued an SOS that it only had enough oxygen left for two hours and that 25 patients had already lost their lives in the hospital due to oxygen shortages. Multiple hospitals in India are petitioning the High Courts to seek immediate oxygen supply.

India is run by a Bharatiya Janata Party (BJP) government led by Narendra Modi. Behind this party stands a well organised far-right organisation, the RSS, that has stoked up hatred against the country’s minority Muslim population. Modi belongs to the same club of right-wing politicians like Trump in the USA or Bolsanaro in Brazil.

All of them have played down the threat the virus poses.

In March, when the second wave was already underway, state leaders from the ruling BJP published full-page advertisements in national newspapers telling worshippers it was “clean” and “safe” to attend Hindu festivals. The Uttarakhand chief minister declared on March 20, “nobody will be stopped in the name of COVID-19 as we are sure the faith in God will overcome the fear of the virus.”

In West Bengal, where Modi himself has been campaigning in a regional election, the BJP Chief has advocated drinking cow urine to treat COVID-19

An investigation by an Indian news website revealed that the country’s government waited until October 2020, eight months after the pandemic began, to invite bids for a $27 million contract to place oxygen generation systems inside more than 150 district hospitals. Six months later, most still aren’t up and running.

But while the NJP must bear a huge responsibility so too must Big Pharma and the politicians from the Western World who back them up.

Despite repeated calls from the World Health Organisation, the EU, Canada and the USA has refused to share knowledge and know-how for producing vaccines. They have put the profit motives of companies like Pfizer ahead of public health by refusing to release the patents for making vaccines.

Yet of all countries. India is one of the best equipped to produce vaccines because it has one of the biggest generic pharmaceutical industries.

On the 8th -9th June, the World Trade Organisation will meet yet again to discuss an open patent regime for vaccines so that the world’s poor can have access.

Governments – including the Irish government which is sheltering behind the EU- must come out openly and call for the end of patents for this health emergency.

5 Years Of Activism In Ireland: Resist To Exist

By Fernanda Otero: https://ferrotero.medium.com/5-anos-de-milit%C3%A2ncia-contra-o-golpe-resistir-para-existir-c948a89ef6c This is a true story of an activist based in Ireland. All facts and events are real. It has been 5

Pay Back Time For Workers

Nurses in Northern Ireland have been offered a derisory 1% pay by the Tory government in Westminster. This is an insult to our front line

We Need A State-Owned Bank

The announcement that KBC bank is pulling out Ireland follows that of Ulster Bank. It means the loss of thousands of jobs and destroys the