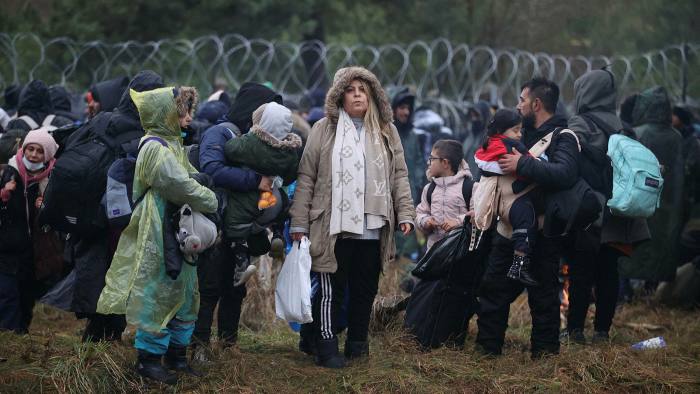 On Wednesday a 14-year-old Kurdish boy froze to death near Kuznica on the Polish Belarus border. He was used as a pawn in an awful propaganda war.

The President of Belarus, Aleksandr Lukashenko, is a dictator who has rigged elections and put down mass protests. He came to power claiming to be a champion of the common person, fighting against corrupt elites. Today he is a brutal thug.

The Prime Minister of Poland, Mateusz Morawiecki, comes from the Law and Justice Party. He also presents himself as the champion of the common person but deflects anger in Polish society against gay people, migrants and abortion. His party talks about how Christian Poland is under attack and so they promote Catholic priests on local radio stations to hammer home their message.

Lukashenko does not want to let refugees stay in Belarus so his police drive them towards the Polish border. Morawicki refuses to let refugees in claiming that Poland is facing a ‘hybrid war’.

A ‘hybrid war’! His reference is to 4,000 starving and freezing human beings who are running from war and persecution. The Kurdish refugees face terrible attacks from the Turkish army. The Yemeni refugees suffer a brutal war launched by Saudi.

But above all, they are human beings – not cyphers to be used in a propaganda war between European Union and Russian allies.

Behind all this lurks a disgusting racism, promoted by both leaders.

The historic equivalent to this carry-on is Hitler’s ploy with Jewish refugees in 1939.

The Nazis allowed 900 Jewish people to board a ship, the St Louis, to leave Germany. At this stage, they were pushing Jews to emigrate. The ship sailed for two weeks to Cuba, because the migrants had purchased visas to enter there. Yet Cuba refused to let them land. The St Louis then sailed to America, but even though they could see the lights of Miami, they were refused permission to land. Hitler had won the propaganda battle.

Today the overall effect of this conflict is to spread the lie that human beings are a burden.

But what of the EU – the upholder of liberal progressive values?

Here is Charles Michel,  president of the EU

‘Poland is facing a serious crisis that we take seriously, and it should enjoy the solidarity and unity of the whole European Union. It is a hybrid attack, a brutal attack, a violent attack and a shameful attack.”

This is the same EU that claims to be in conflict with Poland over its failure to uphold liberal progressive values.