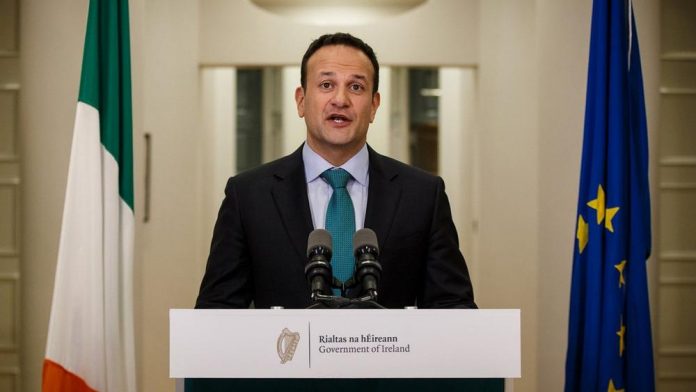 On St Patrick’s night, Leo Varadkar made a well-crafted speech. His spin unit is clearly back in town.

Quite rightly, he noted that solidarity was key to fighting a disease that knows no borders. But while solidarity is forthcoming from the wider population, his government is barely budging from its obsession of putting the needs of business first.

30,000 health professionals have already signed up to help combat Covid 19. Across the country, voluntary groups are coming together.

The Irish government’s response is certainly better than Boris Johnson’s strategy of ‘herd immunity’ and, at a very basic level, we need to push for a 32 county strategy. But the actions of the Irish government are way below what is needed.

Consider last night’s announcement of a break for mortgage holders. This arose from negotiations between the government and the Banking and Payments Federation of Ireland, headed up by none other than Brian Hayes, the former Fine Gael MEP. It was a bit like a couple patching up a domestic dispute rather than any serious imposition on the banks.

Mortgage holders are only getting a ‘deferral’ – meaning that the length of their mortgage payments now increase. Moreover, as the Irish Independent points out, ‘interest is likely to accrue on the loans and will need to be repaid’.

In other words, banks who took €64 billion from Irish taxpayers and who will enjoy tax free profits for more than a decade, are being treated with kid gloves.

And what of those who are renting?
They will have to rely on the generosity of landlords. There is no legally enforced rent amnesty. There is not even emergency legislation to stop them evicting tenants.

Against this, People Before Profit are campaigning for a total Mortgage, Rent and Utility Bill Amnesty while this crisis last.

And what of the many workers who are being laid off or told to take their holidays?
The state has said that those who need to self-isolate as a result, should receive a €305 payment, even if they have not the required number of PRSI contributions.

But surely that should apply to all workers who are laid off?
Take the case of Ryanair who have just sent this message to their staff
‘In April & May, permanent Dublin office staff will receive 50% of basic pay inclusive of any applicable state benefits in the monthly payroll. We will also be reviewing all fixed term contracts and probation periods’.

These workers should get €305 basic pay from the state and the hugely profitable, Ryanair, should be forced to make up much of the rest.

How much would that support cost?
We estimate that €549 million a week or €8.2 billion over 15 weeks. In other words just one eight of what the bank bail out cost this country. Surely, people’s health is far more important than saving reckless bankers.

And what of the many facilities in private hands that could be used to fight this disease?
In Spain, they have nationalised the private hospitals. In Ireland, the government is ‘engaging’ with them.

What about the many private research laboratories run by pharmaceutical firms?
Surely, where appropriate, they should be requisitioned and use to step up our testing capacity.
And about shortage of ventilators? Half of the ventilators for acute hospitals for the world are made in Ireland, many at the Galway based firm Medtronic. The government should be taking control of that plant to ensure there is no profiteering during this crisis and to insist that production is ramped up to supply both Ireland and abroad.

The coronavirus will force everyone to think about how we run our society. We are already vulnerable because of the shortage of hospital beds. We really need change

Not only do we need a government that fixes these past deficiencies, we need one that will tear up the rules of capitalism and put the health of people before profit.