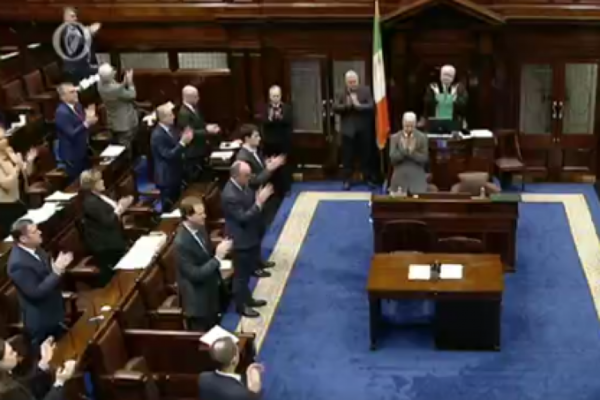 You could not have imagined this a year ago. Last night, on the back of a proposal by Bríd Smith, TDs stood up in the Dáil at 8pm and applauded healthcare workers who are fighting against Covid-19. This coincided with the large numbers of people who stood outside their houses all over the country to show solidarity with the workers who are at the frontlines of this health crisis.

Not much more than a year ago, Health Minister Simon Harris said that penalties for striking nurses were being considered. The nurses fought a heroic fight, eventually dragging some miserly improvements out of a Fine Gael-led government that didn’t want to give them an inch. Now they are applauding the very people they tried to bully into submission last year.

This crisis has brought us to completely new terrain.

Varadkar on Tuesday declared that or the first time in history, Ireland will operate a single tier health service to deal with the crisis. The details are yet to be hammered out and the payout to private industry may be great, but for those seeking healthcare, there will be no distinction between public and private. This, a long-standing goal of the Left, would have been unimaginable even 6 months ago.

As of yesterday, student nurses who do vital work during their placements will be paid – no less than they deserve for the work they do.

Having voted down the People Before Profit-Solidarity Anti-Evictions Bill last year, the Dáil yesterday banned evictions for the next 3 months.

The paltry €203 a week initially proposed for those who lost their jobs due to Covid-19 has now been raised to €350.

There is still a long way to go – pensioners, those on disability and those who lost their jobs before this crisis are still on €203, for example. It is obvious now that these payments should be brought up in line with the €350 payment.

People will still struggle to pay rents on the incomes being proposed – what is needed is a rent amnesty for the duration of this crisis.

Vulnerable populations like those in emergency accommodation, direct provision and family hubs urgently need to be moved to places where they can practice safe social distancing – and there is no shortage of empty accommodation that could be used for this purpose.

There is lots of room for improvement, but there is no question now that the neoliberal playbook has been thrown out the window. Fine Gael will not admit it, but it is clear that free market capitalism cannot solve this crisis. We need socialist measures, or at least measures that move in a socialist direction.

One of the most striking things throughout all of this is the recognition of the workers who are carrying us through – health care workers, the workers stocking the shelves in supermarkets, those collecting bins, driving buses and so on.

Workers who have been denigrated and dismissed for years, who have repeatedly been told they hardly deserve a living wage, are now rightly being lauded as the heroes of this crisis.

For years, it has been bankers, hedge fund managers and the heads of major corporations that have been depicted as the most important people in our society. Can you imagine people coming to their front doors to applaud them?

Yet the shadow hanging over all this, despite all the talk of “being in this together”, are the repeated warnings from Varadkar and other Ministers that we will be paying for this crisis for years to come.

He doesn’t mean Apple when he says this. He doesn’t mean the vulture funds. He doesn’t mean Larry Goodman – who may well profit from a deal on private hospital Blackrock Clinic at the same time that workers in his meat plant ABP Meats are walking off the job because they feel unsafe.

He means the very people who will carry us through this crisis, and those who may suffer the most – workers and the vulnerable.

The ruling class use debt as an instrument to keep us down. When the banks and developers recklessly gambled, speculated and inflated their market until the bubble burst in 2008, we bailed them out. The punishment for the banks we rescued was that they didn’t have to pay tax for years to come. There was a short-lived cap on bonuses. That was all.

Now, through no fault of the workers who are carrying the country – we need a bailout for workers. Are Fine Gael and Fianna Fáil going to stand there applauding health workers this week and months later pile austerity back onto their backs as they try to resurrect big business?

You can bet they’ll try. Are we going to take it?

We may be heading into a dark time. Two of the countries that were worst hit by EU austerity – Italy and Spain – have endured major cuts to their health services and are overwhelmed with the number of cases of Covid-19. Ireland has had more time to prepare – will it be enough?

Whatever happens, we owe it – to ourselves, to the workers who are carrying us through this crisis, to those who have endured the guts of ten years of austerity – never to accept a return to the miserable status quo.

We need to take the Apple tax and write down the debt. We need to wave goodbye to the tax haven Ireland that leaves thousands of homeless people strewn on our streets and thousands of patients to languish on trolleys in our hospitals.

We need to build a new society that looks after the interests of the workers who are the backbone of this country.

We are never going back.