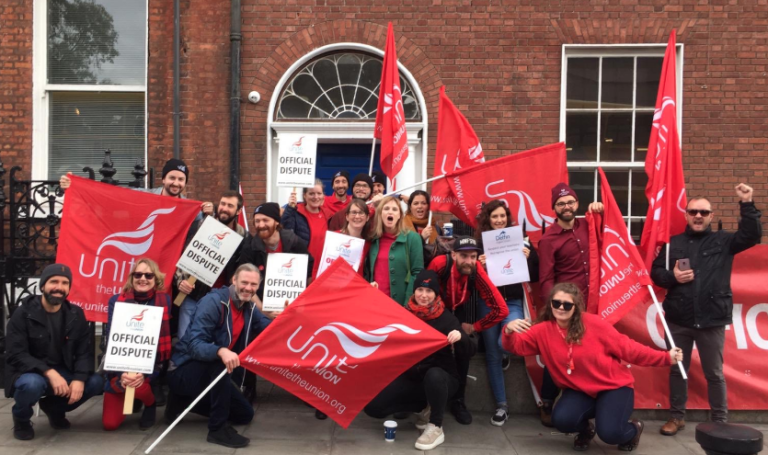 Sharon Graham has been elected as General Secretary of the Unite the Union. Previously Unite’s head of the Organising Department, Graham’s impressive campaign brought some of the most active and connected union staffers together with the most active organising workplace members in the union’s membership. Graham took 37.7% of the vote. The other left candidate Steve Turner took 33.8%, and right-wing candidate Gerard Coyne came last with 28.5%. She will have a five-year term.

Ireland north and south makes up one of Unite’s smallest regions and a majority of Irish branches sent in early branch nominations supporting her platform (each candidate needed 150 Unite Branches to nominate them). Individually our People Before Profit members in Ireland have indicated they supported her because of her platform.

Her platform was the real difference. It promised a renewal of focus on workplace struggle and perspective at building up the union from bottom-up, rather than Westminster and having a place in the UK Labour Party top table. Not only did this appeal to Irish Unite members who feel less impact from decisions taken in Westminster, this position is correct. Union power comes from workplace branches, not Westminster or the Dáil or Stormont.

Back to Workplaces: supporting the rank-and-file struggle against capital

Since being elected, Sharon Graham has warned Amazon bosses that she is in contact with union leaders in Germany and the United States concerning the possibility of an international leverage campaign against the delivery giant. This week she’s also called to ‘bring together all the reps who are currently in dispute so I can personally involve myself in their fight and ensure they have all the support they need.’ A two-page invitation has gone out to all branch activists and workplace reps to facilitate this meeting.

Graham’s election is an important victory for the left in the union specifically its support for strengthening its rank-and-file. Unions are structures are built on working people. They need support, education and organising (and re-organising) especially as job terms have got shorter and the ‘organised workplace’ sees its workforce get older and older. We need a renewal of focus on younger workers in workplaces and a vision of trade unions that understands that union membership is not the norm for a vast majority after decades of neoliberalism here in Ireland.

Sharon Graham promised to provide adequate resources (education, a Limerick Regional Office and more support for working Unite Reps) to the Irish Region to organise workers and build stronger branches. The union must also recognise the political landscape in the south (about 12,000 members) as well as its majority in the north (about 25-30,000) and be willing to work with socialist-left forces on various campaigns, in accordance with the policy conference decisions. Union resources should be more available to branches and union structures need to be more democratic and transparent.

We have to reject any idea that this vote was an anti-political vote. Politics- issues ‘beyond the workplace’ – are very important for trade unions and workers (water charges, Repeal, Black Lives Matter, Raise The Roof). We are facing multiple crises and issues that go beyond struggles specific to any workplace or industry. Climate change, the on-going Covid19 pandemic, growing refugee and humanitarian crises, migrant workers, racism, gender inequality and the threat of the rising far-right: All of these have serious consequences for the working class and deeply impact the lives of millions of workers.

A strong Unite voice on these issues will strengthen the union and attract more young members. Unite should be at the forefront on these issues and work with all progressive forces and left-socialist political parties. Union reps and grassroots activists should engage with the leadership in pushing for political campaigning in these areas. People Before Profit members will stand and fight to win inside and outside their unions.

During the election the Graham campaign came under pressure to capitulate to Turner’s campaign which was endorsed by internal groupings who were heavily influenced by the outgoing General Secretary, union officials and staff. Graham was accused of ‘splitting the left vote’ and possibly clearing the way for a Coyne victory. Graham was right not to give into this pressure, and the voting members proved her critics wrong. The major points Coyne noted to attract activists were around the lack of sufficient supports for reps, activists and working members: a need for more support in workplaces. Graham’s campaign recognised that and stayed left.

Continuity candidates, UK Labour party backing, and official endorsements were not what got out the vote. Active, organising, voting union members didn’t buy into the easy line about splitting the left vote. After all, the moderate left Turner promised very little in terms of vision on how to fight or win that fight on the ground. Unions who talk left have to become unions who act left and by that we mean fight in workplaces and communities. A left-talking bureaucracy writes aspirational left positions statement while stifling or ignoring active fights. They promise ‘easy’ eventual legislative change for immediate industrial peace. The whole union needs to fight for change from top to bottom and we sometimes have to break rules to do so.

Sharon’s progressive vision and victory is an important signal for radical change for Unite. But real change will come from member power and democratic processes in the union. There is much to be done – and much of that is organising in workplaces. Remember only about 12% of private sector workers are in unions at all. People Before Profit members are trade union members who are activists in their workplaces and branches. Our trade unions in the 21st century must be attractive organisation to young, BAEM, migrant, temporary, unorganised workers. At the same time they must fight on the real workplace and real world issues of facing the workers and branches already in their membership.

The popularity of a ‘workplace-organising strategy’ and ‘fighting-union’ platform is a positive sign. This victory also shows the left need not submit to the moderate left to win. We learned that active organising trade unionists know that ‘left talk’ is not going to win in workplace fights. Finally it shows the membership of Unite has built a strong layer of activists who have the vision to organise. They are active and they know we need to fight to win.