The Snobs & The Crooks: Together At Last 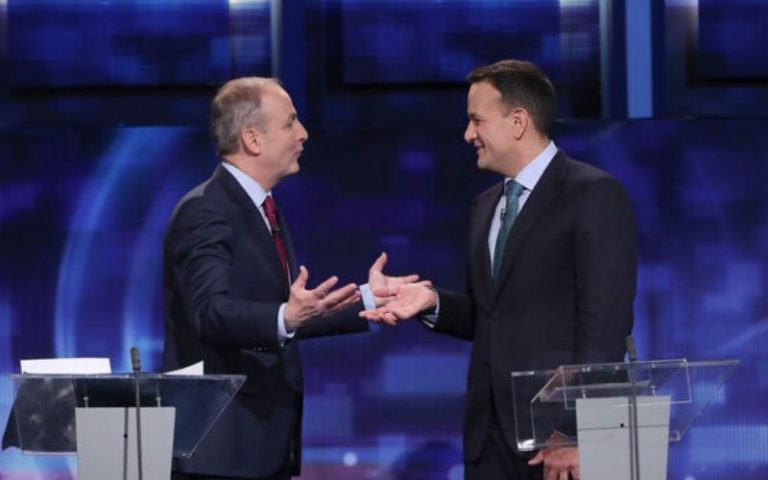 After two months of theatrics, Fine Gael and Fianna Fáil are finally forging ahead to form a government based on a “joint framework”. They have spent the guts of 100 years taking it in turns to rule while the other party played at being the opposition, but the pretence has now come to an end. They can no longer muster enough seats to maintain the facade and are banding together to keep their Right Wing show on the road.

Fianna Fáil have been in power for a total of 61 years since the 1930s. Under De Valera, they bound the State to the Catholic Church. They gave the Church so much power over schools, hospitals and other institutions that it is only in recent years that we are beginning to throw off its shackles. Of course the Church institutions never had to pay compensation for the horrors they inflicted on people in institutions like the Magdalene Laundries or Mother and Baby Homes. And some, like the Bon Secours who were behind the Tuam babies scandal, even now stand to profit from the Public-Private partnership deal on private hospitals.

Corruption is written into Fianna Fáil’s very DNA. The infamous Charlie Haughey regularly took bribes and was involved in the Ansbacher scandal, where the ultra wealthy were aided and abetted in hiding their money from revenue commissioners. His predecessor, Bertie Ahern, signed the cheques for Haughey and was eventually forced to resign. Current leader Mícheál Martin served with Ahern at the time, and never had a word to say about the corruption.

It was Fianna Fáil who set the stage for the current housing crisis. They set up NAMA to buy up distressed properties with public money, and instead of building public housing on this land, they sold billions of euros worth of public land back to private developers at slashed prices. They also slashed thousands of beds from the public health service, and along with Mary Harney and the Progressive Democrats, further entrenched the public-private health divide.

Throughout most of this sorry history, Fine Gael have played the role of the B team of Irish capitalism. The party was founded from a dastardly alliance of the most conservative forces in Ireland: The counter-revolutionary Cumann na nGaedheal party that broke strikes, stopped land occupations and executed Republicans, and the fascist Blueshirts, led by Eoin Ó Dufaigh.

Whenever Fianna Fáil dipped in popularity, Fine Gael stepped in to shore up the status quo, often with the support of smaller parties. They helped ensure that the interests of the rich and powerful would not be challenged and that business as usual would go on.

Following the collapse of Fianna Fáil in 2011, we have had 9 years of Fine Gael rule – and they have stepped up to the plate to show us what they can do.

NAMA continued under Fine Gael, so that by now €40 billion of public assets have been sold to speculators, private developers and vulture funds. Since Fine Gael took over, the number of people living in emergency accommodation has increased three-fold. Focus Ireland reported last year that the number of families becoming homeless every month has increased by 1,000% since 2011.

With regard to health, Fine Gael have repeatedly ignored the calls of health professionals to increase hospital capacity and funding. At the beginning of this year, Dr. Brendan McCann of University Hospital Waterford slammed the government, saying that staff were being “exploited cynically by leaders who understand that it is cheaper to herd patients like cattle” into an ED “bursting at the seams than admit them anywhere else that might give them some dignity”. He said that 2 people were dying every week in UHW alone. Before Covid-19 hit, hundreds of people were dying in Ireland every year because of the criminal underfunding of health services.

And while Haughey’s Fianna Fáil helped the ultra wealthy avoid paying their taxes through illegal means, Fine Gael have simply legalised the tax dodging. The vulture funds Fine Gael have invited into Ireland pay little to no tax, thanks to “loopholes” put there deliberately by Fine Gael. They are still fighting the Apple case and have spent over €7 million in legal fees in order not to take the €13 billion owed to Ireland in taxes by the company. And only two weeks ago, Fine Gael came to the rescue of the tax exiles once again – changing the laws so that any multi-millionaire or billionaire who might be stuck in Ireland due to Covid-19 still would not have to pay any tax.

Over the last 4 years, Fine Gael and Fianna Fáil have attempted to stretch their game just a little bit further – the “Confidence & Supply” agreement was an attempt to put Fine Gael in government with Fianna Fáil attempting to play the dual role of prop and opposition. But this has not worked – the two received their lowest combined vote ever in the last election.

They have finally run out of road. They must now go into coalition and manage the system together.  All of this is being done, they will tell you, in the “national interest”. Fianna Fáil and Fine Gael will now proceed to reassure you that despite never being so unpopular, they still know what’s best for you.

Meanwhile, the interests of the corporations, banks and vulture funds have been served at every turn.

Fine Gael and Fianna Fáil still need a mudguard of independents and a smaller party to make up the numbers, and they might get it. But one thing is certain: The workers carrying us through the Covid-19 crisis and all those who have struggled through a decade of austerity will not sit back and take it. The health crisis means that people cannot take to the streets in opposition like they otherwise might, but this will happen in time.

And when it does, the Fianna Fáil-Fine Gael alliance will be in for a serious fight.