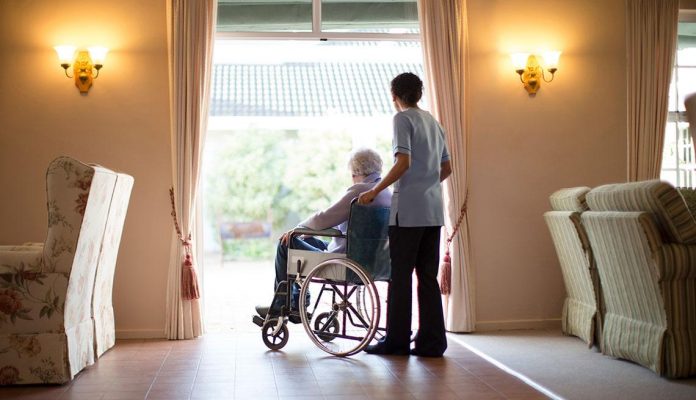 There is a tragedy unfolding in Ireland’s nursing homes. Some of it arises from the natural frailty that grows with age. But some of the deaths from Covid-19 were also preventable.

Care staff in nursing homes should have had regular tests from the start. The HSE should have checked that proper isolation facilities were available. PPE should have been issued. None of this occurred.

In early March, Brid Smith TD asked about prioritising testing for care workers. The state’s Chief Medical Officer dismissed the idea, replying “we are not doing that”.

When asked a similar question in Stormont, the Chief Medical Officer, Michael McBride responded to the People Before Profit MLA Gerry Carroll to say that ‘testing is not a silver bullet’.

Worse. Decisions were made to play down the deaths from Covid-19 in nursing homes. In the North, they decided not to count these deaths. In the South, the HSE issued a guidance note which discouraged the transfer of Covid-19 patients to the hospitals. The note stated that ‘In general, residents in residential care who are coronavirus, also known as Covid19-positive, should be managed in their facilities’.  The Dublin Coronor has stated that many deaths from Covid-19 are not being registered.

These were shocking political decisions. The word ‘political’ is used advisedly because those who want to cover up pretend that that the issue is ‘beyond politics’. Yet somebody makes decisions which have consequences. They will cloud this in bureaucratic speak and seek to normalise what they are doing. But they cannot avoid responsibility.

In the background is the issue that might seem, on the surface, to have little relevance – privatisation. Yet privatisation has been at the centre of two major health scandals in Ireland.

Tests for cervical cancer were outsourced to a US private company, Quest, which gave false positives to women. These tests should have been done by a public facility in Ireland. Now privatisation looms as a dark shadow on our nursing homes.

The Irish state embarked on a policy of privatising care for the elderly in recent decades. In the 1980s, public nursing home beds accounted for 60% for all beds and private for-profit long stay beds made up only 25%. Today that has been reversed and the private sector now accounts for 80% of all nursing up care.

This was the result of a deliberate policy to make tax breaks available to private investors. As the Revenue Commissioners put it delicately  ‘relief for qualifying capital expenditure will be available at the rate of 15% per annum in the first six years with 10% in year seven’. Or more simply, a 100% tax relief.

The only condition was that the private owners agreed to accept public patients who would make up 20% of their intake.  This requirement was not, however, an obstacle but a bonus.

Up to 2009, for the majority of those who needed nursing home care, eligibility was free, apart from 80% of the State pension. Many were sent to public care homes.

The Fair Deal scheme exchanged this eligibility for much more significant charges – 80% of income and 7.5% a year of assets. As Professor Des O’Neill said, ‘this situation would be unthinkable for care for other illnesses.’

It resulted in a massive set of payments to the private nursing homes. Essentially, the National Purchase Treatment Fund agreed a price for care with nursing homes and between the state grant and the individual’s own contribution, the private operator received this sum.

Two examples will illustrate how it works.

In Carlow, the Hillview Convalescent and Nursing home can charge a maximum of €935 a week for a single room. In Dublin, however, the Beneavin Manor Nursing Home can charge €1,294.

With fees like this, there was a rush of often small and medium investors into forming nursing homes. Their spokespersons in the Nursing Home Ireland, still complained that these maximum charges were too low. Nevertheless, a report by Cushman and Wakefield indicated that the homes are now at 94% capacity – in reality, full capacity.

A number of the private operators then began charging for ‘extras’. A Report from Age Action noted that ‘some elderly nursing home residents are being forced to pay up to €100 a week in top-up fees, including “illegal” doctors’ charges – even though they have a medical card, a damning report reveals today.’

Most Irish private nursing homes are still owned by a single owner – but we are at the very start of a consolidation that is typical of any capitalist market. Currently, 37% of long stay beds are owned by corporate groups. Where the smaller private operator sells, they make a good price.  In 2016, for example, the Laurel Lodge Nursing Home in Co. Longford was sold to an Irish company, ACR Healthcare, for approximately €12 million.

Elder care has thus become a commodity. Care is seen as another opportunity for profit but with some considerable advantages for owners. Contrary to most conventional economic theory, which assumes a full knowledgeable consumer, many people in these nursing homes can suffer from dementia or other illness. They are in no position to defend their rights against those who seek to squeeze more profit.

The current strategy flies in the face on international research which demonstrates that that for-profit private care is inferior to that provided by a public system. Let’s summarise some of that research:

Given this body of research, why did all the mainstream parties agree to a policy of privatisation?

The simple answer is that the Irish state bureaucracy is totally wedded to a neoliberal philosophy that public equals bad and private equals good. As the trend towards the privatisation of elder care was occurring in other countries, they also thought this was ‘the modern way’. One of the mechanisms by which this ideology is transmitted is through the hiring of private consultancy or accountancy firms to do reports. These simply ignore research that points to the fault lines in privatisation.

To see how deep this neoliberal mentality is in the ‘state nobility’ – as the French sociologist, Bourdieu, termed the upper echelons of the bureaucracy-  we only have to look at care outside of nursing homes. Only about 4% of the older population over 65 require nursing home care. The vast majority want some additional support and care in their own home. In the past, this was provided by Home Help workers, often recruited on a part time basis from local voluntary organisations. But as part of their strategy of ‘modernising’ this sector, the state franchised this out to big corporations such as Comfort Keepers.

The shift began after the Home Helps began to organise themselves for proper union rights. As a result of their campaign, SIPTU concluded an agreement with the Department of Health to give proper contracts to Home Helps rather than the zero hour contracts that kept them in the dark over whether they were working or not.

However, in a duplicitous fashion the state responded to the organisation of Home Helps by cutting back on their number. Between 2002 and 2004, 737,484 hours were cut. More care work was also handed to franchises like Comfort Keepers and Mary Harney, the then Minister for Health, even officially launched the company. Then in a classic move, the Irish state offered tax breaks to those who needed care. ‘Customers’ or relatives were able to claim a 42% tax relief on the expenditure. This was their alternative to a system of public care.

In brief, the charity or voluntary model of home care was replaced by a corporate, neoliberal model.

However, the drive to privatisation was not just driven by ideology. It arose from a desire to cut costs in a state that has marketed itself as a tax haven. Care in public homes was deemed to be more costly. And when this was combined with a need to renovate and bring up to standard many of these homes, the state decided to simply opt out.

Which raises an obvious question. Why would care in a private for-profit home be most ‘cost-effective’? After all the owners expect to make a profit – and that is a cost. If there are shareholders in the company, they also expect an annual dividend – which is another cost.

The answer is that privatisation, in general, provides an alibi to cut workers wages and conditions. The state makes some claim to be a moral entity, acting in the public good.  A private company makes no secret of its ruthless desire for profit. When that comes from cutting wages that is exactly what they will do.

Which brings us to the nub of the issue. Nursing homes are run by low paid workers who are often migrants and women. Only a small number of nurses are employed and the health care assistants earn about €11 or €12 an hour. The franchised Home Care service is run by the same people who are forced to go from ‘customer’ to ‘customer’ as they log in on their mobile phones to count the minutes spent with the elderly.

When the Covid-19 crisis occurred, the private nursing homes lost 750 of their staff. Many left for jobs in retail where companies like Aldi raised their wages by an extra €2 an hour. Their wages was so low – that they took an opportunity to move.  What they left behind were under-resourced homes which did not have the capacity to isolate or enough nursing staff to deal with the illness.

Then after so many died, the admission was finally made. The private system was in desperate need of public support.

Simon Harris has said that after this crisis there needs to be a look at our model of health care. Well he might. This PR spinner knows that a scandal is brewing and he wants to stay ahead with smoothing words.

We need a different government and a different system. One that treat the elderly with respect and provides a public nursing home system that is integrated into a wider National Health Service. One that gets rid of large US corporations like Comfort Keepers that allows local co-operatives to take on Home Help work based on decent salaries provided by the state.

That will only come when we don’t see care as just another opportunity for profit.