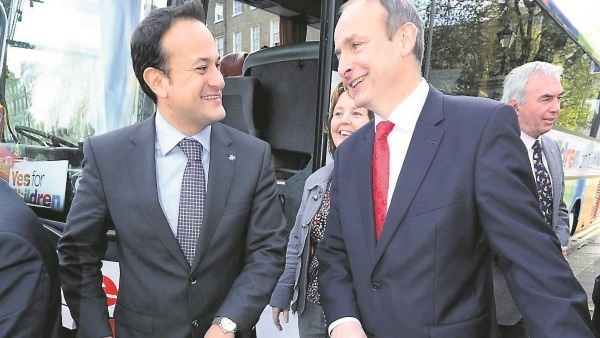 The reaction of the establishment to Sinn Féin holding a couple of public meetings this week is comical. There have already been numerous references to the Nazis and the Nuremberg rallies. There has been a staggering level of scandalised pearl clutching over a perceived threat to democracy.

There are the obvious points to make about this: where was the outrage about an attack on democracy when Fine Gael put a money message on bills like the Anti-Evictions Bill and the Keep It In The Ground Bill? These and over 50 other bills were passed by Dáil majorities and Fine Gael blocked them with an anti-democratic, bureaucratic swindle.

Then there are the public meetings put on by Fine Gael and Fianna Fáil in recent times – more of an exercise in getting their faces on a poster than actually engaging the public at a meeting.

But the most important thing here is what is behind this furore: A contempt for working class people and a deep fear that they might become engaged in politics.

The elites have things nicely set up for themselves. Working class people and the poor are completely locked out of the system. If you’re a corporate lobbyist you can arrange to go for a coffee with the Taoiseach or any Minister and tell them what you want. If you’re an ordinary worker you get to vote for them every few years and might never even meet them.

The whole system is designed to keep workers and the poor down as much as possible, to keep their expectations low, and to demoralise them to the point where many of them won’t vote or otherwise engage in any way in politics.

Now, in the last few weeks, there has been an upsurge in the level of politicisation in Ireland. Everyone is talking about politics. Working people have more hope. They have their sights set on something better than the deepening housing crisis, the crumbling health service and the vicious attacks on workers.

The establishment are spooked and want to dampen the mood as quickly as possible. They want all these uppity workers to get back in their box. How dare they even think about going to a public meeting?!

What will frighten them even more is feet on the street. Like the French workers who recently beat back Macron’s pension reforms. Like we did not too long ago to win a referendum on Repeal. Like the movement that beat the water charges.

People’s spirits are up but if we really want to bring genuine change to this country it will require mass participation in politics, not just by voting, but by mobilising on the streets in huge numb

Let’s start with the demonstration against Fianna Fáil and Fine Gael that has been called for March the 7th at 1pm at the Garden of Remembrance. It’s time to get out in numbers. It’s time to demand real change.