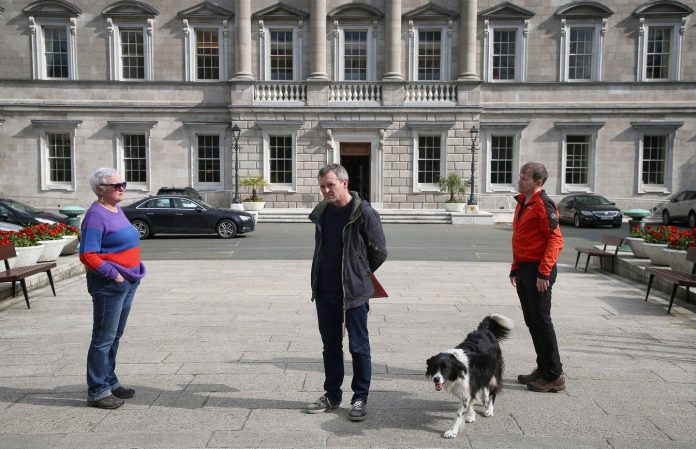 A number of TDs have complained to the Ceann Comhairle about comments from Fianna Fail TD Marc MacSharry about public sector workers.

Three People before Profit TDs have asked the Ceann to raise the issue at the Dáil procedures committee and alleged that the TDs comments amount to defamation of public servants.

Speaking about the formal complaint, Richard Boyd Barrett TD said that the Fianna Fail TD’s comments was based on nothing other than malice and that it amounted to “targeted harassment of workers who had kept the State running through the pandemic”

Bríd Smith TD said that many public sector workers were hurt by the comments given the sacrifice and efforts they had made over recent months she said: “it’s a scurrilous and ignorant remark that will result in many workers facing further abuse for failures that have nothing to do with them.”

Gino Kenny TD said it was deeply ironic that a Fianna Fail TD could attack public sector workers after that party’s history during the austerity years of attacks on the sector and on services it provided. He said: “If there are failures in the provision of public services the fault lies with this government and past governments who implemented cuts in funding, not with workers who have kept this state functioning through the crisis.”

Notes: Copy of letter below:

We wish to bring to your attention comments made by Deputy Marc MacSharry on Tuesday 28th July.

During his contribution Deputy MacSharry defamed every public sector worker in this state. With no evidence other than anecdotal stories, the Deputy claimed that many public sector workers working from home were watching TV or sitting on sofas when they should be working.

Such comments bring the Dáil into disrepute and target and defame thousands of workers. Further not only are they are clearly defamatory in our opinion but will lead to the targeting of many public sector workers whose reputation will be adversely affected.

That this could be said after these same workers have helped the state through the Covid 19 crisis is deeply hurtful.

“Many elements of our State agencies, Departments and local authorities, however, are using this situation as cover to lie on the couch and watch box sets, returning an odd call here and there and doing the maximum of the minimum to tick over during this period. Productivity has fallen and that is unacceptable.”

An “utterance in the nature of being defamatory” shall mean an utterance which, in the opinion of the Ceann Comhairle or of the Committee, could be construed as being defamatory if made other than in the course of parliamentary proceedings whereby a person who has been referred to by name or in such a way as to be readily identifiable has been adversely affected in reputation or in respect of dealings or associations with others, or injured in occupation, trade, office or financial credit, or that the person’s privacy has been unreasonably invaded, by reason of that reference to the person.