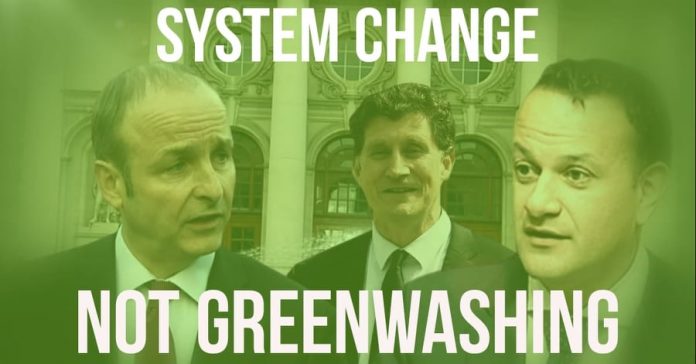 The Programme for Government from Fine Gael, Fianna Fáil and the Green Party is not a radical or far reaching document and will not deliver what we need on climate. It remains committed to neoliberal economics and relies on private investment and private business to deliver renewable energy and retrofitting of homes. This is fundamentally a continuation of the failed Fine Gael-Fianna Fáil policies of the past, with the Green Party being asked to step up once again to be their mudguard.

This deal is built to fail.

The document accepts that cuts to emissions will not feature significantly until after 2026, i.e. after the next election. This is not because of some technical point or because the ground work has to be laid first for future cuts.

It is because there is no way of tackling the systemic cause of emissions without tackling the corporate interests embedded in the current economic system, and that is what this government will never do.

As such this is a fig leaf to hide the predictable failure to deliver any cuts between now and the next election. Failure to reach targets in the next 5 years makes the task of cutting CO2 by 50% by 2030 next to impossible.

It won’t stop the growth of the national herd or tackle the corporate agri-food giants like Larry Goodman:

Agriculture is hardly touched at all, even though it accounts for 30% of emissions. The programme states that, “The special economic and social role of agriculture and the distinct characteristics of biogenic methane as described by the Intergovernmental Panel on Climate Change will be fully recognised in plans to achieve these targets.” (30)

This is an attempt to downplay the role of methane in climate mitigation policy. The claims made in the programme have been refuted in a recent document from Stop Climate Chaos.

The programme’s main proposal for agriculture is: “Building on Ireland’s relative carbon efficiency in food production and ensuring the delivery of the measures identified by Teagasc to the fullest extent possible.” (32)

“The 2019 Climate Action Plan launched by Minister Bruton set indicative targets for greenhouse gas mitigation from the agricultural sector. However, the achievement of these reductions will depend on the effectiveness of on-farm advisory services, and  the voluntary uptake of Teagasc efficiency measures which to date have not delivered promised absolute emission reductions. If current policy is not working, it needs to be changed.”

Moreover, the estimated reductions for agriculture from the Teagasc proposals, is a total of 17.2 million tonnes of CO2 equivalent for the period between 2021 and 2030. Yet, emissions in Agriculture are 20 million tonnes per year, meaning over 200 million tonnes by 2030 if business continues as usual.  A 50% cut by 2030 would require a fall by 100 million tonnes. This programme goes nowhere near that and shows no ambition to even aim for those kinds of cuts.

It does not stop the building of LNGs:

The programme only commits to withdrawing the Shannon project from a priority list of projects in the EU and says it will not support the importation of fracked gas. It says nothing about other non-fracked forms of gas. While fracked gas is a particularly dirty form of fossil fuel in terms of CO2 emission, this is not the only issue. Gas is a problem in all its forms.

The boom in gas production worldwide is driving a rise in methane and CO2 emissions globally and is making any reduction in levels next to impossible. Both Next Decade and New Fortress energy who are the US based company’s pushing the Shannon and Cork projects have huge interests in gas fields across North America.

Much of these are fracked, but many are not and it is conceivable that this agreement would allow for LNGs to be built if they commit to importing non-fracked gas into Ireland.

It won’t stop the growth of Data Centres:

It is estimated that data centres will consume 30% of all electricity produced in the state by 2030. There are major plans for their proliferation across the country, driven by FDI and the needs of big business. They are utterly unsustainable and will consume most of the renewable energy forecast to come online by then, as well as vast quantities of water.

They provide few jobs and are pushed only as a sop to the multi-nationals here who need data centres for their business and growth model. Incredibly, this programme supports and plans for their growth, stating that the Government will endeavour only to make sure they use energy efficiently! Data centre growth is not compatible with Ireland reaching the emissions cuts needed.

It leaves a mass retrofitting program to the private sector to deliver:

Retrofitting homes to a high standard, preferably to an A-energy rating is a necessary step if we are to reduce our energy use, reduce CO2 emission and make our homes healthier. The programme rehashes previous targets and is actually less ambitious than last year’s all party Climate Action plan.

But the real problem is that the role of the state is minimal. The proposed Government is merely proposing a range of incentives for businesses and individuals with vague promises for dedicated apprenticeships who will then find work with private companies to undertake the retrofitting.

It will not be possible to deliver the scale and pace of retrofitting needed if it is left to various private companies competing for the jobs. It will also leave most ordinary workers with impossible costs that cannot simply be deferred onto future energy bills. The voluntary take-up of such a scheme will not reach the levels needed when the cost is to be borne by people already struggling in the middle of a recession.

It plans for the privatisation of Ireland’s renewable energy:

The suggested targets for offshore wind energy show no real ambition and are completely at the mercy of the decisions of private investment and business. They mention exploiting 30GW of offshore wind in deep waters of the Atlantic – but they only plan to develop 5GW by 2030.

Again, the state is only an enabler; it will fast track planning and provide the legal framework while the end goal is a system of privatised energy extraction. Just as both Fianna Fáil and Fine Gael gave away the state’s oil and gas, now they plan to give away our renewable energy.

But the betrayal here is even worse. This programme means that reaching the targets and tapping the country’s huge potential will be decided NOT by the science of what we need to do to combat climate catastrophe, but by the profit needs and investment choices of private companies.

There is no radical transformation in public transport:

There are no targets or figures for how much will be invested in public transport, no figures for the amount of extra buses or trains that will be provided and no commitment to free public transport – merely a review of the fare structure. The NTA, a neoliberal quango that has sought to erode the state public companies in CIE and has privatised bus routes to UK-based private operator GoAhead, will be given greater powers and an even greater role. There are only vague commitments to electrifying the bus fleet with no figures or targets.

This Programme for Government is not a Green New Deal, but greenwashed neoliberal politics. A Fianna Fáil-Fine Gael led government will not come close to taking the radical steps needed to address the climate emergency.

People Before Profit call on the members of the Green Party to reject this deal. The policies presented are seriously lacking as solutions to the crisis. A coalition with Fianna Fáil and Fine Gael is fundamentally a betrayal of the movement. Workers and the planet will be sacrificed in their defence of major corporations and the profit motive.

In facing this coalition led by the two major parties of the right, the climate movement must continue to build strength on the streets, in our workplaces and in our communities and loudly make the call for genuine system change.