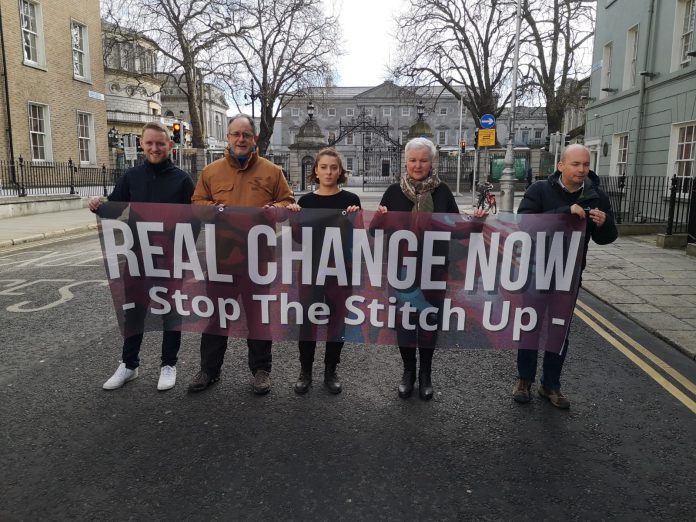 Group calls on people to mobilise for the Stop the FG/FF Stitch Up demonstration, Saturday March 7, at the Garden of Remembrance

A coalition of groups have called for people to come out on Saturday March 7 at the Garden of Remembrance at 1pm to support the Stop the FG/FF Stitch Up demonstration.

People Before Profit TD Bríd Smith said: “We want people to come out on the streets on Saturday to show that the desire for change that was expressed in this country during the general election has only intensified. The political establishment have been running around trying to maintain some semblance of the status quo. The truth is that the thirst for real change in this country is undeniable and people are sick of Fianna Fail/ Fine Gael domination- those days are over.

“People need to get out on the streets and show their support for a left-wing government, one that will push for the real change that is so desperately needed.

“Upon coming to power a government of the left could push a radical agenda to resolve the housing crisis and the crisis in the health system; action on the climate and ecological disaster that we are facing; and a programme that would give working people a real break from the cost of living in this country.

“A Fianna Fail and Fine Gael stitch up is on the cards, and this would halt the demand for radical change. People need to get out on Saturday to show the political establishment that this isn’t on.

“We are calling on people to come out and join with political parties, trade unions, grassroots activists to demand real change – on housing, on health, the pension age, climate action and many other issues.”

Solidarity TD Mick Barry said: “Talk of a government involving both FF and FG is a real slap in the face to huge numbers of people who voted for change on Feb 8. If such a Government were to come into being there would need to be a sustained water charges-style movement built to challenge their right-wing policies and demand real change on housing, health, pensions and climate action. If Fianna Fáil and Fine Gael try to kill the vote for change with a stitch up the Left will aim to turn the mood for change into a movement for change and take it to the streets.”

Paul Murphy TD said: “”As the dance between FG and FF progresses, people need to hit the streets to avoid a government determined to block change. Any government which includes FF or FG will represent the corporate landlords, developers and big business. We need to fight for an alternative government, excluding those parties, to cut the pension age to 65, freeze the rent and increase the minimum wage.”

“After an historic election, where the tired old parties lost their grip on Irish politics, there is a massive expectation for change. The call for an alternative to Fianna Fáil and Fine Gael is growing. The powerful and wealthy are shaking and will do anything to stop change and attempt to keep the old order. A stitch up is in the making as FF & FG have had initial talks on policy. Saturday is the first opportunity for people who voted for change, to mobilise on the streets to send a warning shot over the bow of FF & FG’s flailing ships.”

Ryan Hennessey, on behalf of Homeless Action Ireland, said: “We will be in attendance on Saturday as an act of solidarity with the people of Ireland to speak out against the policies of FF and FG that have financially, physically and emotionally crippled the lives of families children and workers in our communities. We want to highlight the people’s desire and need for change and hopefully that change will come with the backing of a people’s movement.”

Clara McCormack, a second-year student studying political science and geography who is involved with several student and environmental movements including Extinction Rebellion and Cut The Rent, said:

“I’m joining the protest this Saturday because it’s clear to me that issues such as climate change, homelessness, and the inaccessibility of higher education are inherently political issues. They didn’t appear out of thin air, but are the results of decades of exploitative, neo-liberal policies from successive Fine Gael and Fianna Fáil governments. It is obvious that the interests of large private companies are considered long before the interests of ordinary people in Ireland.

“State funding to higher education needs to increase drastically if any sort of acceptable standard of education is to be maintained. Students are paying on average €4,000 more for college now than 10 years ago because of cuts to education. This leaves students more vulnerable to exploitation with regards to employment or housing. People are so desperate to find accommodation for college that they are often forced to live in substandard conditions, while paying rents at extortionate rates. There are students living in hostels and couch surfing, all while trying to work part-time so they can afford to live and study in Ireland.

“I know that by the end of my degree I’ll probably have to emigrate because living in Ireland as a young person is just not feasible. I don’t believe that an Ireland built on the policies of Fine Gael and Fianna Fáil is one that will ever put the needs of ordinary people above the whims of multinational corporations, private investors, or property developers. I want change, and I want to see investment in social housing, education, healthcare, and renewable energy from the state. This is not an unreasonable expectation.”

Disabled And Vulnerable In A Pandemic

Covid 19 Protocol: Workers Will Need To Defend Their Own Health...