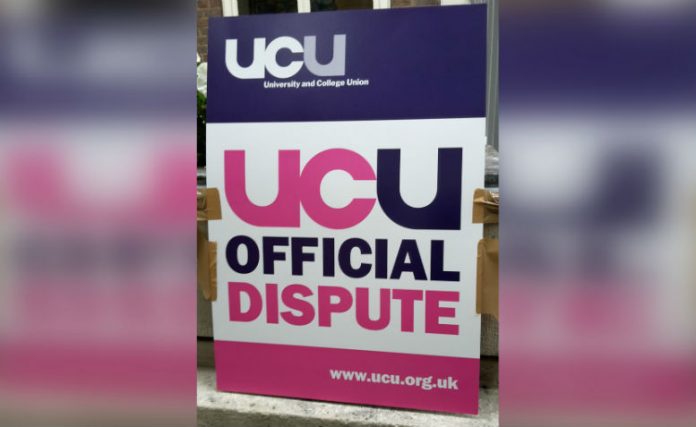 People Before Profit congratulate the activists from the University College Union (UCU) on their successful strike to defend their pensions. There is no doubt that the strike won its main objective: it forced the employers, Universities UK (UUK,) to negotiate with the Union and to concede that there has to be a pension that is not dependent on the stock exchange. Across the country the fantastic picket lines, student support and the Alternative University programmes inspired the trade union movement as a whole.

After rejecting the first deal offered by UUK, UCU members have now agreed 64% to 36% to accept the latest deal and to suspend plans for strikes. People Before Profit members in UCU argued to reject the deal because it is too vague and offers few guarantees that the defined benefits scheme, the best kind of pension, will remain.

The deal that has been accepted certainly represents a climb down from the employers’ original, aggressive stand on imposing a ‘defined contributions’ scheme – one where workers know what they are putting into their pensions but not what they will get when they retire; also, they have agreed to a re-valuing of the pension scheme which many experts think is  financially viable.

It’s worth noting, however, that this was never a deal, but a proposal put forward by UUK with no input from the UCU negotiations committee. Yes, the UCU will have a say in the future of the pension scheme, through an independent panel reviewing how the scheme works. But deliberately vague language was used, such as referring to a pension ‘broadly comparable to current arrangements’ and an ‘intent’ not to abolish defined benefits. The views of the majority of UCU members to “revise and resubmit” the deal to offer more clarification and guarantees was ignored by both the UUK and the UCU national leadership.

In short, the deal that has been accepted by UCU members looks positive, but remains a far cry from the original demand of a guaranteed fair deal on pensions with secure defined benefits and a lasting protection of the status quo.

People Before Profit activists in UCU have been alarmed by the disregard for democracy within the union.  On several occasions throughout the strike, most notably during the discussions on the first deal offered by UUK, it was rank and file members of the Union who forced the national leadership to keep fighting.  At the national meeting in London to discuss the second proposal, the national leadership ignored the view of the majority of branches to ‘revise and re-submit’ the proposal and manoeuvred to call an ‘e-consultation’ on the proposal as it stood.

By having the consultation ballot in the middle of the Easter holidays, it was impossible for activists to campaign for a No vote. The UCU Gen Sec, Sally Hunt, sent FOUR emails to members in the course of the 9 days of the ballot, urging  a ‘yes’ vote, although the NEC had not made any recommendation. This goes against union democracy.

The success of the UCU strike goes beyond forcing the employers to re-think their attack on pensions. The four weeks of strikes revived Union militancy and had activists talking about the future of higher education as a whole. Rank and file UCU members started to look at how the market is invading higher education, bringing with it zero-hour contracts, and cutting workers’ terms and conditions at every level in Universities.  They concluded that staff and students to unite and reclaim their Universities.

If we are not to go back to the days when only the children of the rich got to go to University, a strong Union is needed where the national leadership is answerable to the ordinary members and backs them up instead of undermining their fight. Whether the independent panel secures a fair pension deal remains to be seen, but there is no doubt that the fight is on for the future of higher education, and People Before Profit will support UCU activists in their struggles.