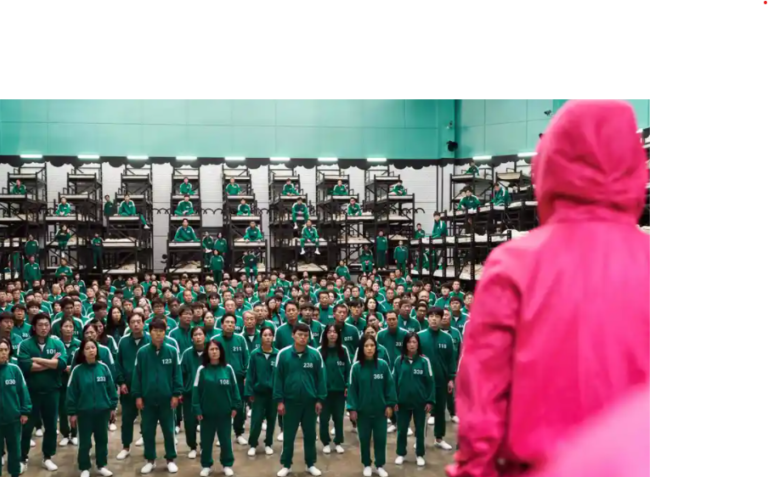 Squid Game has been a runaway hit on Netflix. The setting is a horrible Hunger Games-like television show in a class-divided near-future capitalist South Korea.

Impoverished desperate people are made to play children’s games as entertainment. Winning means an enormous cash prize. Losing means being subjected to horrific punishments as the viewers -the wealthiest- watch, cringe, and smile on, allowing the games continue pretending participation is a personal choice.

Though in Korean, the show is #1 in Ireland on Netflix. People have noted that what makes it relatable is how it makes a dramatic graphic critique of how our society divides people and punishes them under capitalism. Critiques of capitalism aren’t absent anymore in entertainment see recent films like Lapsis (2020) and Sorry to Bother You (2018).

In one key episode the lead character, suitably a former trade unionist, is shocked by a punishment being given to losing players and goes into a trance, flashing back to the source of his own trouble a time when police violently broke his union’s strike. Minsun Ji writing for LaborNotes writes:

“The casual (Squid Game) viewer is likely unaware that these trance visions portray a real-life event in Korean history—the 2009 SsangYong Motors strike. That struggle ended in violent defeat when hundreds of rampaging police charged into the factory and brutally beat down the striking workers.”

ANTI-TRADE UNION LAWS
The article goes on to talk about how real anti-trade union laws in South Korea mean unions and individual workers have to pay damages to corporations. Similarly in Ireland anti-trade union laws have been written and remain on the books. Any trade unionist in the south will tell you about the danger that the 1990 Industrial Relations Act poses for trade unions. In the north, PBP MLA Gerry Carroll’s Trade Union Freedom Bill proposes the first repeals of Margaret Thatcher’s anti-trade union laws from the 1980s- laws that were repealed and replaced in England and Wales years ago, but not in the north.

The imposition of tremendous individualized debts on trade unions and individuals in South Korea led to acts of the most extreme demoralization and desperation amongst the workers who stood with each other there.

These real life extreme anti-union laws in South Korea allow the debts to be laid on the heads of individual trade union reps and organisers, whereas here in Ireland anti-trade union laws are designed to bankrupt trade unions in order to destroy them if they break the laws.

We can now and must now resist and repeal laws favoring corporations on every level and push back in the streets in workplaces, communities and in any government offices. People Before Profit does that by opposing and campaigning against new laws like CETA and old ones like the 1990 I.R.A. or proposing new trade union laws like the Trade Union Freedom Bill we submitted in Stormont last week or Paul Murphy’s Trade Union Recognition Bill.

OUR FIGHT
These are our fights as a party for workers and eco-socialism. The demoralized self-serving views of Fine Gael, Fianna Fáil, the Greens or Labour say it is not worth fighting and that capitalism is the only way. They believe there is no alternative to capitalism. We believe capitalism is no alternative. We have a fight on our hands and it is a struggle but it isn’t unwinnable. Our trade union bureaucracies and ‘centrist’ media and state, our declining right wing ‘parties of government’ and regressive courts must be challenged consistently and moved along.

The whole of our society must change how it sees capitalism as a ‘“tough but fair” boss’.

Capitalism is a bully’s system that punishes people for losing and rewards not just the winners and the cheats. Don’t smile along and pretend it’s the best system… unite and fight to build a better world- one that puts people before profit.

The Irish Anti War Movement, along with several other anti-war and social justice groups in Ireland, has written an open letter to Irish Foreign Minister

The latest report from a United Nations agency shows that the world is on track for a temperature rise this century of at least 2.7

As world leaders prepare to meet at the United Nations Climate Change Conference, also known as COP26, Climate Activists across Ireland are beginning to mobilise