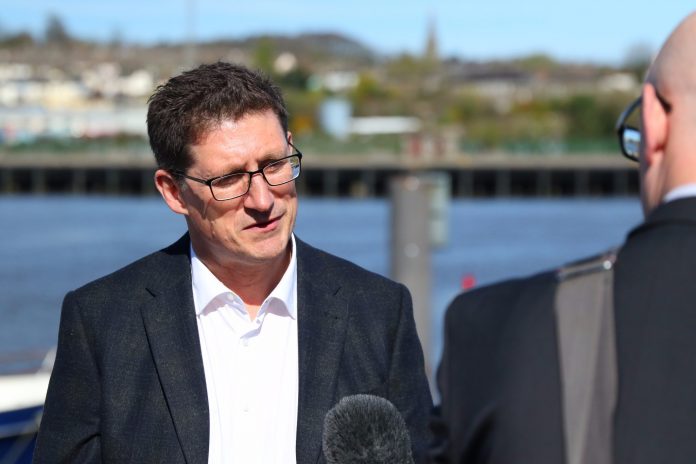 “Our main message to Eamon Ryan today was that the Green Party should not put Fine Gael or Fianna Fail back in power. These parties have been rejected by the electorate who have indicated their support for real change. Instead of entertaining coalition with FF or FG, the Greens together with Sinn Fein and others have a duty to carry through on this mandate by challenging FF or FG to allow a left minority government to be formed. If formed, such a government could start to implement the changes needed to lift the burden from ordinary people – return the pension age to 65, commence a massive public house building programme, implement a rent freeze and ban evictions and drop the Apple tax case. That government would meet with tremendous opposition from big business and billionaires. However, the voters who produced this change should be mobilised to support its key measures. If FF or FG blocked these changes, and an election was called as a result, we could be confident that an even bigger number of TDs outside of FF and FG would be returned at the next election.”

“Fianna Fail and Fine Gael represent the wealthy elite in this country and will not deliver the change needed – on climate action, housing, the pension age, workers’ rights and health. We need a left government that will implement a €15 an hour minimum wage, reduce and freeze rents, ban evictions, build 100,000 social and affordable homes in the next three years, establish a public one-tier national health service that is free at the point of use and separate church and state. Crucially, to underpin real change, it’s necessary to break with the rigged capitalist economy through the democratic public control and ownership of the key wealth and economic resources. If the Green Party and Sinn Fein ruled out coalition with either Fianna Fáil and Fine Gael, it could give a huge impetus to creating an active people power movement of trade unionists, working-class people generally, but particularly young people, which really could change Irish society. If they go into coalition with FF and/or FG they will be responsible for betraying the hopes and aspirations of the people who voted for real change on February 8.”

“A crucial reason for the rise in support for the Green Party is an increased awareness about the need for urgent and radical action on climate change. Our proposals in the last election went much further than the Greens in pointing to the eco-socialist policies necessary to effect a just transition to a net zero carbon economy by 2030 – including free, green and frequent public transport for all, massive public investment in Green Jobs, including renewable energy, halting of the Shannon LNG project, and a rapid transition to sustainable agriculture based on ending the domination of big agri-business and the beef barons. However, it’s clear that even the more limited proposals of the Green Party, including annual emissions reductions of 7.6%, free public transport for all students, doubling investment in public transport and massive investment in offshore wind will not be agreed to by Fianna Fail or Fine Gael. Any government which involves FF or FG will just use the Green Party to greenwash austerity policies, while continuing with the big business as usual, bringing us closer to climate catastrophe. An alternative government, excluding Fianna Fail and Fine Gael, is necessary, in order to begin to take even relatively minimal steps to reduce carbon emissions by making the big business polluters pay, instead of working class people.”