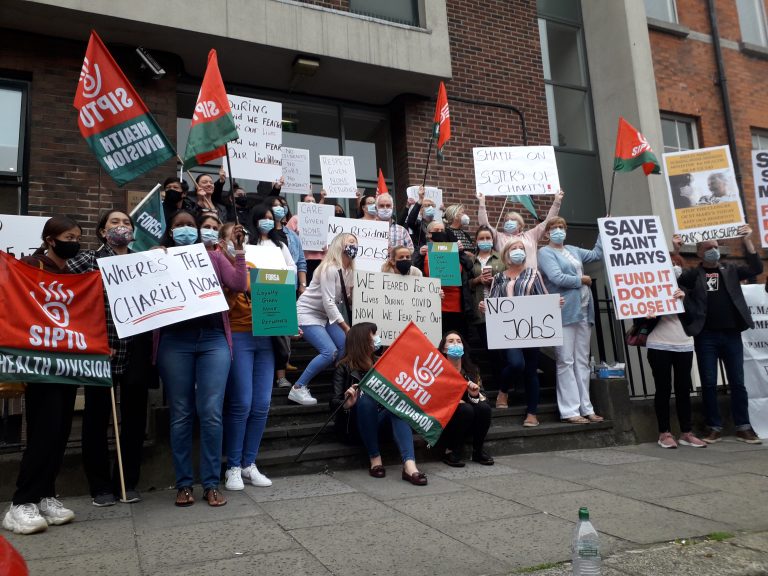 ‘The residents may believe in God, but they’ve no faith in this government.’ – SIPTU union rep and Health Care Assistant Liz Meade.

Care home workers, relatives, trade unionists and supporters protested at St Monica’s nursing home today for a second time. The Religious Sisters of Charity are closing the home – the third facility they have decided to close in Dublin in recent weeks.

Managers initially presented the closure as the result of a complication from a HIQA requirement and a missed deadline. However, it appears now that the sale of the land on which the Sisters of Charity operate is the real reason. Facilities are being wound down and staff are facing surprise redundancies.

According to Health Care Assistant and Fórsa member Lisa Walsh:

“Residents are being thrown out of their homes. We’re losing our jobs. It’s stressful for everybody, including the families. Families weren’t allowed to console each other while this was happening. Other residents are left in limbo. We (the workers) had to help the residents move out. We don’t know when the liquidators are coming in. Are we going to go in one morning to find the place closed?”

The protesters were joined by campaigners from St Mary’s nursing home. Their experience at the hands of the Sisters of Charity offers a cautionary tale to all workers. We need to build active fighting unions together in our workplaces, supported by active fighting union officials who are prepared, confident and committed to supporting members and recruiting and educating workers with us.

Like St Mary’s, money has been sucked out of St Monica’s accounts at an alarming rate over the last few months, allowing the Sisters of Charity’s companies to project poverty and claim that ‘there is no alternative’ to ‘statutory redundancy’.

This liquidation technique echoes the story of Debenhams. So much so that, six Debenhams workers including their elected reps came to today’s protest from their 24-hour 123-day picket. They arrived with solid pragmatic advice for workers at risk of a Looter’s Liquidation: “Don’t get locked out – Get locked IN”.

Experience from Thomas Cook (2009) and Grafton College (2018) shows that when facilities are closing workers are left without the leverage of typical industrial actions like strikes and demonstrations. Occupations allow workers a physical platform to win justice.

For the workers at St Monica’s this currently means getting a decent redundancy settlement. But an occupation would also allow them to argue that the state should take over this important care facility (and others too) and save the jobs of those who work there.

Today’s demonstration showed the importance of workers from different struggles linking together.   As the Debenhams dispute has shown, current laws are biased against workers. Workers need to learn from each others’ experience, and that’s what made today’s protest so significant. It plants the seeds of workers’ co-operation in 2020 when so many closures may happen. It lays the basis for a general campaign to defend jobs and protect workers’ rights.