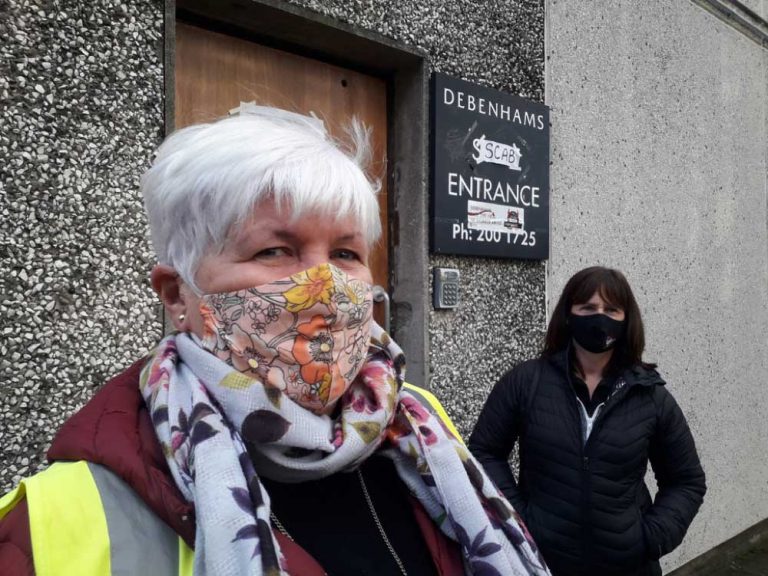 How are things here at the Blackrock picket since yesterday (when the High Court granted an injunction)?

What’s your name and how did you get involved?
E: Eilish. I worked here.

G: Geraldine. I worked here too.

The system seems insistent on not paying the workers. How do you feel about being singled out like that?
E: Disgusted. It’s hard to believe.

Why are they so insistent on seeing that working people don’t get treated fair?
E: Because we’re at the bottom of the barrel. Had they not shut down in the pandemic, we could have easily got our two plus two*. I think there is money there. They are hiding it.

Are Debenhams still making money in Ireland?
G: They are. A lot of money. But it’s through online sales.
E: Time and time again, day in and day out… we were told that the revenue from online sales would feed into the company. They said the more money we made for the company- the greater the assets and sales, the more secure our jobs would be. We were pushing online sales in the store ourselves. Debenhams are still making money from sales online in Ireland.

G: It was 20 or 30 million a year I think. And online sales went up during the pandemic of course.

E: People still want to buy their regular skirt or trousers. So they go online…

Any advice for people who want to help see real justice done?

E: Write to politicians about implementing the Duffy-Cahill**. There should be a review of the 1990 Act***. Come Brexit, Marks and Spencers for example could do the same thing. The government has to bring in these changes. They say they can’t do it, but they saved the banks overnight. They can put in changes that were supposed to be impossible.

What if government don’t put in the changes?
G: They’ve got to.
E: They’ve just got to.

So why haven’t they?
E: Because there’s us down here and them up there. And they don’t want anyone in the middle. They just want a two-tier system. Like Geraldine was saying before, it’s what our forefathers fought against. People must be turning in their graves.

Thanks for the interview.

There is deep wide public support for you and your and real disgust for the treatment KPMG and Fianna Fáil/FG/Greens have given you. Six months on the pickets for fair play and solidarity. Keep up the fight.

People Before Profit members have immense respect for you and this fight. We’re inviting all our members and public representatives to visit and support your pickets. Up the workers!

*2 plus 2: the agreement workers had with Debenhams which had with workers guaranteed 2 weeks’ pay for every year worked on top of the statutory minimum 2 weeks’ pay for every year worked. The total pay all of this for all workers is just over 10 million. KPMG wants to avoid giving this to Debenhams workers despite these clear terms in contracts they worked under. In September a derisory 1 million was offered. This of course did not begin to address the core demand of paying all workers what they are due.

**The Duffy-Cahill Report was commissioned in the aftermath of the closure of Dublin retail landmark Clearys. It would have guaranteed that a liquidator would have to pay collectively agreed redundancy terms as well as statutory redundancy. Government since 2016 have failed to implement it.

***The 1990 Industrial Relations Act severely limits strikes and make sit almost impossible to take effective strike action. An injunction was granted against the Debenhams workers as they are deemed to be in breach of the Act because they have prevented stock from leaving the stores.

On 24 March People Before Profit hosted their second workers’ forum. The topic was ‘Winning Workers – Taking On Precarity’. Jane Hardy former professor of