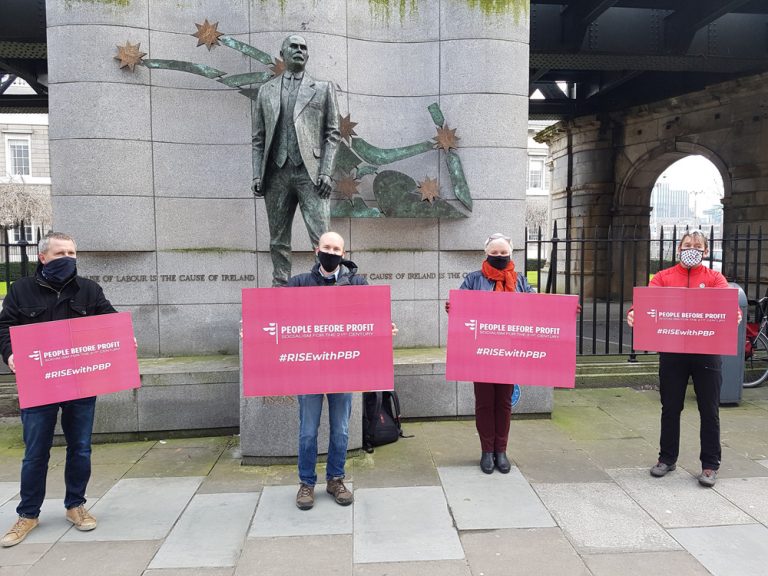 A major online rally under the title of ‘#RISEwithPBP – Uniting for workers’ rights & ecosocialism’ will take place on Thursday 4 March at 7.30 pm.

Join us on Thursday to celebrate this great news and discuss how together we can build a strong eco-socialist voice for workers. Registration for the rally can be found here: https://forms.gle/3Dnz7E76H6aLb7K16.

We are also asking our supporters to share the following video online with the hashtag #RISEwithPBP: https://www.facebook.com/peopleb4profit/videos/1129412480851278/

Today, RISE, which includes Paul Murphy TD and environmental, feminist and trade union activists across the country, announced that they had decided to join People Before Profit. This comes after a period of discussion between RISE and People Before Profit and overwhelming votes of members of both organisations in favour of this step.

In their joint statement, RISE and People Before Profit described the move as “a significant and extremely positive step forward in the project to build a broad political force for working people and eco-socialism.” The two organisations noted a very significant growth in interest in left-wing politics over recent months, with hundreds of people joining People Before Profit every month.

The two groups noted that during the general election of 2020, they had led the hugely popular call for a left government to break the 100 year cycle of Fianna Fáil and Fine Gael rule. They said a key priority for them was to continue to campaign for a genuine left government, not simply based on parliamentary arithmetic but rather on serious campaigning outside the Dáil, and on the basis of socialist policies to address the housing, health and environmental crises.

Paul Murphy TD: “All of us in RISE are excited to be joining People Before Profit to help build the left challenge to Fianna Fáil and Fine Gael rule and the capitalist system. It’s clear that people voted for change in the last election and the disastrous policies of the government over the last year only underscore the need for the socialist left to come together to help kick them out.

“People Before Profit is a party that does what it says: it puts people’s needs, including our environment, before the profits of big business. It’s no accident that RISE and People Before Profit have led the call for a Zero Covid strategy, and have demanded what workers need, not just what the government says it can afford. By joining PBP we will also be strengthening the call for eco-socialist change to combat the climate and biodiversity crises. We appeal to all those who want to fight for radical change to join with us.”

Bríd Smith TD: “All those sick and tired of this government dragging its feet on women’s rights, LGBTQ rights, disability rights, and climate action, we appeal for you to join us. We need to build the biggest possible challenge not only to this government, but also to stop the growing far right groups and their racist ideas. We have been campaigning before it was fashionable or popular for abortion & LGBTQ rights and the separation of church and state. We have been at the forefront in campaigning for radical climate action, bringing forward the first Dail bills to ban fracking and fossil fuel extraction, proposals for free, green and frequent public transport and legally binding CO2 emission reduction targets.”

Richard Boyd Barrett TD: “For some time already, People Before Profit and RISE have been ahead of the curve and leading the way on issues such as campaigning for a left government, restoring the pension age to 65, supporting workers such as Debenhams workers, student nurses, artists, musicians, taxi drivers and others. We had the political principle and courage to call for a Zero-Covid strategy long before others and when most parties were caving into lobbying by corporate interests and pressures for short term popularity.”

Diana O’Dwyer (RISE activist): “We are proud of the work of RISE over the last year and a half. From the beginning we have sought to popularise environmental policies which benefit workers and young people, such as free public transport and a 4-day week without loss in pay. We’ve worked with PBP over the last year and feel that its focus on building people power campaigns, and its unstinting opposition to Fine Gael and Fianna Fáil and the profit system they defend makes it well positioned to grow over the coming years. RISE will function as a network within PBP and continue to produce our quarterly ecosocialist magazine, Rupture, and our podcast, Rupture Radio.”

Cailín McCaffery, People Before Profit representative for the Court District Electoral Area in Belfast, said: “For workers and communities across the country, this is an important step forward. We need a political party which represents us, because the establishment parties clearly represent the interests of the developers, big business and bankers. This development will significantly boost the already fast-growing project of building a radical political voice for workers, climate activism, socialism and a genuine left government on an all-Ireland basis. We are campaigning for a border poll to end partition, through grass-roots campaigning for a united socialist Ireland, by uniting working people North and South, Catholic and Protestant.”

Five key priorities for the expanded People Before Profit are: