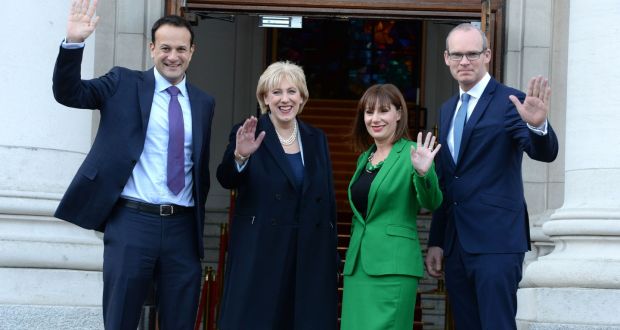 Fine Gael Councillor Jim O’Leary made headlines yesterday when he tweeted about his “love” for a photo of the Blueshirts engaged in a Fascist salute. And indeed, this isn’t the first time he has said something like this. A few months ago, he tweeted, “Thank God for the Blueshirts, who saved us from working class republican socialists, communists and anarchists”.

Leo Varadkar and Fine Gael make no secret of their hatred of the working class, but will they allow open support for the Fascist Blueshirts to stand? Thus far, O’Leary has stood by his comments and Fine Gael have declined to comment.

O’Leary’s latest outburst comes only a week after Varadkar’s speech last week where he described racism as “a virus”. How can anyone take him seriously if representatives are allowed to declare their support for a Fascist group that railed against “foreigners and Jews” and at one point was hoping to establish a Fascist dictatorship?

But once you take a look, you find that racism is rife in Fine Gael. In recent years there has been a veritable litany of racist incidents involving their representatives, many of whom have stoked up racism to appeal to their base and to divide workers against one another.

Minister for Culture Josepha Madigan not long ago campaigned against the provision of accommodation for Travellers in Mount Anville, with a leaflet saying that this would be “a waste of valuable resources”.

Varadkar himself declared last year with no evidence whatsoever that people were coming to Ireland from Albania and Georgia with fake documents.

Then there is Verona Murphy, who said that asylum seekers would need to be “deprogrammed” for fear they might have been “infiltrated by ISIS”. She was supported by Fine Gael until she didn’t win a seat in the bi-election – only then was she removed as a candidate.

No action was taken against Limerick Councillor Stephen Keary, who said that “non-nationals” and “Eastern European benefit tourists” were responsible for hospital waiting lists a few years ago.

Kildare Councillor Darren Scully was expelled from Fine Gael for saying he wouldn’t represent Black Africans back in 2011. He was welcomed back into the party two years later, and in 2015 declared that the drowned Syrian refugee toddler, Aylan Kurdi, and his family, “were not fleeing for their lives”.

More recently Councillor David McManus of South Dublin said that those who attended Black Lives Matter protests should have their €350 Covid payment stopped. McManus has had absolutely nothing to say over the scandal in Direct Provision where asylum seekers have been prevented from social distancing. Nor has he called for sanctions on meat plants who have put their workers in danger. Instead, he has targeted anti-racist protests and taken the opportunity to engage in some welfare-bashing at the same time.

Jim O’Leary is not an anomaly in Fine Gael, therefore. Fine Gael stoke up racism on a regular basis, and they do so for a reason.

Challenging any of these issues would require tackling the big corporations, the landlords and the elite interests that Fine Gael represent. They have zero interest in doing this, so instead they stir up racism to appeal to the most reactionary elements of their base and to pit workers against one another.

Varadkar is right to say that racism is a virus, but what he did not say is that it is also a weapon – a weapon that Fine Gael often wield when it suits them.