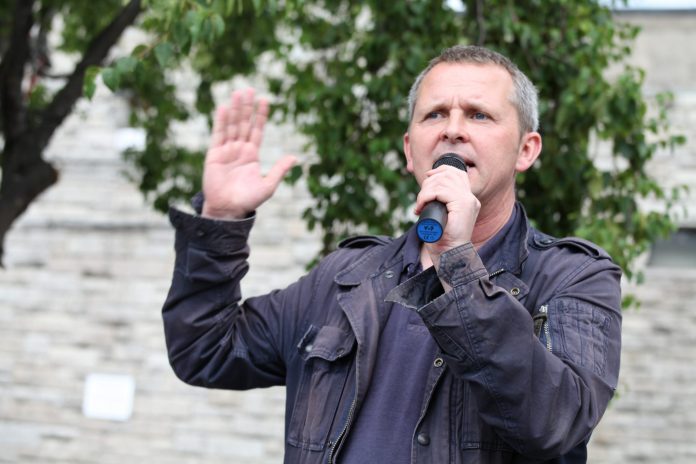 Protest held in Dún Laoghaire over closure of NCBI centre

A protest was held today at the National Council for the Blind at Clarence Street in Dún Laoghaire against the closure of the service which is set to be transferred to Tallaght despite assurance from the NCBI and the HSE to the contrary.

People Before Profit TD Richard Boyd Barrett has said that he is “absolutely outraged” about the transfer and in one case the dismissal, of members of staff from the National Council for the Blind centre in Dún Laoghaire and the potential closure of the facility.

The TD was echoing the feelings expressed to him at a protest last Friday at the offices of the NCBI in Dún Laoghaire where services users assembled to protest against the dismissals and the expected closure of the centre which provides such vital services to the blind and visually impaired community of Dún Laoghaire, North Wicklow, Ringsend and other areas.

The TD said that this move by the HSE represented “an awful betrayal to the services users of the NCBI and the blind and visually impaired community in Dún Laoghaire and the wider region which this centre services.”

Richard Boyd Barrett raised this issue with Health Minister Simon Harris this week who seemed to not be aware of the situation but said he would make enquiries with the HSE and report back to Deputy Boyd Barrett.

“This move is a shocking betrayal to the blind and visually impaired community in my area and the surrounding area of North Wicklow and as far out to Ringsend. The people who use this service have been told in the past that if the centre was to close they would have to travel out to Tallaght to get the services they need- that is just not acceptable.

“These people who are vulnerable being told by the HSE that they have to travel a huge distance to avail of a service that was being provided locally is disgraceful and totally at odds with the best interests of the blind and visually impaired community in Dún Laoghaire and the surrounding areas.

“I have asked that the minister look into this matter and prevent the transfer of these staff members, who are adored and desperately needed by the service users, and for him to ensure that this vital resource remains open in Dún Laoghaire.”

Service user, Michael Griffith said: “NCBI have made a major strategic error in trying to amalgamate the services for HSE Area 6 (South Dublin and Wicklow) with Area 7 (West Dublin) because it is not reasonably possible for visually impaired people to access Tallaght by public transport from the Area 6 region. We are now calling for a reversal of this decision and a full restoration of services in Dún Laoghaire. Redundancy notice must be withdrawn, the current services maintained and the IT support service which was available in Dún Laoghaire until a few years ago be restored.

“I have been in correspondence with the HSE about the removal of NCBI staff from Dún Laoghaire and the transfer of the service to Tallaght. For the visually impaired and blind community in South Dublin, this would be a disaster.

“We are urging the Minister and the HSE to intervene in this matter and prevent the NCBI service being taken from our area. We also would say that the service users were not involved or included in any way in the review process. We, as service users should be consulted in any review of the NCBI service. Minister Harris must step in and prevent this service from being transferred to Tallaght.”