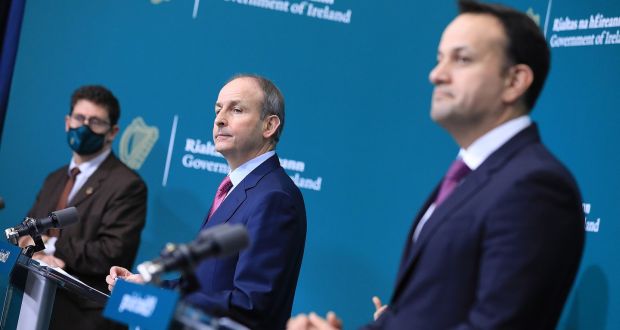 Speaking in the Dáil today, during the debate on the “National Aggressive Suppression Strategy’ motion, People Before Profit TD Richard Boyd Barrett said that the government is living in a fantasy world where they think that the virus can be negotiated with and repeated the party’s long-standing call for the government to adopt a Zero-Covid strategy.

He said that the premature opening of sectors of the economy while virus levels are still high, such as the proposed reopening of construction on the arbitrarily selected date of March 5, announced by Minister Darragh O’Brien this week, risks a repeat of further surge and lockdown.

He said that it is clear that the government had not learnt their lesson from the pre-Christmas opening of sections of the economy and that this had the potential for a repeat of the dire mistakes that led to the terrible surge of infections and fatalities in the new year.

He welcomed the shift in position of the Labour Party on the issue of Covid strategy, but asked for Labour and other opposition parties to acknowledge the mistakes they made last year in calling for pubs to re-open, for the resumption of international travel and supporting the government’s failed Covid strategy.

He said: “It beggars belief that the government has not learnt their lesson on what happened following their disastrous decision to reopen sectors of the economy before Christmas when virus levels were too high.

“It’s simply incredible the government are still talking about “Living with Covid.” This is not a “live and let live” situation. This is a virus that kills, that makes people sick, that leads to our hospitals and health workers being overrun.

“I do not think that the impact of the pre-Christmas reopening decision on the health services, health workers and on society can be understated. Health workers are totally burnt out, people are dying in large numbers and there has been a very serious impact on the mental health of people.

“For the government to announce an arbitrary date for when they will reopen construction, when we have no idea what virus levels will be like is evidence, in my view, that they are living in a fantasy world where they still think that the virus can be negotiated with.

“Any premature reopening of sectors of the economy while the virus is still circulating at very high numbers and when we have not eliminated community transmission is a macabre recipe for further surge and lockdown.

“People Before Profit have been campaigning since last September for a Zero-Covid strategy. The failure of the government’s strategy is now plain to see. Why would we not at least try to follow the example of countries like New Zealand, Australia and many countries in Asia who have successfully adopted a Zero-Covid strategy and where as a result most people, most of the time are leading normal lives?”

Another NAMA Scandal waiting to happen People Before Profit have said that the Land Development Agency (LDA) Bill, commencing second stage in the Dáil tomorrow,

People Before Profit cllr Adrienne Wallace is leading the call for a revamp of Carlow council’s social housing allocation policy. She said it is time