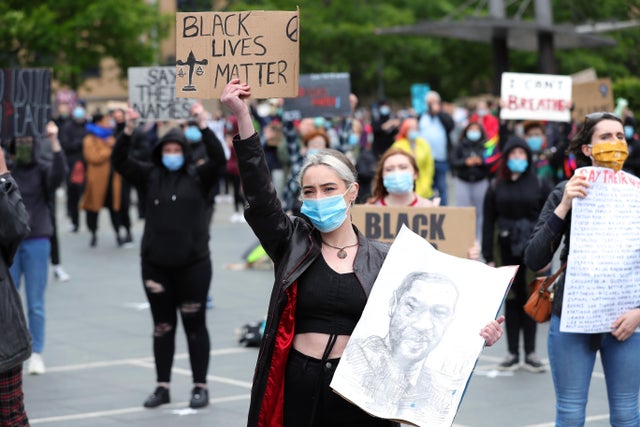 Despite a concerted attempt to stop protests, the Black Lives Matters movement drew thousands onto the streets over the past few days with social distancing.

The worst attempt to prevent protests occurred in the North where police staged roadblocks, called to the houses of organisers and issued on the spot fines. This followed a joint executive statement signed by the DUP and Sinn Fein.

But an aerial photograph showed that during Belfast protest participants stood in squares apart from each other. Despite this, police in Derry and Belfast issued on the spot fines. In sharp contrast, the PSNI failed to visit any of the meat plants where many workers contracted Covid-19 due to the lack of proper social distancing.

In Dublin, there is a criminal investigation under way into the Black Lives Matter protest that took place in Dublin on Monday June 1st. the targeting of these protests under the pretext of safety concerns is all the more outrageous when you consider that the state has not found it necessary to pursue the flagrant flouting of Covid safety restrictions by bosses on building sites, of Keelings, or in the meat plants.

Seems there’s one rule for big business, another for ordinary people trying to assert their human rights.

Despite this intimidation by the state, the sheer scale of the protests shows how strong feelings are running – and it is not just about events in the USA. At every protest there was a call to end Direct Provision in Ireland where 6,000 people are being held in cramped conditions run by business people whose main concern is profit.

As well as Derry and Belfast, protests were also held in Dublin and social distance measures were taken at the SPIRE on O Connell
Street and the US Embassy. In Waterford, 700 people marched through the town in an unofficial protest after original organisers
cancelled the event. A big protest also occurred in Galway where participants adhered to social distancing rules. In Carlow, protestors met in a wide-open space and kept well apart from each other.

For the first time, young Irish-Africans played a leading role in protesting and many spoke of how tired they were of racist abuse and racial profiling.

In almost every area, a high level of responsibility was shown as people every effort was made to keep social distance.

This movement shows no signs of abating and we should all support it. An injury to one is an injury to all. Please sign this petition calling for all fines and charges against BLM activists to be dropped.