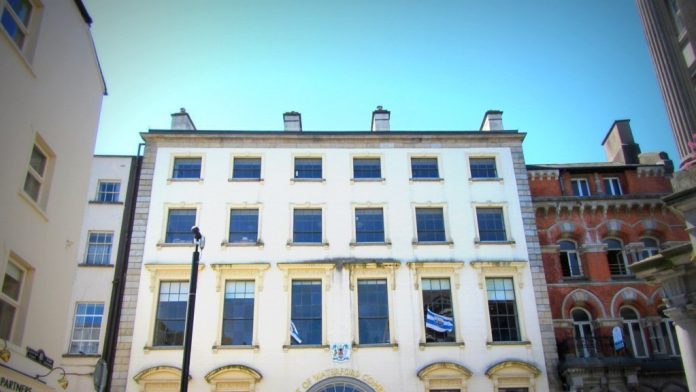 Úna Dunphy of People Before Profit has called on the Waterford City and County Council to acknowledge the existence of Waterford’s Georgian heritage, and demands effective steps to reverse decades of official neglect, casual abuse and rampant decay of the Presbytery building on George’s Street, and indeed of other Georgian buildings on the Mall, Parnell St. and Lady Lane.

Ms Dunphy said “This heritage week we are focusing on the old Presbytery building, because it’s located on an important, and much used City centre street in the Cultural Quarter, an area earmarked for upgrading and regeneration .

The Quarter already has the new Municipal Art Gallery, Garter Lane 1&2, and the area will soon house the Rogue Arts Gallery.  It also has an eclectic mix of niche retail units and world cuisine eateries. “

Restoring the Georgian Presbytery, preserving its original features, whilst installing all of the comforts of modern living ,would allow it to be used for a myriad of purposes, including in the Arts sphere, or as a possible accommodation and co-living building for students attending the nearby WIT School of Architecture.

Funding for such projects is available from the Heritage Council, Georgian Society and other areas, including under the 2015 Living City Initiative.

All other Irish cities with a previously neglected Georgian heritage have recognized the long term value of maintaining this part of our built heritage, and have completed, or have ongoing restoration projects.

“We call” said Úna Dunphy, “on all the Councillors and political groups represented on the Council to make the preservation of the old Presbytery a priority, and we demand that WCCC officials initiate a realistic plan and timescale for the full restoration of this important listed building. “