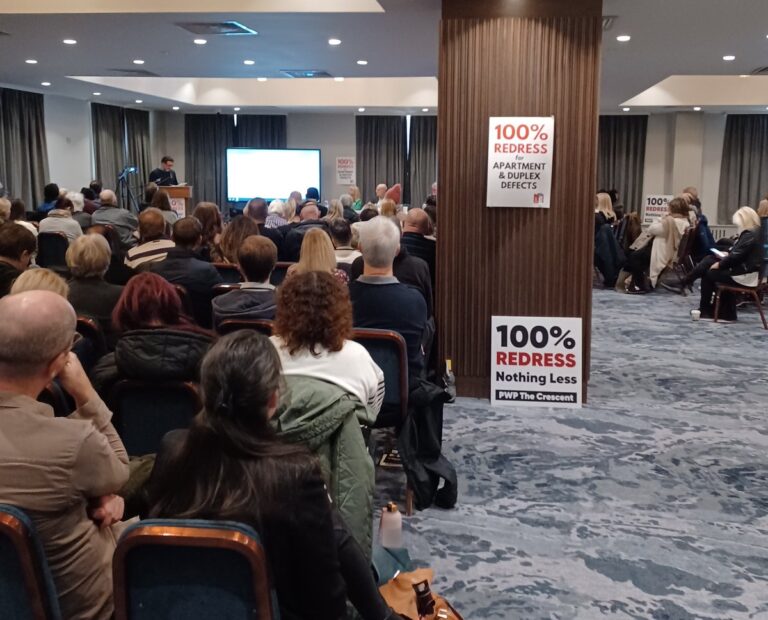 “We did everything right. This is not our fault. This is a result of governments that allowed builders to self-certify.”

Around 150 people gathered to discuss “How to win 100% redress for apartment & duplex defects?” Residents organised in the campaign, Not Our Fault – Apartment/Duplex Defects, pulled together the conference to raise awareness and discuss a strategy for both winning a 100% redress scheme to cover the cost to fix the defects and forceing the government to go after the builders responsible.

Many of us have seen the crumbling homes in Donegal affected by mica and defective blocks. But did you know that according to a recent government report, up to 100,000 apartments and duplexes built between 1991 and 2013 have defects that make them unsafe? The majority of defects relate to fire safety, with walls, ceilings, and floors not properly constructed with materials that stop the spread of fire from apartment to apartment. Other defects relate to structural problems with unsafe balconies or “water ingress”, which basically means the homes are prone to damp and mould.

Like the Mica campaigners, these residents have done nothing wrong. They are victims of successive FF and FG governments which have allowed developers and builders to self-certify, leaving homeowners in a precarious and potentially life-threatening situation.

Some residents have been alerted to these issues and pressured to pool together money to fix the defects, which on average cost per apartment/duplex is around €25,000, but some residents have been told it will be a whopping €68,000 per unit. However, with the Mica campaigners showing the way, residents are beginning to get organised to resist the pressure to pay for the fixes themselves – in many cases, they simply cannot afford to do this anyway – and to demand 100% redress from the government and for the state to pursue the developers responsible.

The day-long conference heard from #NotOurFault campaigners as well as the Construction Defects Alliance and the Mica Action Group. All political parties were invited, but only People Before Profit and Sinn Féin sent representatives to outline their position on the issue. Paul Murphy TD, who has been working with the #NotOurFault campaign to assist their organising efforts and to help connect different apartment complexes together, explained that not only does PBP support 100% redress, “it’s also the only workable solution as tax credits won’t work for many owners, and because the defects are in adjoining walls, floors, and ceilings, you need everyone on board or nothing will get fixed.” Eoin O’Broin TD said Sinn Féin supports 100% redress and commended the residents for getting organised.

The government is due to release a memo outlining their plans for addressing the apartment and duplex defects before the Christmas recess, so residents have organised a protest at the Dáil on Wednesday, December 14th at 1pm to maxismise the pressure. A committee involving residents from apartment and duplex complexes across the country has been set up to organise this and future actions, including a #NotOurFault contingent at the upcoming Raise the Roof Protest on 26 November.
We encourage PBP activists to reach out to apartment residents in your area, make them aware that their building may have defects, and if so, to join the campaign to fight for 100% redress. You can follow the campaign on Facebook and Instagram.