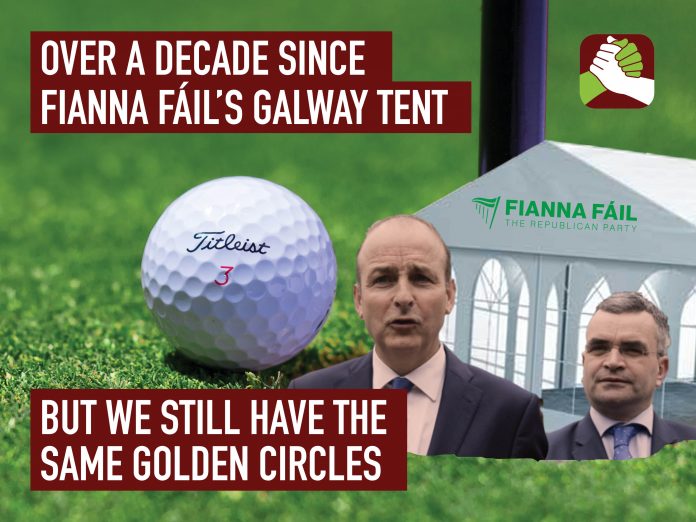 In a time of such uncertainty, at least we can rely on FF/FG to stay exactly the same.
10 years on from the infamous Galway Races Fianna Fáil tent, they remain as committed as ever to living in a world completely detached from the lives of ordinary people.

The notorious tent – where property developers forked out up to €4,000 for a table and a chance to cosy up to government ministers – may be gone, but as Golfgate has shown, we still have the same golden circles.

But something else has changed.

This is not the Ireland of the 1950s or even of the 1980s. This country has gone through a social revolution, and successfully challenged the iron-clad grip of the church and of the old civil war parties.

We rose up and defeated the water charges, we fought and won marriage equality and the Repeal of the 8th amendment.
The landmark February election was evidence of the huge shift that has taken place in Irish society.

And though the old civil war parties managed to cobble together a coalition government with the help of the Green Party, it has been beset by one disaster after another – the dying cries of an old order.

They may belong in the dustbin of history, but they need our help getting there.

We must organise quickly, to take on this disastrous government, bring them down and have another election.

Worryingly, the complete moral vacuum of our political establishment has created an opening that is being manipulated by more sinister figures such as the far-right’s Ben Gilroy, Hermann Kelly, and others who are using the enormous dissatisfaction to try and recruit to their ranks.

They couldn’t care less about creating a fairer society, but they are smart enough to cloak their politics of hate in the language of social equity, presenting themselves as champions of the people.

If we don’t organise to take on this disastrous government, we risk sending more people into the arms of these far-right figures.

That’s the only way we can defeat this government.

Leaving Cert Results Out Today – But College Fees Should Be Cut!