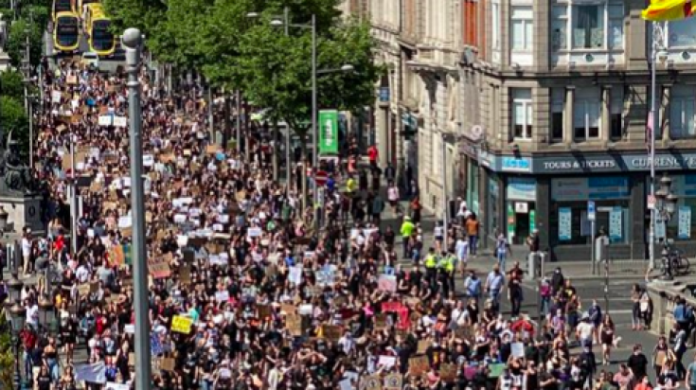 The new government of Fianna Fáil, Fine Gael and the Green Party is a huge disappointment for the many people who vote for change. The two right wing parties got only 43% of the vote but now they dominate the cabinet. Many voters wanted to break the cycle where they ran both government and the opposition.

The new government will attempt to put on a vaguely progressive mask but few will be fooled. Fianna Fáil and Fine Gael have a long record of looking after the privileged and the Greens will be used as a mudguard to cover their tracks. It should be remembered that the new Taoiseach, Mícheál Martin sat in a government that landed the people of Ireland with a €64 billion debt – which we are still paying off.

This coalition want to lock themselves into office for four and a half years – so that they have space to take unpopular measures. They will soon mount an attack on the Covid payments for workers and the unemployed. They will do little to protect construction workers who have just witnessed a High Court judge removing their legal protections. They will go back to a two-tier health system – and pay huge sums to the private hospitals. They will not impose rent controls or build enough council housing. In short, they will be an anti-working class government.

But they will have significant weaknesses. They do not have a  big enough support base  in Irish society to carry through unpopular attacks. They can be driven from office by mass mobilisations on the streets.

The coming together of Fianna Fáil and Fine Gael will also re-shape Irish politics on left-right lines.  As these battle-lines are drawn, we urge those members of the Greens who voted against coalition to leave that party now. Nobody with an ounce of left-wing ideas should play any part in supporting or excusing this dreadful government.

We need a left that will work with Sinn Féin but also offer a different, stronger politics. While Sinn Féin won considerable support from working people, they have a poor record on climate justice and actively supporting militant workers’ struggles. Their embrace of neoliberal policies in the North  stands in contrast with their rhetoric in the South. They have not ruled out the possibility of being in a coalition with Fianna Fáil or Fine Gael in the future.

This is why People Before Profit are reaching out to left wing activists from different backgrounds to invite discussions on how we can build a big, broad radical left party or co-operate with each other more closely.

In any such discussion, People Before Profit advocate for a number of key issues;