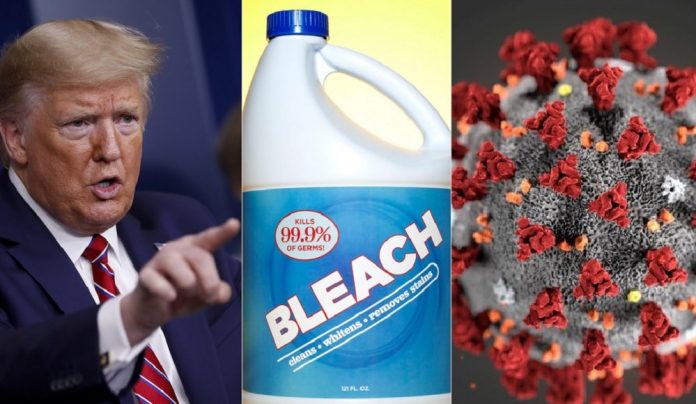 In a truly bizarre sign of the times, Dettol and Lysol manufacturers have had to issue a statement saying that people should not inject disinfectant into their veins, after President Donald Trump suggested it could be ingested to treat coronavirus.

‘’I see the disinfectant where it knocks [the virus] out in a minute, he rambled, in a characteristically nonsensical press conference. ”One minute! And is there a way we can do something like that, by injection inside, or almost a cleaning? … So it’d be interesting to check that. I’m not a doctor. But I’m, like, a person that has a good you-know-what.”

This might be amusing, if it wasn’t so dangerous.

This is a man who appears to have no problem contradicting himself – or medical experts – every other day. He initially downplayed the crisis even as it worsened, but has now withdrawn vital funding from the WHO after accusing them of “severely mismanaging and covering up the spread of the coronavirus,’’

Trump is now backing demonstrations protesting the “stay at home” orders (notably only in Democrat governed states), notwithstanding the fact that these restrictions were sanctioned and approved by the Federal government.

If none of this makes sense, it’s because, to Trump, it doesn’t have to. Concerned only with his own re-election prospects, he has completely failed to act in the public health interest. That anyone would regard Trump as an anti- establishment figure is an indictment of a society starved of healthcare, of a social safety net, and of a decent political alternative.

With Bernie Sanders ousted from the presidential race, working class Americans will have to look to other forms of political organisation, and building a radical left in the US that can break from the two party system of pro-capitalist parties.

The urgency grows with every passing day.