Lessons From Capitol Hill And From History 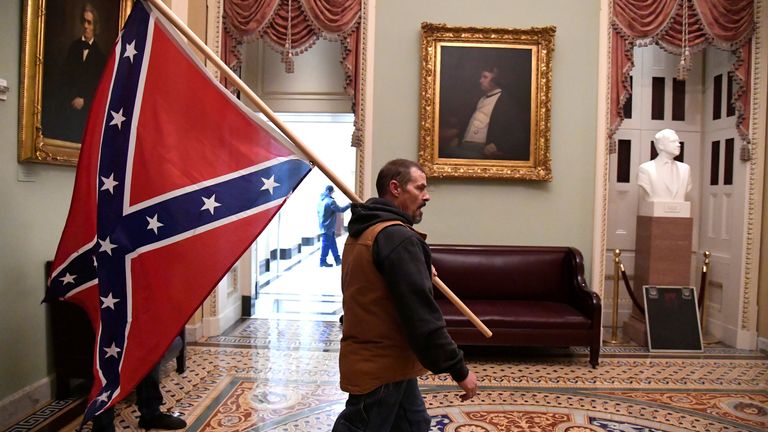 On Wednesday, thousands of Trump supporters stormed Capitol Hill in Washington D.C. in an effort to prevent the certification of Joe Biden’s electoral college victory. They met little resistance initially from law enforcement, some of whom appeared to be supportive of their actions. Eventually they were cleared out of the Capitol Hill building. John Molyneux writes on the lessons we can draw from Wednesday night and from history.

Let us assume for the moment that Trump is not just an infantile narcissist – he is that – but also has a serious political strategy behind what he is doing. In that case he would have known that the occupation of the Capitol by the demented followers he himself urged to march there, was not, and could not hope to be, a real ‘coup’ i.e. a real attempt to seize power.

Rather it was one further step in building and cohering a far right and fascist movement in the US with himself firmly positioned as its leader. For that he needs the ‘stolen election’ myth to be accepted as gospel, literally an article of faith, by his followers, paralleling the way Hitler used the ‘stab in the back’ theory to account for Germany’s defeat in World War 1. And for that Trump has to give a credible performance of believing it himself.

For those who would dismiss Wednesday’s events as just a pantomime, there is another historical parallel worth recalling: Hitler’s ‘Beer Hall Putsch’ of November 1923. In this Hitler and the SA (‘Brownshirts’ or Storm Troopers) surrounded a beer hall in Munich and from there he and about 2000 Nazis marched on Munich City Hall where they encountered a police cordon. Shots were exchanged killing 16 Nazis and 4 state troopers. Hitler fled the scene and was later arrested, tried for treason and jailed for 5 years but released after 8 months. In prison he wrote Mein Kampf.

Whenever one makes a historical parallel or analogy there are always people who will tell you the situation is ‘not the same’ and they are always right. The situation in 1923 was not at all the same as that in Washington yesterday in that Germany had been through five years of revolutionary upheaval that had overthrown the Kaiser and was actually closer at that time to socialist revolution than to fascist counter-revolution. But the point is not to make an exact comparison but to raise a warning. The warning is that Hitler who may have looked like a joker figure in 1923 nevertheless returned in triumph less than ten years later at the head of an SA which had grown to two million members. Trump, or someone similar, may hope to do the same.

Another point that needs to be made here is the role of the police and the state. Many people pointed out the different response of the cops to Trump supporters from that to Black Lives Matter protestors, but this is not only a question of ‘white privilege’. For example, the response of the police to protests at the Chicago Democratic Convention in 1968 was one of extreme brutality – and they were overwhelmingly white. Yesterday it is clear there was actual sympathy between many of the cops and the fascists which allowed them into the Capitol and it is likely there was collusion higher up the command chain. Similarly, there was always sympathy for the Nazis among sections of the German armed forces and police and in response to the terrible economic crisis of the Great Depression following the Wall St Crash , along with a major shift on the part of big capital, this hardened into actual active support which lifted Hitler into power.

For this reason it would be folly for the US left to say leave it to the police, or leave it to Biden, the Democrats and the ballot box. These are not forces which can be relied on in future crises – of which there will be many of growing severity – to stand against fascism. Rather what is crucial is to build on the ground as strong as possible an anti-fascist united front capable of driving back the US far right and as strong as possible socialist movement in the US working class to present a real alternative to decaying US (and world) capitalism.