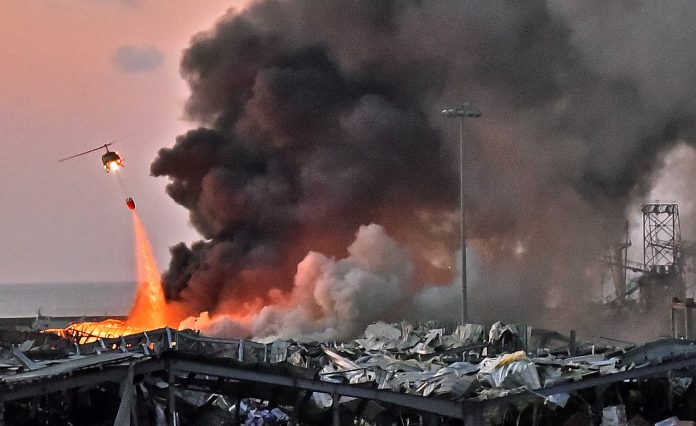 Since this article was first published by Global Ecosocialist Network four days ago the Lebanese people have risen in a great popular revolt that has forced its deeply corrupt sectarian based government to resign. People Before Profit naturally stands in solidarity with this revolt. However, as this article shows, this is by no means just an issue for Lebanon.

In saying that the terrible explosion in Beirut is an ecosocialist issue I am not counterposing this claim to the fact that this is also an issue of corruption, of government incompetence, of health and safety and many other things.  I’m making the point that, like Covid and climate change, it is a symptom of the utterly distorted, toxic and disastrous relationship between human society and nature, i.e. our environment,that capitalism has brought about it.

Just as coal, oil and gas companies have been plying their deadly trade without regard for its impact on the environment and hence on humans,  and just as  innumerable capitalist companies are filling the oceans with plastic, poisoning rivers and water supplies, depositing damaging  waste materials in dumps near to centres of human population around the world , so the system and its various profit driven components are busy transporting potentially deadly cargoes across the oceans of the world with a view to unloading them in the Global South where, they hope, no questions will be asked.

There is no need for special research or investigative journalism to reveal the utterly scandalous nature of what has happened. The barest facts already out there in the public domain, for example on the BBC website, are more than enough to point both to the shocking practices involved in this particular case and to the everyday nature of these practices in a capitalist world of international profit maximisation.

Let’s start with how dangerous the ammonium nitrate which exploded was. Prof Andrea Sella, Professor of Inorganic Chemistry, University College London is quoted by the BBC to the effect that:

“When ammonium nitrate explodes, it can release toxic gases including nitrogen oxides and ammonia gas. The orange plume is caused by the nitrogen dioxide, which is often associated with air pollution. If there isn’t much wind, it could become a danger to the people nearby.

“On its own, ammonium nitrate is relatively safe to handle. However, if you have a large amount of material lying around for a long time it begins to decay.

“The real problem is that over time it will absorb little bits of moisture and it eventually turns into an enormous rock  This makes it more dangerous because if a fire reaches it, the chemical reaction will be much more intense.”

Then there are the facts stated by Mr Trevor Lawrence, Senior Lecturer and expert in explosives and munitions at Cranfield Ordnance Test and Evaluation Centre (COTEC), Cranfield University:

“Poorly stored ammonium nitrate is notorious for explosions – for example in Oppau, Germany; in Galveston Bay, Texas; and more recently at West in Waco, Texas; and Tianjin in China.

“Explosions are typically detonations that cause huge damage due to the supersonic shockwave, which is clearly visible in the videos.

“Detonation of ammonium nitrate does not require additional fuel but is often set off by an initial fire which then causes the bulk material to blow.

“The orange plume above the explosion site is due to nitrogen dioxide, the toxic air pollution gas, and is a tell-tale sign of a nitrate-based explosion.

“The idea that such a quantity would have been left unattended for six years beggars belief and was an accident waiting to happen.”

“It is used widely in fertilisers and also commonly as an oxidiser in home-made explosives. Normally it needs the addition of a fuel to produce an explosive, but under some circumstances it can detonate.”

Then there is the question asked by the BBC, has anything like this happened before? You bet it has. Says the BBC:

“In 1921, about 4,500 tonnes of ammonium nitrate caused an explosion at a plant in Oppau, Germany, killing more than 500 people.

“The deadliest industrial accident in US history occurred in 1947 at Galveston Bay, Texas. At least 581 people were killed when more than 2,000 tonnes of the chemical detonated on-board a ship which had docked in the port

“More recently, an explosion involving ammonium nitrate and other chemicals killed 173 people in the port of Tianjin northern China in 2015.”

So how did this deadly cargo get to Beirut? The BBC reports:

“Lebanon’s government has blamed the huge blast that devastated parts of Beirut on the detonation of 2,750 tonnes of ammonium nitrate stored at the city’s port.

“The government has not named the source of the ammonium nitrate, but the same amount of the chemical arrived in Beirut in November 2013 on a Moldovan-flagged cargo ship, the MV Rhosus.”

The frightening implication of this is that it is certainly possible that there was more than one ship carrying thousands of tons of ammonium nitrate that came to Beirut. Was it perhaps a regular occurrence? The BBC continues:

So it was Russian owned but under a Moldovan flag.  Why was it going to Mozambique? The BBC doesn’t bother to ask but the overwhelmingly likely answer is that it was going to Mozambique because that was somewhere where no questions would be asked. As the story continues it becomes almost surreal.

While sailing through the eastern Mediterranean the MV Rhosus suffered “technical problems” and was forced to dock at Beirut’s port, according to a 2015 report for industry newsletter Shippingarrested.com that was written by Lebanese lawyers who represented the crew.

The Rhosus was inspected by port officials and “forbidden from sailing”, the lawyers said. Most of the crew were repatriated, except for the Russian captain, Boris Prokoshev, and three others…

Mr Prokoshev told Reuters news agency on Thursday that the Rhosus was leaking but seaworthy at the time, and that it was sent to Beirut by its owner to take on an additional cargo of heavy equipment because of financial difficulties.

Note, the Rhosus with 2,700 tonnes of deadly explosive on board, suffered ‘technical problems’ i.e. it was leaking! Note also the claim of the captain, ‘It was leaking but seaworthy at the time’! And it was sent to Beirut by its owner ‘to take on an additional cargo of heavy equipment’! Then:

However, the crew could not load the equipment safely, and when the ship’s owner failed to pay the port fees, the Lebanese authorities impounded it, he said.

In other words if the owner had paid the port fees it might well not have been impounded but allowed to continue on its reckless journey to Mozambique.

Shortly afterwards, the Rhosus was “abandoned by her owners after charterers and cargo concern lost interest in the cargo”…

They ‘lost interest’ in the cargo!  And what about the crew who were at risk of their lives every minute they were on board?

Meanwhile, the crew still confined to the vessel were running out of food and supplies. The lawyers said they applied to the Judge of Urgent Matters in Beirut for an order authorising them to return home, emphasising “the danger the crew was facing given the ‘dangerous’ nature of the cargo” in the ship’s holds. [My emphasis]

So everybody – the owners, the captain, the crew, the Port Authority, the Lebanese officials  – knew they were sitting on a time bomb but when there was no longer money to be made, they just ‘lost interest’.

Obviously there are Lebanese officials who were deeply negligent (maybe they were paid to be negligent), are culpable and must be held to account. But, equally obviously, these particular negligent and culpable officials are merely the tip of an iceberg of such negligent culpability. It is the routineness of it all that stands out. How many unsafe ships of dubious ownership, under false flags, are sailing our oceans, polluting them as they go, endangering their desperate crews and threatening lives in every port they enter? Obviously the question cannot be given a definite answer but it is likely to be many thousands.

In a way the story of the MV Rhosus and the catastrophe in Beirut is a hideous metaphor for the behaviour of our whole profit driven system of international capitalism which in its institutionalised negligence is set to destroy not one port, hundreds of lives and thousands of homes but innumerable ports and coastal regions, vast areas of agricultural land and the lives of countless millions in the not distant future.

That is why the Lebanese explosion is an ecosocialist issue. Because we must heal the rift with our environment, stop treating it as a limitless dumping ground for deadly toxins, or die.