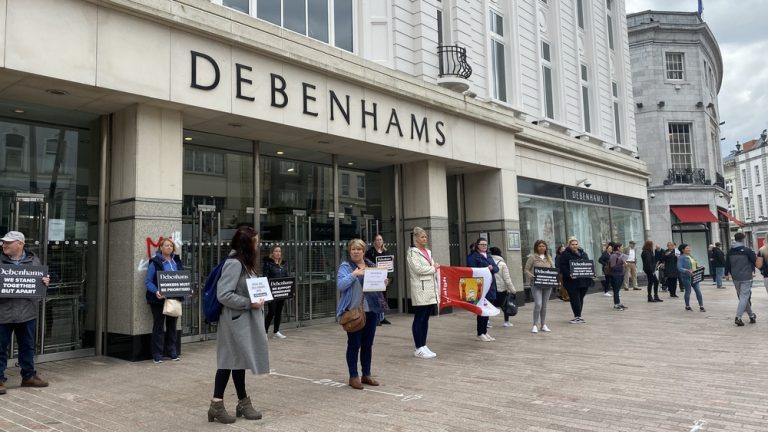 Last Sunday the Sunday Business Post carried an interview with Andrew O Leary and Kieran Wallace of KPMG, the liquidators of Debenhams. In a fairly wide-ranging piece, they were allowed, unchallenged, to give their version of events and, in effect, disparage our campaign for our entitlement to two additional weeks redundancy pay in addition to statutory redundancy (2 plus 2). They tried to present themselves as the good guys only trying to do the right thing in a difficult set of circumstances. As one of the workers, Suzanne, wrote to us “That article showed KPMG as being decent, honest, intelligent, honourable, sincere, sympathetic and we are portrayed as unreasonable, stupid, unrealistic, violent and harassing”.

Given various comments in the piece we believe, as the shop stewards representing the Debenhams workers, that we must respond.  There are several issues we want to address:

1. Perhaps the most serious allegation is that “some of the protesters’ activities began to cross the line at various times” and that levels of “antagonism and personal abuse of” of haulage drivers were at levels they have not seen before. Further, they claim, people were followed home. O Leary then claims that it was not the workers who were doing this but that “I’m just saying it is happening.”

The intention is clear here.  He wants to undermine our whole campaign, throw around serious allegations but pretend, as he does throughout the whole article, that he is a friend of the workers.

It should be clear to anyone who has engaged with our campaign that we have conducted a dignified and disciplined campaign using methods that are normal in trade union disputes and which workers in disputes have used for decades. Our objective was always clear: to keep the stock in the shops until we reached a just settlement. This was the only way we could get KPMG to engage with us.  Our approach was to persuade drivers not to pass our pickets. This was generally successful with many drivers turning away when the dispute was explained to them.  Where they didn’t we peacefully prevented the stock from being removed. No arrests were made as a result of our normal picketing activities prior to the Garda onslaught on the Henry Street pickets on April 22nd.  The test of our approach has been that we have retained huge public support throughout the dispute.

2. What’s not given enough attention in the article is the tactics that have been used to break our pickets. Throughout the dispute lorries and trucks have arrived at all times of the day and night.  Women picketers have faced intimidation and threats including from security staff hired by KPMG. The mobilisation of the Gardai to break the Henry Street picket ranks as one of the largest in the history of industrial relations with many women picketers being dragged from the pickets at the behest of KPMG. Where is the condemnation of this in their interview? How do they explain their activities in packing and moving stock in the midst of a Level 5 lockdown when all non-essential retail was closed?  Their silence on this, in such a long interview, is remarkable.

As is their failure to tell the public that for a year we have been trying to gain access to our personal belongings which were in the stores when we were told by email that our jobs were gone. We were effectively locked out of our workplace as we were on temporary layoff at that stage. While they also said they felt bad for the workers, never at any point, even as a gesture of goodwill would they allow the workers back in to collect their belongings or personnel files even from the stores. We are still waiting.

3. We have always sought and were prepared to agree to a just settlement of this dispute. Kieran Wallace says “if there was any possibility at all that we could have done a negotiated settlement that would have worked for the parties, we would”. Yet earlier in the interview, he says that they could not “actually do” the things the workers were demanding, such as ring-fencing a certain amount of cash for them. The reality is that only as a result of keeping the stock in the stores was KPMG forced to make a proposal that might have seen €1m going to the workers.  The problem was, as Wallace admits, it just wasn’t enough.  But he is wrong when he says we refused to vote on it. That was not the stated position of the shop stewards.  KPMG withdrew the offer before it could be voted on.  We never saw a final set of written proposals.

But the offer of €1m showed that what the workers were asking for was possible. It was possible as in Clerys and IBRC to allocate resources to meet works demands for payment for their entitlements.  The sale of the stock, as we demanded, could have been used to generate resources to meet the workers demands. At all stages, we have contested the valuation of the stock at €11m.  If KPMG had moved to reach an early settlement with us much greater value could have been realised than will be now.  Further, we were led to believe by Debenhams management that monies from the online business would be available to us.  Mr Wallace says that maybe if he had a direct relationship with us right from the beginning “it would have been better”.  We were always available and willing to take part in any process that would have led to a just settlement for us.

4. KPMG now want to claim that liquidation has proven very costly and could be “well above €20m”.  They want to give the impression, which has been reported on various media outlets in recent days, that our actions added €3.5m to the costs because of a €250,000 per month holding cost.

We want to make a number of points here:

-Like the Tánaiste and Taoiseach KPMG say the payment of our statutory entitlements cost the state over €13m.  But in fact, the workers are just getting back what they paid in PRSI over the years.  We estimate that the Debenhams payroll bill was around €29m in 2019 with the workers paying just over €1m in PRSI. Another €2m was paid in employers PRSI.  And that was just for one year. Some of these workers have been working for over 20 years. The cost of their statutory redundancy is well covered.

-The €3.5m additional costs assume that it would have taken no time to complete the liquidation which makes no sense.  As all agree, this is a complicated process in which Debenhams refused to allow online sales to be returned to the Irish arm of the company. Debenhams UK is still claiming ownership of the stock in the 11 Irish stores. KPMG might be better directing their fire at the obstructive behaviour of Debenhams. Then there was the Pandemic and the additional restrictions this may have placed on KPMG. But the reality is that an early resolution of the dispute could have seen these resources used to meet the workers just demands.

5. Finally, we might agree with Wallace and O Leary about the need for legal changes to address the rights of workers laid off due to liquidations.  But it is noteworthy that when asked if they would like to see legal changes that moved workers up the priority order of creditors “both men demurred” but in reality what they say in the rest of the interview suggests they oppose it as it might affect the entitlement of banks. This gives us an important insight into how the business establishment (of which KPMG are a part) is thinking and why the law has not been changed. Our political and business leaders don’t want the law to change.  That why it’s important that all TDs are lobbied to support the Solidarity-PBP Bill, introduced into the Dail by Mick Barry TD, to reorder the priority of creditor so that workers’ entitlements come first

In conclusion, we are very proud of the stand we have taken. We have stood up for ourselves and the rights of all workers. We have put the Duffy/Cahill report right back on the political agenda. We can’t allow the representatives of a large multi-national accounting company, which profits from the plight of workers like us, to take anything away from that.  The reality is that they did not want us to win and need to undermine our campaign so that it does not provide a  precedent or inspiration for other workers to follow.