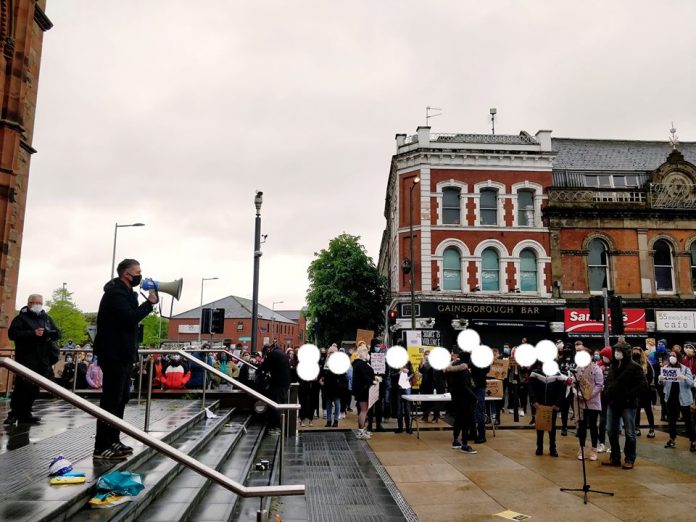 “We called on the Derry and Strabane Council full meeting today to suspend standing orders to discuss our motion criticising the PSNI’s response to Black Lives Matter rallies in Derry and Belfast.

Unfortunately, 80% of Councillors are required to suspend standing orders. However, thanks to Cllr Gary Donnelly’s request for a recorded vote we at least have a record of those parties and Cllrs who refused to have the discussion.

We need to hear directly from the Justice Minister. We need to know if Arlene Foster and Michelle O’Neill stand over what the PSNI did in Derry and Belfast? Do they agree the PSNI’s actions were ‘proportionate’ as Naomi Long claims? The Justice Minister and the office of FMDFM have questions to answer.

We will continue to press for accountability and to demand all charges made on Black Lives Matter organisers are dropped.”

Motion to Derry and Strabane Council from People Before Profit Cllr Eamonn McCann:

Council agrees the PSNI response to Black Lives Matter rallies was in no way – as claimed by Justice Minister Naomi Long – proportionate.

Council agrees the Black Lives Matters protests were criminalised and treated differently from many other events.

Council agrees the harassment, intimidation and criminalising of Black Lives Movement organisers – members of our Black and minority communities – was a blatant and shameful example of institutional racism.

Council commends the efforts by organisers to maintain social-distancing with spacing, masks, gloves and sanitiser. Council agrees the PSNI through its actions disrupted these efforts.

Council supports the Black Lives Matter movement and calls for all charges and fines imposed on rally organisers and those attending be rescinded immediately.